How to rotate/duplicate a curve around another curve object in 2.8?

I'm trying to rotate and duplicate the spokes around the axle in the center. This is supposedly possible with the array modifier, but I can't get it to work correctly for me.

When I select the axle as the "object offset" the duplicates just stack on top of each other rather than moving or rotating.

The objects are curve circles with linked curve bevel objects.

Is this a curve related issue, or something messed up with origins?

What am I missing? 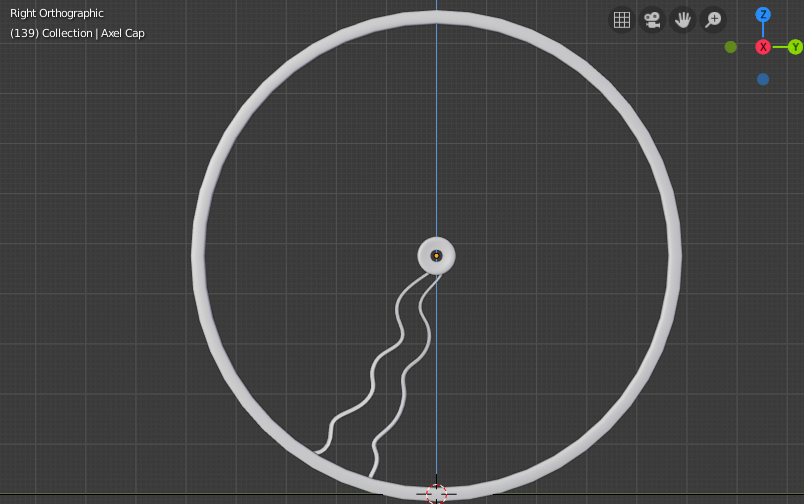 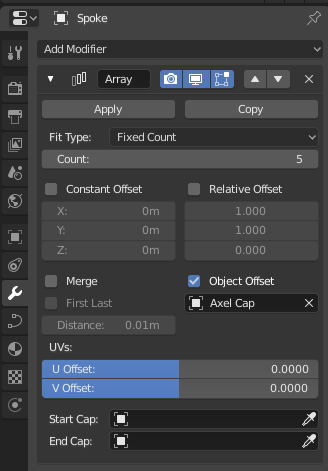 I've added a third picture. Here's the specific things that I'm not understanding: 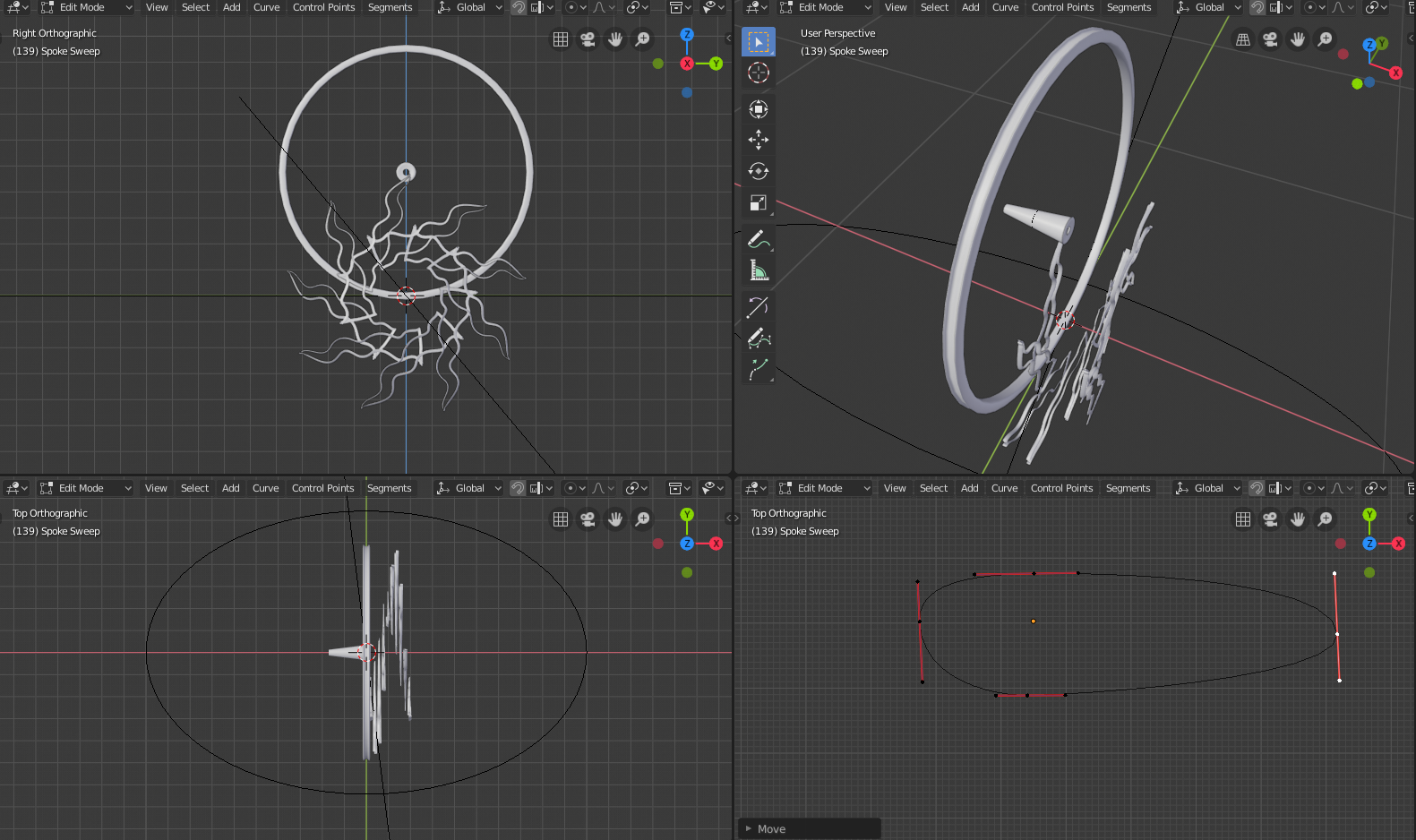 This still isn't working for me. Ive set the 3D cursor, snapped the origin of the spokes to the cursor location, centered the empty on the cursor, and still, when I rotate the empty, the spokes go flying off into space like this: 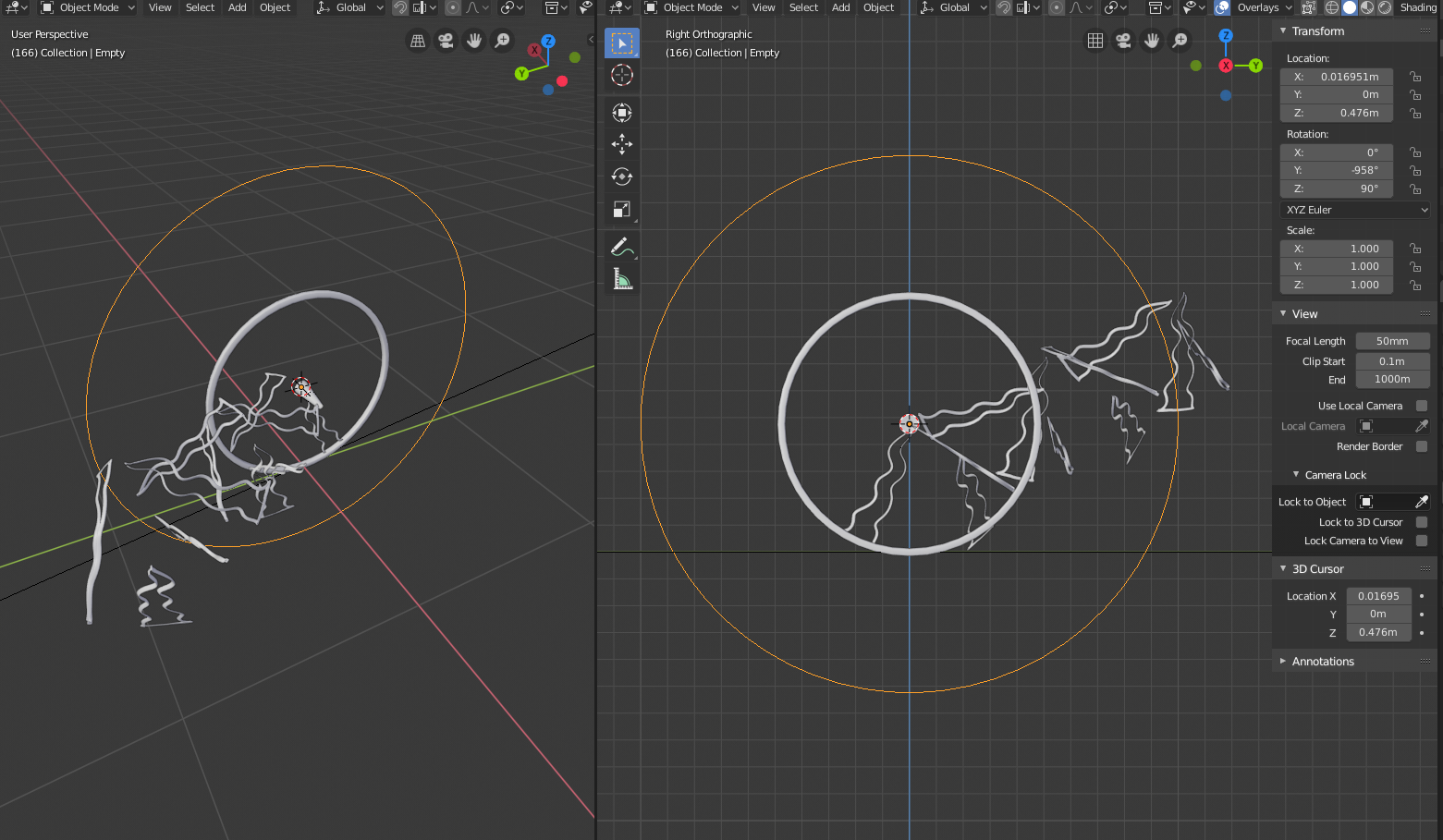 Add an Empty at the center of the wheel.

Set the array modifier to use the empty as Object Offset.

Set the relative offset to $0$ in all axis.

Rotate the empty to taste.

After a lot of experimentation, I've gotten this working. There's a lot more steps involved in getting this to work right when working "somewhere else" on the model besides the global origin (0, 0, 0) coordinate in a new file.

The object "origin" of the spoke affects where the rotation occurs around, so you need to set the spoke object's origin to the point on the object that points toward the thing you want it to spin around. ie. the origin of a bike spoke should be the center of the axel, which is likely outside the spoke object.

First, select the spoke and go into edit mode. Then select a vertex on the spoke nearest to where it connects to the axel.

Press Shift + S and then cursor to selected.

Tab to exit edit mode. Select your axel then Shift + S, cursor to selected. This puts the cursor at the middle of the axel.

Now change just the x axis of the cursor to what you wrote down before (the axis than needs modified here will change based on what axis you are working on).

In object mode, select the spoke, and then F3 to search (because the ctrl+alt+shift+c hotkey is missing in 2.8?), then origin to 3d cursor.

This sets the spoke's origin to the 3d cursor's location. Do not move the cursor yet.

Insert (Shift + A) an empty -> plane axis. This inserts the empty at the rotation point, which is also necessary for proper rotation.

Press 3 to go into side view. You must do this in side view so you rotate the empty on only one axis.

Rotate the empty. It will spin duplicate the spokes properly now.

So the important things to remember are: