I've been trying animate a large amount of objects based on location and frame data from an excel sheet. So far I've read through a dozen different threads both here and other forums, but I'm just not able to understand how to do it. My only previous coding experience is only a small amount of html/css, so having a slightly hard time wrapping my head around this. 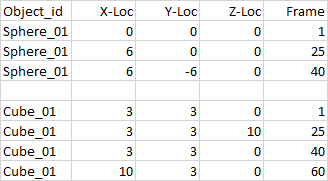 This is what I use to test on. The goal is to have the script select each object, set its location at a specified frame and keyframe it. So that I can then manually tweak the transition between them if needed.

So far this is the code I have so far, partially copied from here. And i somewhat understand what it does, I think, it at least moves the sphere in the scene.

Would greatly appreciate it if someone could point me in the right direction.

Not the answer you're looking for? Browse other questions tagged python animation csv or ask your own question.