AN - How to create path for moving an object or an outline?

I saw this diagram in Pinterest: lovely maths to create polynomials. I wonder how to use Animation Nodes to move objects on the paths like those below — or even how to create outlines. Being respectful of your time, I'd be interested in one or few examples. Whatever else you suggest is welcome.

Thanks for posting this question. The animation you found is very cool, and a fun practice project with animation nodes.

I made this mockup with just two circles, but the method can easily be extended to as many circles as desired. Here are the AN nodes, in detail. 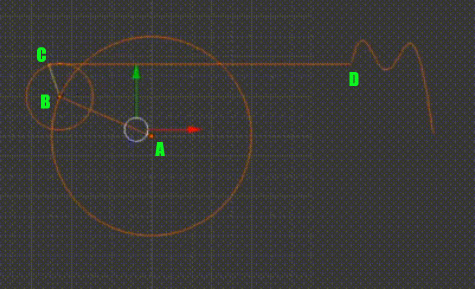 The animation is built around the large central circle centered at point A (0,0), which is a Bezier curve. Since the circle is a bezier curve, you can use the AN Evaluate Spline node and find any point along the curve. 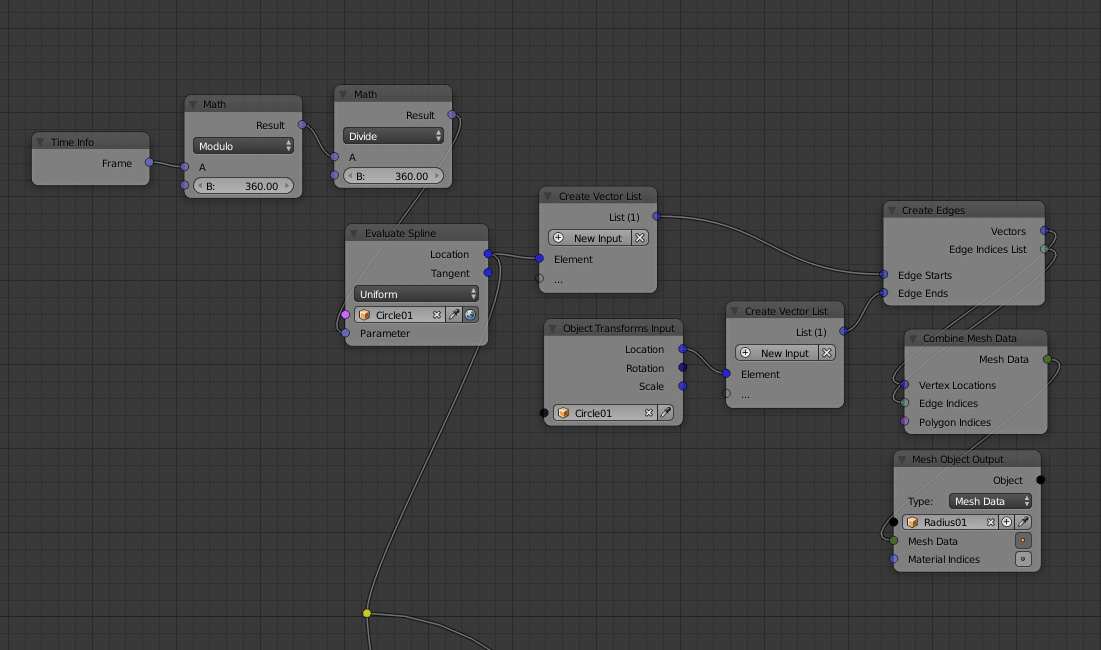 Using the center point of the circle and the animated point on the perimeter, draw radius line AB. 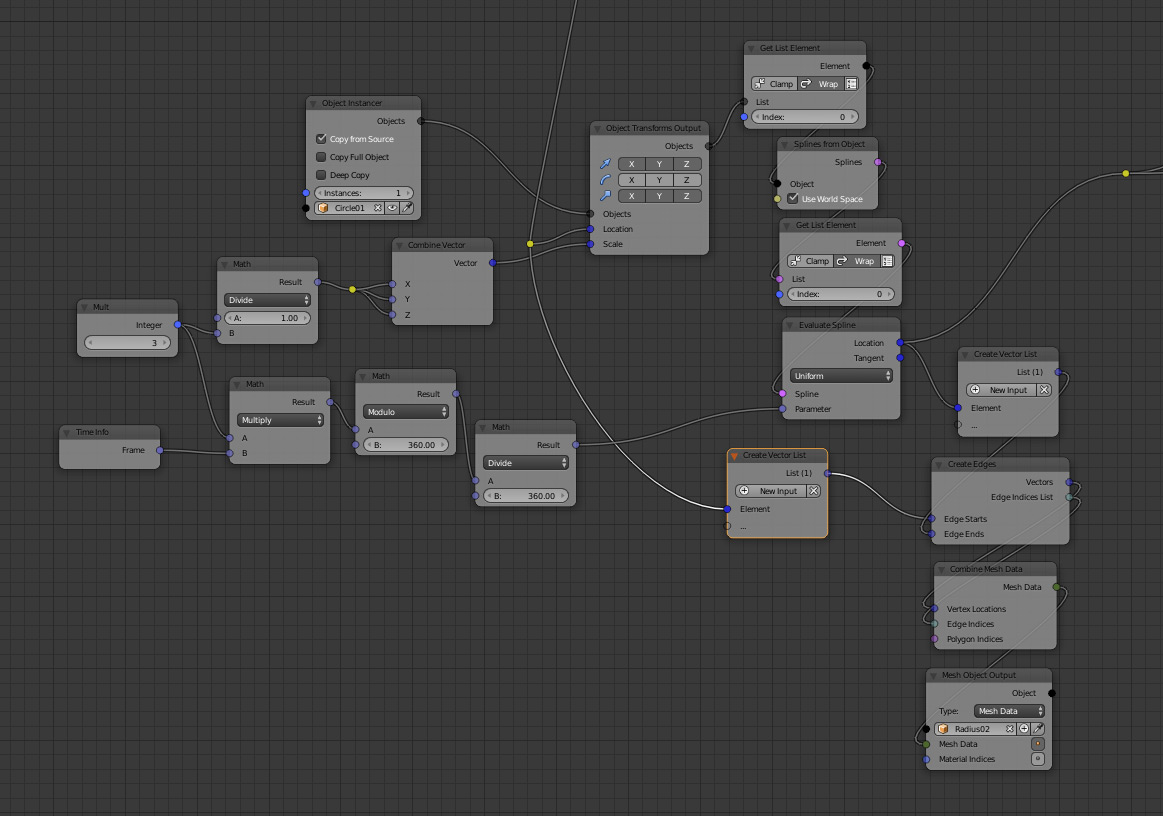 Use the Object Instancer to create a copy of the circle. Using Object Transforms Output, rescale the second circle to 1/3 of the original size, and change location to point B. As before, animate point C along the smaller circle, but this time using Frame/120 since it rotates 3x as fast. Draw radius line BC as before. 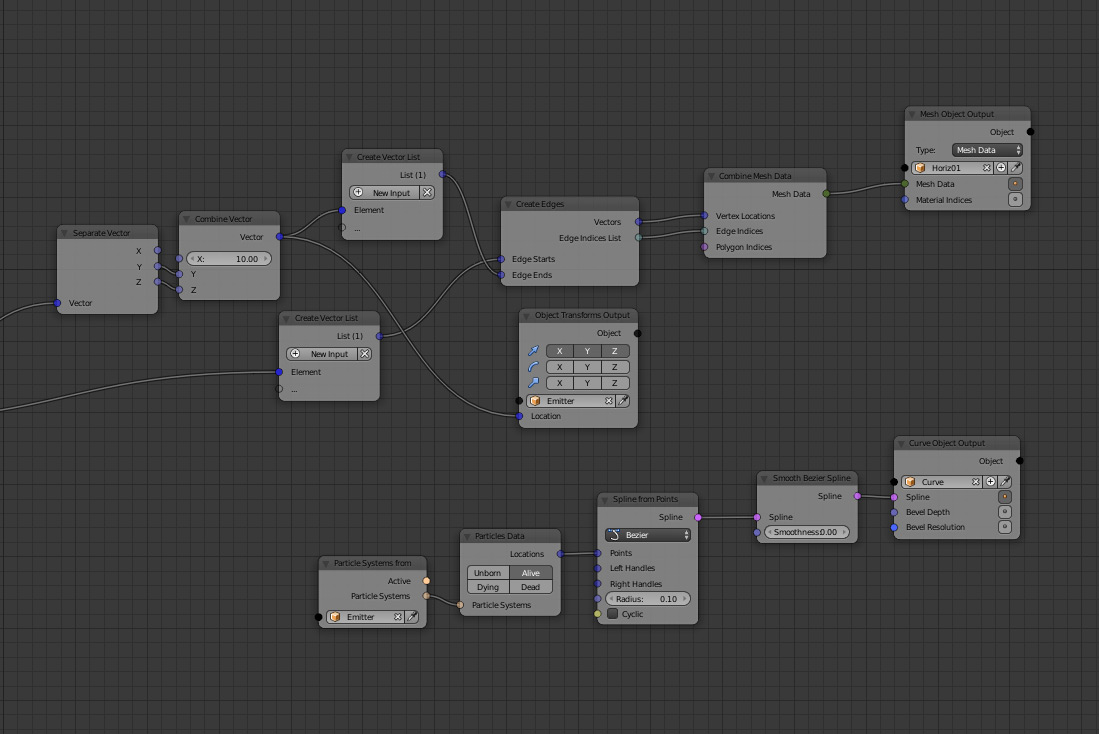 As D moves, it creates the curve E. A very small plane is set up as a particle emitter, and its location is updated to follow point D. Over time, emits particles which move to the right at a steady rate of speed.

By joining these particles into a spline using Spline from Points node, then smoothing it a bit, a nice curve emerges. 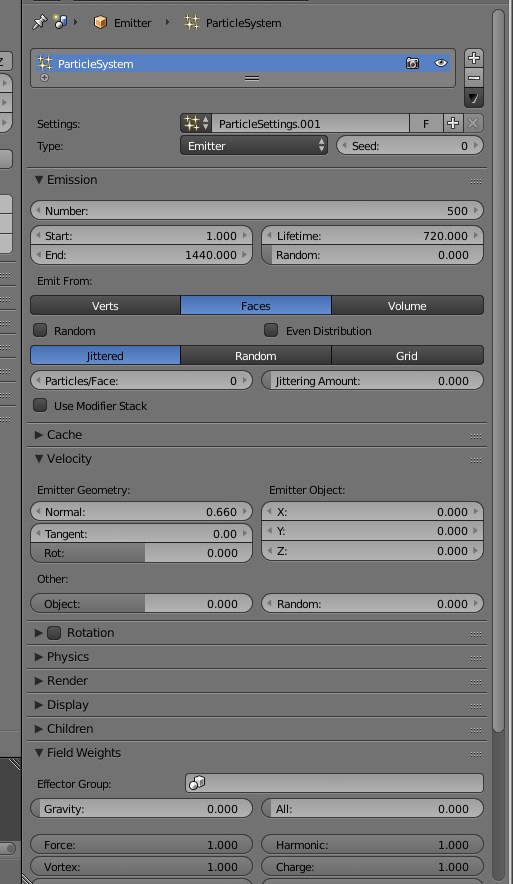 Here are shows the emitter settings I used. Note that gravity is set to 0, and the particle velocity has a positive velocity on the Normal, dimension, so it emits directly out of its face, but 0 otherwise. I've rotated the emitter so that it faces to the right (+X) in the diagram, so it will emit from it's face, in the +X direction.

Here is the .blend file. It was created in Blender 2.79, using Animation Nodes 2.0.4. I don't know if it's compatible with the more recent Blender or AN, but I hope you could reproduce this animation if needed.

4
Input 3D line segments from real scientific data
1
Object Data Path Input node needed in Animation Nodes
2
How can I prepare a set of colors that should go together, and be able to apply them to different objects with a single click?
3
Animation Nodes: How can I apply a different matrix to every point in a mesh
4
Render 100k objects each with independent color and scale through time
3
Maths — how to create moving waves with Animation Nodes
2
Sequencing Animations in Animation Nodes
4
How to convert equations to work with Blender and animation nodes?
1
Animation Nodes: Allign object to direction of vector path/Line path