I’m trying to create a door & key system in the BGE, but I’m struggling with the game logic.

I followed a video tutorial to understand the basics, but I found that method doesn’t scale very well since it doesn’t take into account (1)different keys being required for different doors, (2)some doors not requiring keys, or (3)the ability of non-player characters to open doors (planning to add this later).

The approach I’ve come up with is as follows.

Each door sensor listens for 3 conditions:

The door sensor is basically working. If its conditions are met it will cause the door to open. The key is able to be picked up, and send some message (“got_key_a”).

What isn’t working is that the door sensor collision can’t seem to be set to evaluate whether property “has_key_a” is True. Instead it simply sees that the property exists on the colliding object (Player), and lets them open the door regardless of whether they’ve acquired Key A.

Another approach I tried was sending a Message rather than using a property. The problem there seemed to be the timing of when the message was sent. I guess that the message being sent once doesn’t satisfy the condition… rather the message must be sent at the same time the other conditions are checked for. Since it is never the case that a a key is acquired at the same moment the corresponding door is tried, this approach does not work.

Screenshot just in case it helps:

I am open to Python-based solutions too, as long as the code is thoroughly commented so that it can be easily understood.

I think my problem lies here. Instead of sending a signal only when has_key_a is True, it sends a signal if the property has_key_a exists.

I want has_key_a to be evaluated, but inserting expressions in the Collision Sensor is not allowed. What can I do instead?

If I use an Expression here I am unable to get it into the And controller. I must choose one or the other, but what I need is to combine them.

The door must be able to detect a collision with player who has_key_a==True and tries to interact at the same time.

I set up a Player and a Non-Player Character (NPC) which could just as easily serve as Player 2 in a 2-player game. Here I used it just for testing, although in a game it could serve as a scripted enemy or ally, or whatever. The point is that it can acquire keys just like the Player can. 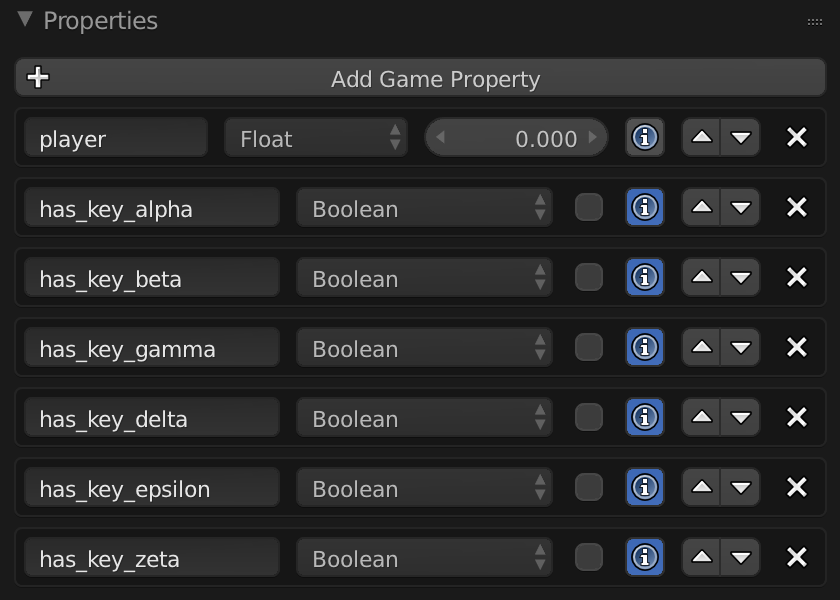 These Boolean values go from 0 to 1 (False to True) when a key is acquired by the character.

(NPC has the same Properties as Player, except that it has the Property npc instead of player.)

Each character has its movement controls and an interaction control which can be used to (among other things) open doors when it is near them, and has the required key. Interaction from each character sends a unique message (either player_interact or npc_interact).

In order to add multi-key support, each character has a Sensor for each key, which all get fed into a Python Script Controller (keys.py).

The key objects themselves don't play a very active role in the logic. If touched by something having the property player or the property npc the given key will disappear.

Each door object animates through various States, the important thing being that animation is initiated upon receiving a Message unique to that door (open_door01, open_door02, and so on).

Each door has a corresponding sensor object that is an Invisible physics Ghost. It's just an area within which collision can be detected, as one condition that needs to be met for a door to be opened. 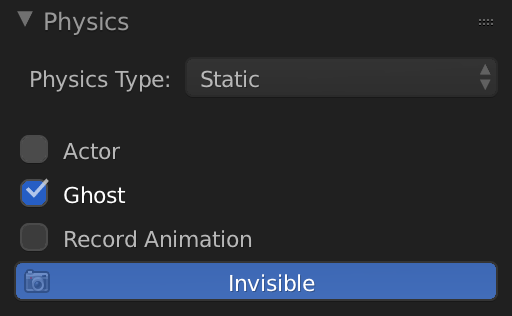 We don't want it to be possible for a player to open a door from across the room - unless that door is intended to be opened by a remote switch, in which case the sensor can be moved to the location of the switch instead of surrounding the door.

(1) Checks if a character is colliding with the sensor object (using two Collision Sensors that listen for player and npc Game Properties respectively), and (2) Checks if the character is attempting interaction (by listening for either a player_interact or npc_interact Message). This input gets routed to a Python Script Controller for that specific door type (door_alpha.py, door_beta.py, and so on).

Someone with better programming skills than myself could surely find a way to eliminate the need for individual scripts for each door/key type, but at least this works. It just requires preparing one .py script of each door/key type by doing a Find/Replace in a text editor to change require_key_beta and has_key_beta to require_key_gamma and has_key_gamma... if you follow what I mean. I've only prepared Alpha and Beta types for this demo, since there are only two keys. How many key types do you realistically need? (6 should be plenty?)

The resulting output of the Python script (example:door_alpha.py) from the given door sensor object will activate a Message Actuator, which will send a Message with a subject such as open_door01, which I mentioned earlier.

Here are the parts of that code to pay attention to:

and within the IF statements:

You know how the rest goes - corresponding door object receives the message, the animation of the door opening is triggered. Our player progresses and presumably has fun.

As for the animation of the doors, there are several ways to do it. Most will involve switching States. On my doors there are four States: Initial, Opening, Open, Closing. Closing loops back to Initial, in other words Initial is the same as Closed.

States can't be labeled directly, but labeling the State Actuator's destination makes it easier to keep track of what State should come next (In mine, the State Actuator of Initial is labeled "To Opening", for example).

Door01 is basic, using Delay Sensors and Motion Actuators. For Door02 I wanted more control in animating individual parts of the door, so it makes use of Property Sensors (that evaluate if the Property frame is equal to a given frame, then change the State accordingly) and Action Actuators that play specific frame ranges of the animated Action and set the value of frame. Because Door02's animation is done using Actions, it is actually an Armature Object, with Mesh Objects parented to its animated Bones.

I think that covers everything. Enjoy playing with the .blend. If anyone has questions, comments, or ideas for improvement, I'm all ears. 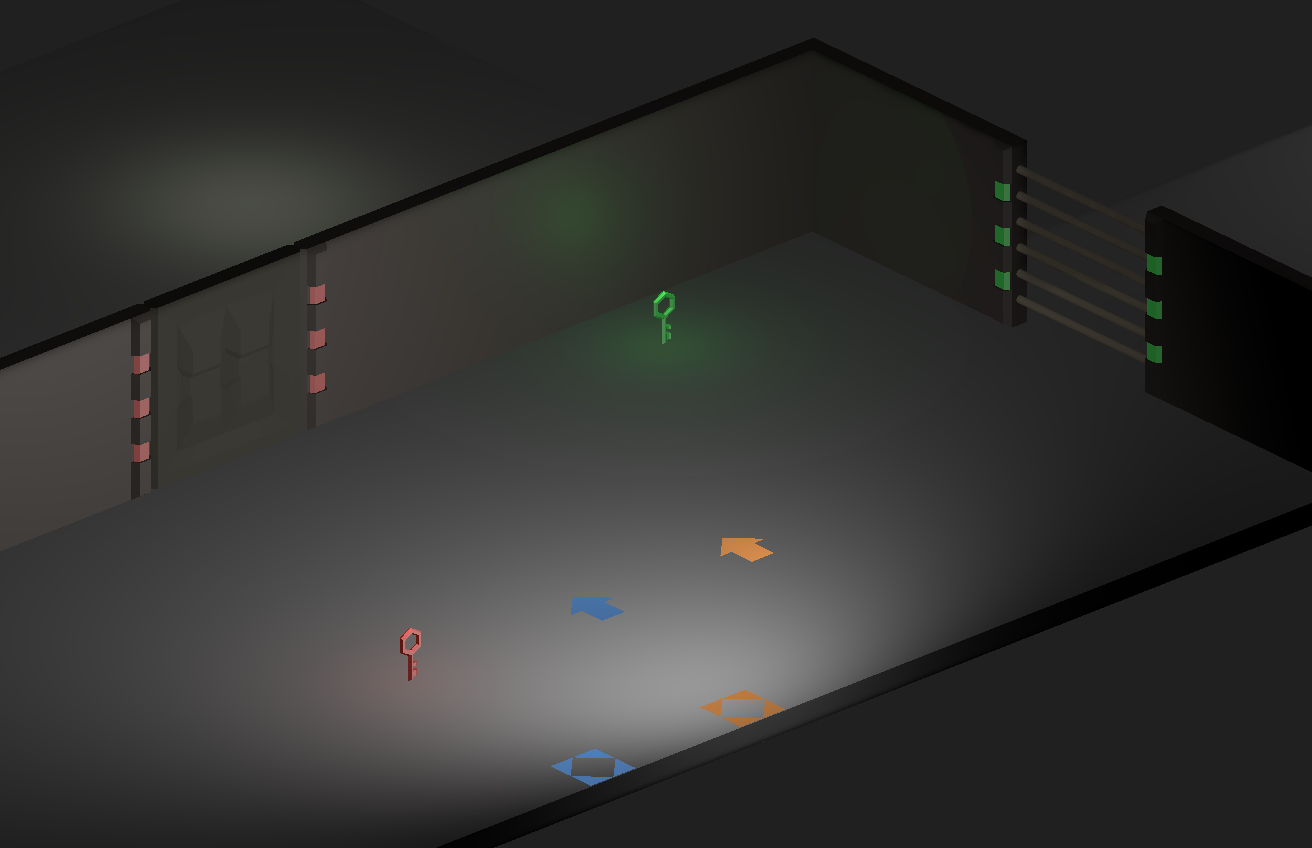 5
Manipulate BGE logic bricks through python
3
BGE, logic bricks, setting up a timer (that reverses at some point)
3
"skip" renamed to "frequency" in BGE logic bricks?
1
Delay like a charging key BGE
0
BGE how to move the inventory up and down with logic bricks
0
Collision logic brick not detecting collision in BGE
0
BGE: Getting rigged door mesh to update for collisions
0
Key Delay In Logic Editor
0
Wrong door behavior in an BGE game