What I want to do is use a copied version of the low poly tank to add extra detail to it and then bake a normal map from the high to the low poly model.

I am used to the baking procedure in cycles render with small objects (like a cube for example). That means I am familiar with the setup (image, node etc.), ray distances and so on. Let's say the basic of basics of baking a normal map in Cycles Blender.

The Problem: It starts right away. I moved the copied tank (haven't added any detail to it yet) to the same position the low-poly has and I get this as a normal map: 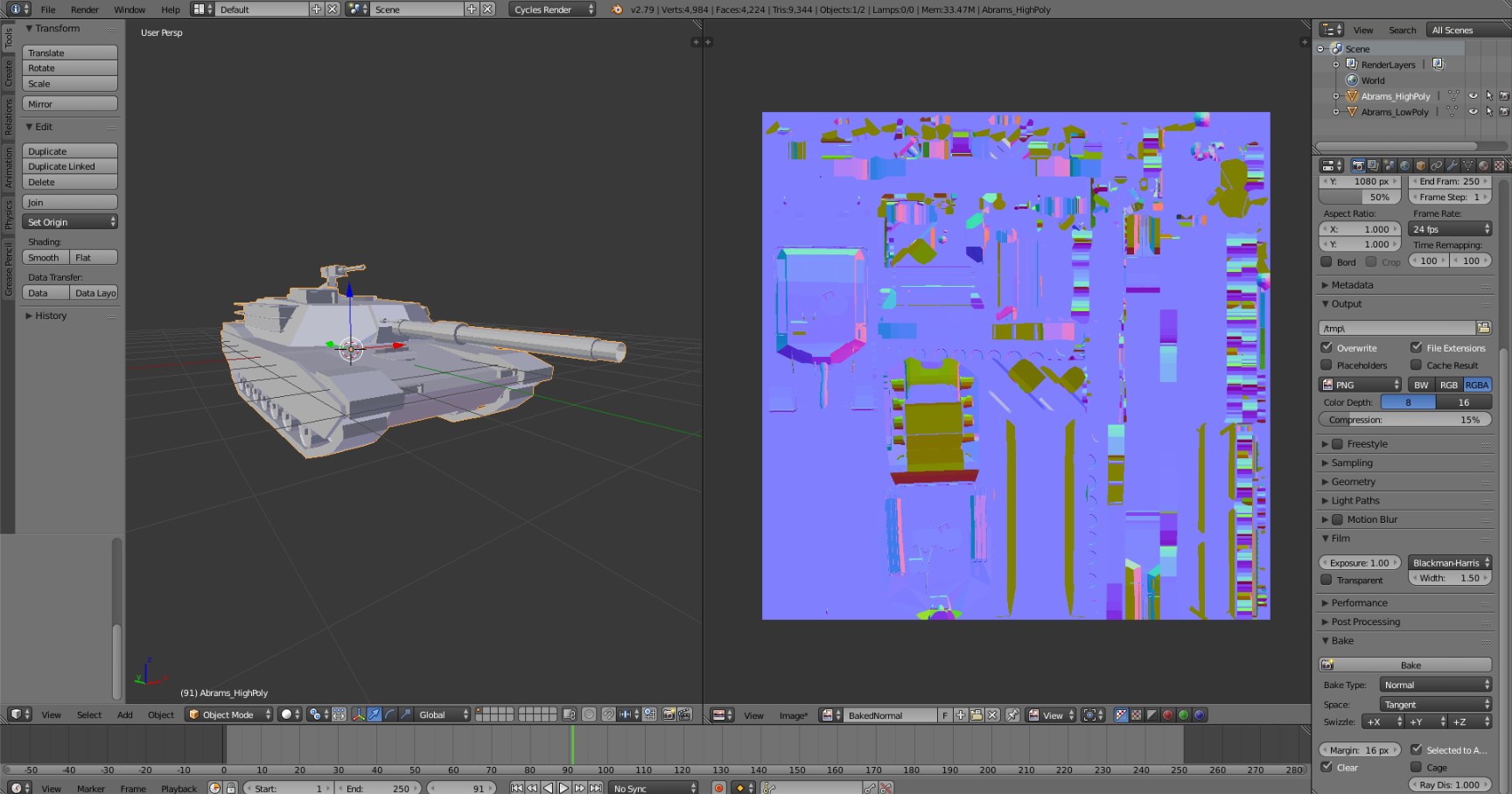 What do I expect:

I thought that the rays will find no difference (surface) at all because it is the same model, right? So the image should be blank. Instead I get a lot of stuff and artifacts on it.

If somebody can help me?

Have a nice day.

Your normals are inverted. Some of them are broken appart (they are not united) try going into edit mode and move them, you´ll see how they get appart and break from the original mesh. You got all traces needed since the normal map already tells you where this is happening. ALT+M will join vertex together (choose AT CENTER).

Another solution is to check out the normals. Definelty looks like the ones you have problems with are INVERTED NORMAL faces. Delete them from your model, recreate them in EDIT MODE and then select your object CTRL+N to average normals while in edit mode. Hope that fixes. It will certainly. Cheers.

@Pierre Schiller Thanks for your effort.

I don't think it is caused by inverted normals. I've checked the parts yellowed in the normal map. That would have been to easy. I spotted some vertexes which should be combined but it was not like a whole messed up topology. Some mistakes but fixed them quicky. Though it did not help sadly. Also I usually check faces when I build up a model anyway and use the remove doubles/ recalculate outside function a lot. Checked all faces and the outside is outside.

I think it has something to do with combining, could it? I mean I combined objects into one object and THEN I've tried to do normal map baking. Is this a problem? Since they have been one object but the mesh is basically not connected to each other. They are just treated as one object (CTRL+J in Object Mode). Also I checked the material. Everything is propertly assigned.

So far I think this answer of user50810 is the solution.

Thank you for your help and your time!

Not the answer you're looking for? Browse other questions tagged normals texture-baking baking normal-map artifacts or ask your own question.