My GPU makes a loud noise only when I use Eevee

I have a NVIDIA GeForce GTX 1080 Ti and just a few hours ago, while working, it started making a weird, pretty loud, sound. This happens while using eevee in rendered mode and navigating the viewport, but not in developer mode nor with Cycles.

I'm worried about my card, and I can't work like this.

The sound also does not appear while doing benchmarks or playing games, it seems to be connected to Eevee rendered mode only. Turning off certain things like bloom, bumps and so on changes nothing.

My guess is that you get to very high temperatures while working with EEVEE. This results in coolers working more intensely. I believe - I had a similar problem - one of the coolers might not be in a correct position. This way he touches parts of the plastic it is embedded in. What you could do yourself on your own risk: Grab an app that shows the temperature and the coolers (Like this one). Look if what I said above is true (Temperature goes up, cooling needs be turned up). You can even try the Powermax app from the link I posted. This tests your cpu/gpu coolers rpm at different loads. If you go to high load you know that my theory is true. Open the PC and take a look at the coolers. All the coolers, also cpu. Try to get the right cooler in its place. Do it carefully. Try different angles. Or take the pc to the closest shop. It's your call ;)

Hope it helped. Had a similar issue once.

The phenomenon is indeed most likely coil whine and it's not dangerous for your card.

Chokes consist of comparatively quite thick copper wires that are wrapped around a cylindrical or ring-shaped ferrite core. On very old motherboards they looked very similar to this: 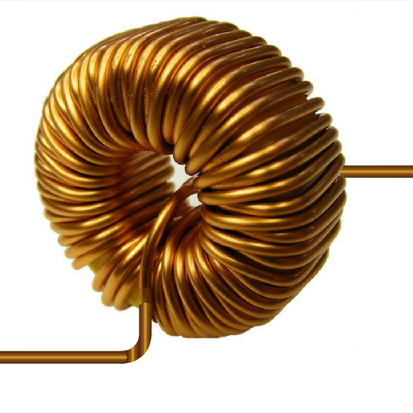 When the current passes the choke, the windings start to vibrate which may produce a high-pitched sound, quite similar to when you let a wine glass "sing" by rubbing your wet finger across its rim. These vibrations do not damage the chokes or the parts in their surroundings.

In "old times", when CRT monitors and (even more so) CRT TVs were still a thing, the sound was quite common, but people were so used to it that they noticed it only in the most extreme cases.

It's also no sign that your card is "broken" or "low quality". While it's true that some manufacturers produce cards that are more likely to suffer from this effect, the rest is just quality tolerance. One of my two R9 nano cards "whines" a little (only when using Eevee) while the other stays quiet under all circumstances.

While it's more or less annoying there is unfortunately no way to get rid of coil whine once and for all.

Not the answer you're looking for? Browse other questions tagged rendering gpu eevee-render-engine hardware or ask your own question.