I'd like to make an archimedes screw in blender.

I can't use a pre-built STL file, because I'd like to render it as a book/story illustration, so to avoid copyright kerfuffles, I need to do it my own self.

PS: remember, and archimedes screw is an auger, so; it exists inside of a bore, and I can do: the bore (a cylinder with an object modifier in the shape of an other cylinder cut out of the middle of it, then, another optional openning to open up one of its sides as though it were cut in half, by using another object modifier, this time: a cuboid, stretched and then placed halfway into and subtracted from it), then, the central drive shaft is obv just a cylinder, but then, the spiral which passes through that driveshaft at a near exact 60 degrees? That's the part that's got me stumped. I've done curved tubes in blender before, but, this challenge... ...thinking about it has me scratching my head, no offense.

So, I really just need help making a spiralling screw-cut surface endowed with the exact properties of an archimedes screw. I know there is a "screw" plugin, but I haven't played with it too much, so I don't know if that'll come into play, if it is a viable solution though: I'm all ears, thanks in advanced

You are free to edit the profile at any time, to adjust the result, before applying the modifier.

You're basically done. Trimming the ends for good topology varies from case to case, but if this is for illustration, (presumably you can retouch the image) you should probably get away with a Boolean to a cube.

The bore is a cap-less cylinder of radius (r + tiny), with a Solidify modifier directed to the outside.

This example has kept the vertex count as low as possible, and assigned a Subdivision Surface modifier at the end to smooth the result.

Not shure if i understand the problem correctly...

What about the screw modifier? 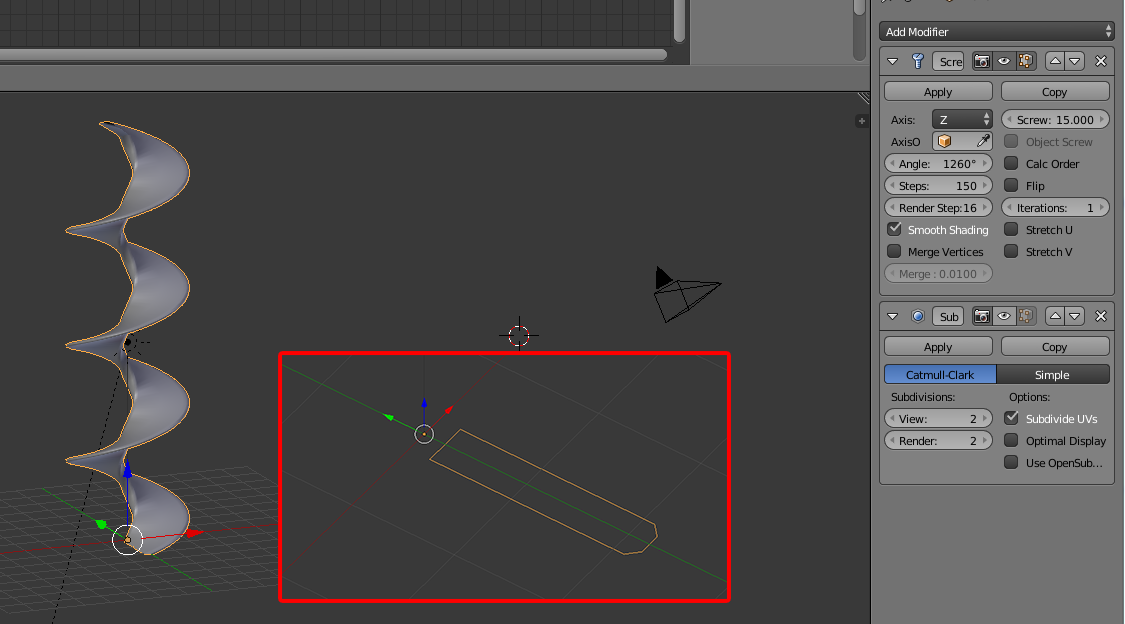 Not the answer you're looking for? Browse other questions tagged modeling screw-modifier or ask your own question.