Bmesh : how do I keep track of vertices in edited topology?

I'm trying to write a script to bisect Ngon rectangles, horizontally or vertically, at a given percentage of the distance along their sides. (The sides may consist of more than one edge).

Some of the script involves finding the right edges to cut, and moving the new vertices to the right place, but I hope this is a minimal expression of my problem:

The bmesh.ops.connect_verts(bm,verts = [v1,v2]) generates an error: '..BMVert has been removed..', which is perhaps understandable, but how would I keep track of v1,the vertex generated by the first cut? If I run this snippet without the connect, the vertices appear just fine in the updated mesh, so they are there, somewhere. 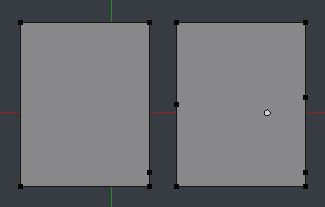 As mentioned in the comments could be done via

in one fell swoop.

When an operator creates new geometry there is a chance any old geom becomes invalid. However the data of the old will match the new, in which case can use the tag or select attribute to advantage.

Make sure to ignore the invalids with How to remove dead BMVerts from a list?

Test script. In edit mode to see what is going on.. Will work same in object mode

Note in 2.80 a mesh can be in edit mode in one view, object in another.

On a formatting side, in argument list, space after a comma, none around equals.

Not the answer you're looking for? Browse other questions tagged scripting bmesh or ask your own question.

4
Order of vertices added using Python script and bmesh
3
How to subdivide concave face into quads
2
How do I use bmesh on a set?
2
How to select extruded vertices in bmesh?
1
Get bmesh and list of vertices
1
merge vertices at center bmesh
1
Insert new vertices into face using pyhton & bmesh