Is there any way you can access the colour channels of image textures without having the alpha subtracted from them? There is both an alpha and colour output from image texture nodes but colour output uses it for transparency in cycles but not in lookdev (Eevee). This creates a discrepancy between the lookdev output and cycles render. This has mainly occurred as an issue when working with game textures that are using the alpha channel as another texture map and the other maps in RGB channels are then disrupted as it's using that channel for their transparency. I've tried pulling the colour channels individually and recombining them to no avail is there any way I can pull out just the raw colour channels?

I'm not sure whether this is considered a bug. However the behavior in Eevee seemed to me to be correct response as no functionality is lost as there is already an alpha output that can be mixed back with the colour channels if/ when it's actually needed. Alternatively having more output options on the image node would fix this issue.

With the Image texture node selected in the node editor, enable the Options panel (N) and turn off the Use Alpha radio button. Use a separate RGB node if you want to use individual channels. If you need the texture with alpha too, then add another Texture Image node and use it with alpha this time.

I hope that helps. 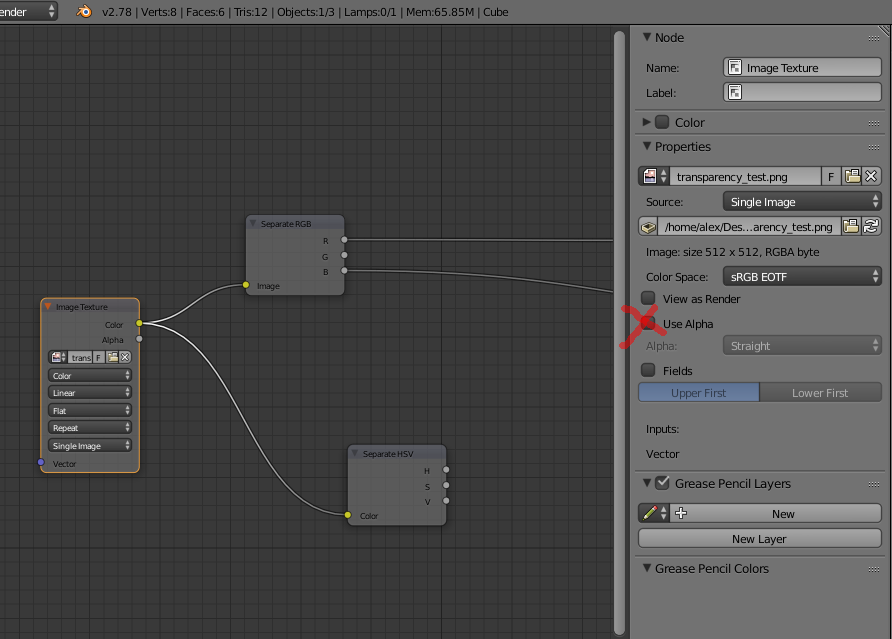 9
Animate alpha in Cycles nodes
3
How to separate texture-alpha without premultiplying the color?
2
How do I use the alpha channel of a texture for arbitrary data in Cycles?
2
Bake displacement to alpha channel washing out colour channels
2
Does Blender support texture with straight alpha
0
Adding image texture to procedural texture without colour alteration
0
Video editing: weird transparency blending with "Alpha Over"
0
Color into Alpha - Nodes and Vertex Paint
1
Change node settings and connections for mtl imports