I'm working on a material for redistribution, and my node setup uses a single black and white mask with different vector inputs to fake a normal map for a simple embossing/debossing effect.

The change in the vector input does two things: it takes care of the different positioning of the images, and a blur effect, both required for the normal map.

I'm aiming for ease of use, so I really don't want to make users manually update the image path of every single texture node when they use the material with their own maps.

An alternative solution would be to alter my methodology, but I also want to avoid forcing them to bake true normal maps to use the material because users won't be blender-savvy to know how go from an height map to a normal one. Using the mask for displacement is off the table, since it didn't yield good results with bump alone, and using adaptive subsurf on the model can be very demanding of the users' computers. The effect isn't worth the processing cost.

I found a similar question with an interesting solution, which unfortunately doesn't help me at all because it's generates an this image OR that image output. I need an AND output, something that enables me to have all images outputs simultaneously in the same mesh.

The obvious solution for me would be drivers copying the image path from somewhere else, but no luck there. Then I tried to find a way to modify the mapping after the image texture running it through a third node containing vector and image inputs, but nothing as well.

I may have just invalidated the rest of my answer as I realised you can just edit the Source property of an image from the Node Editor's Properties Shelf (N) when you have an image node selected, which will update all image nodes that share that image:

This is because when you duplicate an image node the image is instanced (shared). When you edit the Source property you are editing a property on an existing image, so the other nodes that use that instanced image see the changes. When you normally browse to a new image you break the connection to the other intances so they don't update.

So, you can inform users that changing the Source property in the Properties Shelf on one image will update all the relevant images, or you can look at my original answer, below, for other solutions.

My suggestion would be to group the Image node within a group, with the Vector as input and the Color and Alpha of the image as output:

Whenever you need to use the same image you add the node group instead: 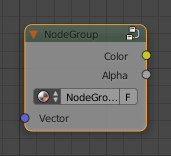 Obviously, this still doesn't usefully expose the image path to the user, but at least they only have to change the one image (because all other image groups will also update).

You could even place an additional one of these group nodes in a more accessible place in your node tree with instructions that this is where you can change the image (instead of the user having to dig through a particularly complex node tree): 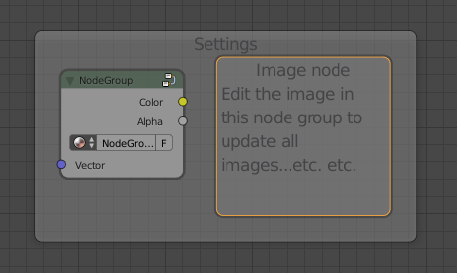 (The description comes from a text file, so this may or may not be suitable for your situation).

An alternative solution is to provide a small script along with your material that has an interface for providing a new path which then updates the node's filepaths.

This changes the filepath for the image on the MyMaterial material.

If you have questions about how to provide an interface for selecting a file and returning a filepath to your script you can either ask a new question (or search this site for Existing Questions).

Not the answer you're looking for? Browse other questions tagged cycles-render-engine materials node-editor image vector-mapping or ask your own question.

0
Multiple instances of a single image node, each with a different vector input

4
Rotating a single image texture for multiple instances
2
Use alpha of one texture node to mask another texture node
1
Share custom compositor nodes among blend files
0
Getting a normal map to work in a multiple uv node setup
4
Cycles material node set-up for diffuse, specular, reflection/refraction, normal and illumination/emission map
1
Mixing image texture makes everything transparent
4
Vector math to get Curve object silhouette
0
How to specify a different value for a node parameter, part of a node group, for different materials