How to use random proportional editing?

https://ibb.co/fvjwCjf I'd like to have the orange line randomly peaking downwards. In this case, it only made the faces above it random. I'd also appreciate some further tips on (random) edge editing. 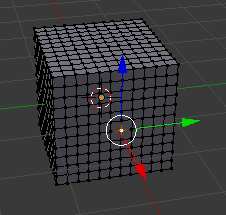 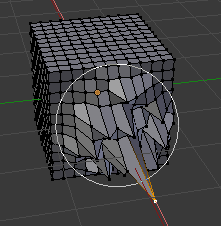 The default cube is subdivided and I selected a single vertex. Then with the Proportional editing set to random Grabbed and translated on the X axis. Note which vertices are affected. 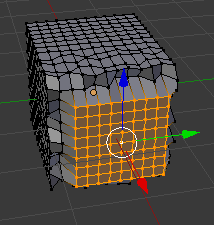 Then I selected more vertices and repeated the process. Note which vertices are affected now.

I also tried it on a Mesh Circle and the same results occured. I did have to make the circle of influence very very big to affect all the unselected vertices in the circle.

In the video you cannot see the circle of influence, I am guessing it is so big it is off the edge of his viewport.

The way proportional editing works in Blender is:

Because you have selected all the vertices, they are all 100% influenced by your GZ

Select 1 vertex: it will move by the whole of the requested transform, and all other vertices within the Prop. Edit radius will be in the area of falloff, and, in your case, move by a random extent, according to a randomly varying falloff 'curve'.

Personally I much prefer the system adopted by 3DS and others, where you can make and edit soft selections, and then do whatever you want to them, proportionately to the selection weights.

0
Get usual right side toolbar in UV Editing mode
0
Strange mesh behavior with proportional edit
0
trying to make a wavy edge
2
How to maintain right angles while editing a rotated mesh?
1
Can I apply something like a mask to apply proportional editing to only some connected vertices in blender 2.8?
0
what would be the equivalent tool to this in blender
0
Problem with editing mesh - not closed?