[SEE Edit #7 at the bottom for official, final question]

I know its possible to take a screenshot with python of a particular window (take screenshots programmatically in bge?), but is there a better way to get an image (in base64 format) of exactly whats displayed in the 3D view (so I can send it to a websocket)?

If not, how can I at least get a screenshot in a better-resolution? Like how do I open a full-screen (or more) 3D view window in the background so I can get a 1920-1080 screenshot of the camera? (or at least the whole 3D view and I can crop the camera window later)

BTW I kind of just learned about handlers which are very useful, here's my current code (based on the link from batFinger):

and it's actually very cool the way it works, however its still not REAL time (try testing it and playing, it lags a bit), but that's only because bpy.ops.screen.screenshot takes some time to save the file, but if I would theoretically just get the base64 data of the file without saving it, it might be a lot faster, and I can send that to a websocket possibly and save it using that.... so:

How can I just get a base64 data string of the screenshot image without saving it? I image it has something to do with the source code of bpy.ops.screen.screenshot, although I have no idea how to edit that (I'm willing to make my own build of blender if necessary, but I'm just wondering how to even access the source of that function)

EDIT 3: actually I think I'm on to something using only native python, this: https://docs.blender.org/api/blender2.8/gpu.html?highlight=gpu#module-gpu is the instruction to at least DRAW the 3D camera view as an image, try running this:

NOW I just have to figure out how to get the data for this in a string that can be sent to a socket server.... if anyone knows/ can give insight on how to do this, that would be cool

OK so I think I'm getting at least somewhere, I'm now able to, in (pretty much) real time export PNG images (and / or get the data URI / bytes for easy socket communication) WITH an alpha background, without any toolbars or anything interfering! There's only a few glitches, but here's the code for maybe someone to test it out and help (the only dependancy is installing PiL in blender which I used with these powershell commands: .\python -m ensurepip --default-pip, .\python -m pip install Pillow, after being in the\2.80\python\bin directory):

and also BTW if you want it to go in real time about > 30 FPS than you'd have to make your own build of blender following this answer: bgl.Buffer() to bytes.

So if you've tested it out with a small, try about 150 frame animation with an animated camera, you should see that the images are a little distorted at times, like this: 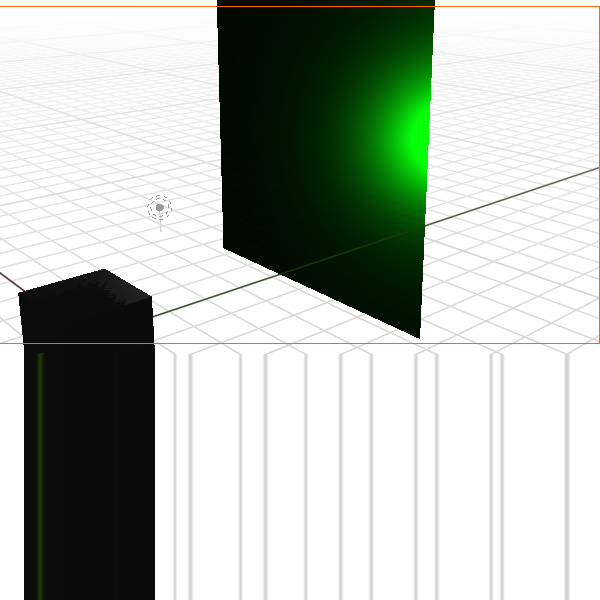 I have a feeling its something to do with not clearing the bgl before drawing another picture or something like that; however, I'm not too versed in openGL in general so it might be some other problem, and if someone else knows about it that would be great. As I just noticed, the smearing takes place outside of the camera outline so its probably jsut anything outside of the camera view becomes smeared, so IDK if theres an easy way to fit the picture to the camera view always, no matter what size (or at least keep the camera box in the middle of the picture if the aspect ratio isn't the same as the camera) Also I'm not sure how to properly change the image size to be, lets say, 1920 by 1080 and still fit in the camera, try changing the WIDTH and HEIGHT around and you should see that the result isn't as expected: 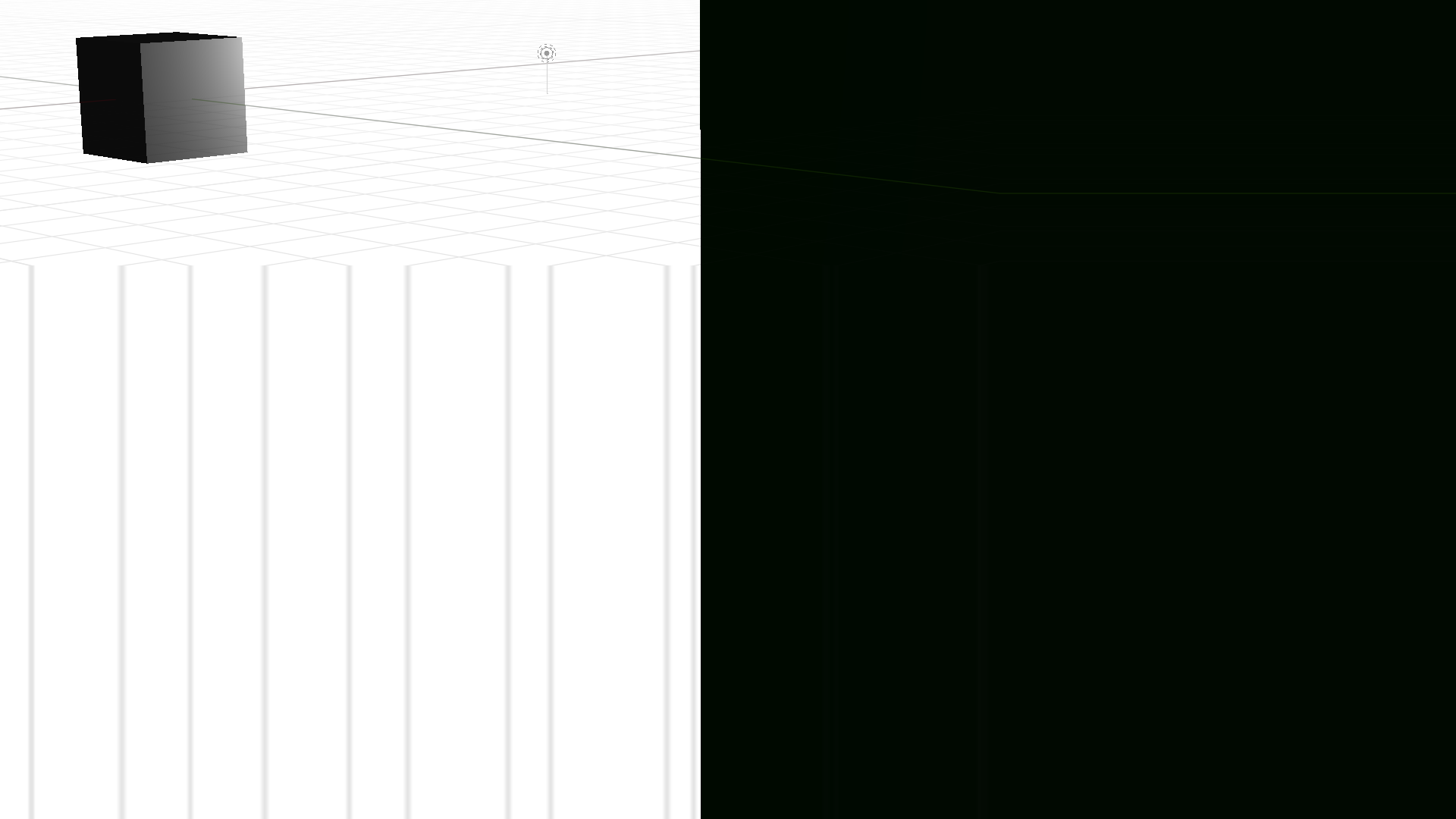 besides the fact that its very offset from the actual camera position (were you to actually render it), it seems like the entire bottom part is smeared down for probably the same reason as above, but I just don't know how to fix it, and its also much lower quality if you zoom in at 1920 by 1080, but I want to find a way to keep it the best possible quality somehow (its definitely possible).

So its pretty much able to work with a very low quality picture, but how can I safely increase the resolution and keep the picture in the camera view?

Also I'm trying to implement threads, by doing this at the end of the draw2() function instead of above:

and then later I define saveIt:

I'm mainly doing this to output the images faster, and it kind of almost works, although when I simply play the timeline, some images are being skipped, as can be seen in this screenshot: 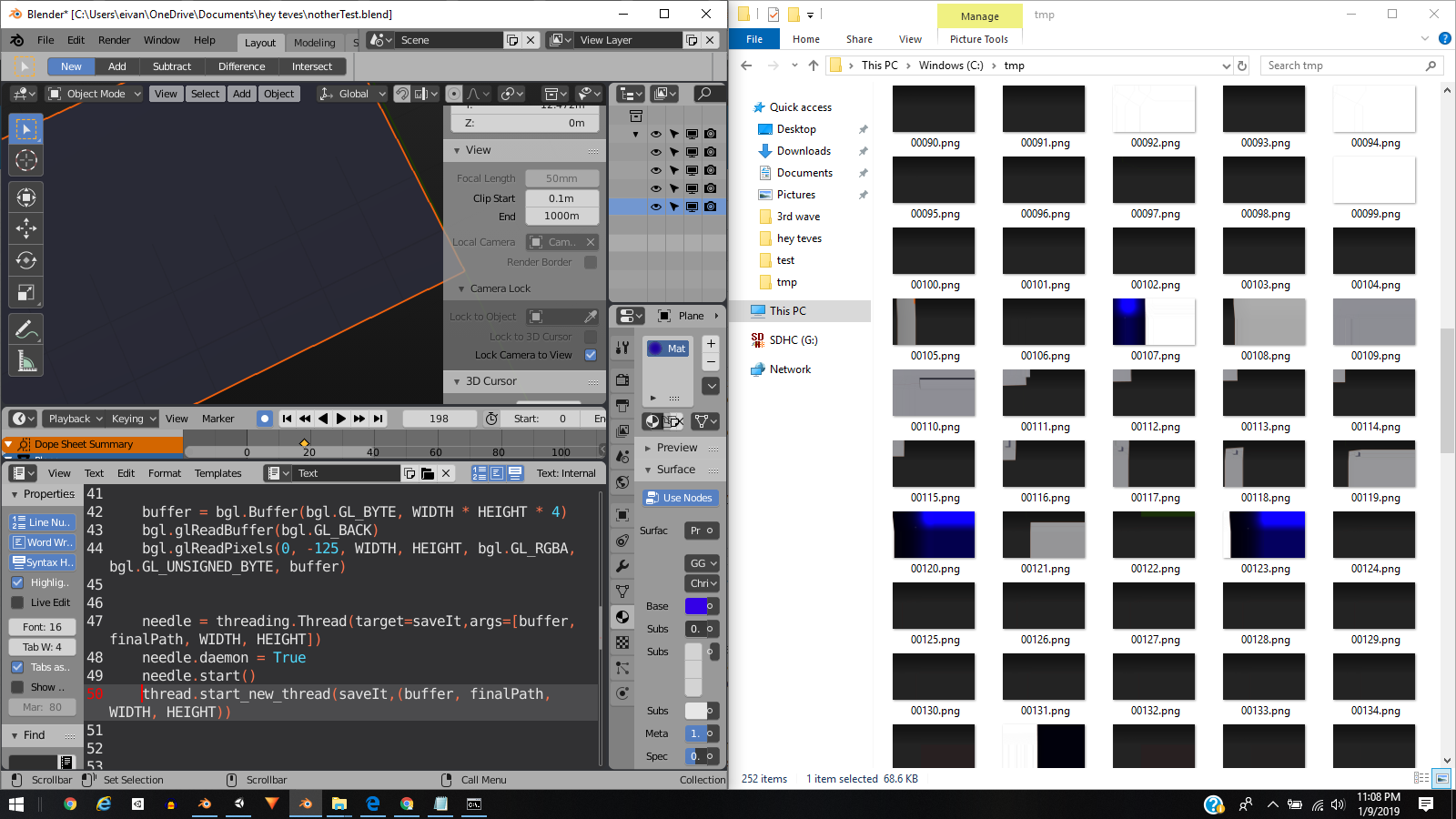 (BTW the last line in the code in the screenshot was commented out and it doesn't work in blenders python I'm pretty sure, I get a compiling error but I'm not sure if that old python method would be better than the one I'm using...)

EDIT 6 I think the camera smearing problem is because, first of all, the image is inverted, so I think that needs to be fixed somehow... also, I realized that the smeared part is from when the other blender windows overlap it, so that itself is a problem: How can I simple open up a new blender window with the display of the offscreen render, and simply bgl.glReadPixels off of that? And mainly: I still can't figure out how to get good resolution with higher widths and heights for the offscreen render, when I increase it its just pixelated, how can I fix this? If I need to modify the C++ / C code, then so be it.

EDIT 7 OK I almost have this figured out actually, I still haven't been able to get the different quality / image smearing with the camera fixed, but I did fix the thread issue above, where the images weren't saving right, I was just passing the global path variable (which changes on every frame callback) instead of the local "path" variable that was passed to the thread, my new saveIt funciton is this (I originally used queues while experimenting, and it works either way for me):

As I mentioned in comment I have been recently using the gtk3 toolkit for taking screenshots of open windows to include some window manager like functionality in blender to choose other open windows (blender, matplotlib, or vim or consoles etc) directly from within blender without falling back to desktop window manager.

Here is a simple test script. It places a screenshot of fullscreen, each open window, and active window into the folder in which blender was opened from.

You may be able to set the geometry of a window to larger than screen resolution, haven't tested.

A crop from "active.png" the window was active when I chose to run the script

This simple example only uses Gdk.pixbuff_get_from_window(...) There are other methods using the toolkit, checkout cairo for example.

Not the answer you're looking for? Browse other questions tagged python 3d-view or ask your own question.

4
Blender 2.8 EEVEE render out viewport like old openGL render
3
bgl.Buffer() to bytes
4
take screenshots programmatically in bge?
2
Create a screencast with exactly one image per animation frame
2
Blender 2.8: How to output renderings in real time just like what is shown in the viewport?
3
What is the fastest way to get pixel data out of the camera?
2
How to get to work with the image of the camera with python
1
Fast streaming camera view to video for linux (v4l) system device
1
Get raw pixel data from a camera, into the python script

1
Multiple meshes per object
2
Chose file format when taking a screenshot with python
5
How to convert image pixel values from 8bit to 32bit properly?
0
Is it possible in blender to change the dimensions of a downloaded 3d model in .blend format or .obj format in blender using python scripting?
2
Automate the rotation of camera around an object with python
1
Fast streaming camera view to video for linux (v4l) system device
0
How to constraint object to perspective user viewport (Not render camera)