How to edit UI icons?

Blender 2.8 comes with a set of monochromatic icons which seem to be stored inside datafiles/icons/*.dat.

How can these icon files be edited/replaced with other/custom icons? Where is documentation about the icon format and how to compile/generate these *.dat files? 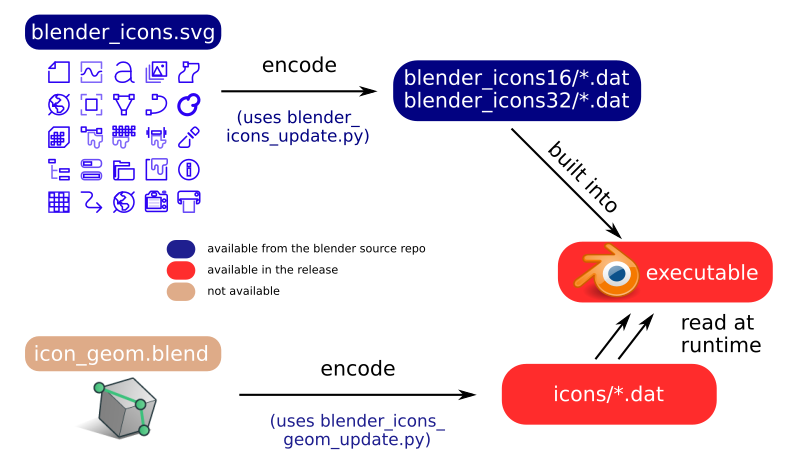 Not official: based on own research. Edit: NOTE: icon_geom.blend being "not available" was accurate at the time of posting, but has later changed. Now that file is available on a separate repo (see below)

I think that "the monochromatic icons", the small ones used in menus etc, are not present as separate files in the compiled releases of Blender because they are compiled in the binary code. By the way, they are not necessarily monochromatic: this isn't "forced" in the code, it's just a design choice made for version 2.80.

The ones that you find under datafiles/icons/*.dat, that come with the built releases, are the (usually colored) ones that are used, for instance, in the tool shelf (see pic below)

So which ones do you want to change?

To change the small "menu" icons 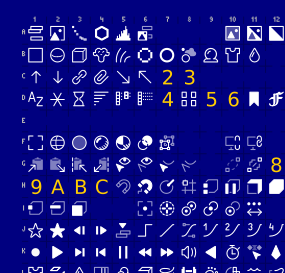 and then update and make the icons, roughly following this guide (a bit old but I think still valid)

To change the bigger "tool" icons

I'm not sure how to change the (usually) colored ones that are not compiled into Blender (i.e. the ones that are present as separate .dat files in the downloaded blender builds). They seem to be generated via this blender_icons_geom_update.py script that pulls the design from a icon_geom.blend file that is present in Blender's Library Resources SVN repository.

I've found this message that confirms that the process is currently not documented:

«Currently, it’s just a .blend file that generates the icons.

[...] Once we are more finished with the tools we will probably document how people can do this, if anyone wants to make new icons, or change them.»

There is anyway another script: blender_icons_geom.py that contains a documentation of the pixmap format which could be what you are looking for:

To answer your question I have just made a short investigation across the repositories and forums, but I have never tried myself to edit these icons.

One thing is for sure: if you do something like

the "bevel" tool actually becomes a little pencil (this proves that the "tool" icons are read directly from the datafiles/icon folder).

Not the answer you're looking for? Browse other questions tagged theme development or ask your own question.

0
how to edit blenders UI icons?
8
How can I recolor Blender icons in outliner?
2
On Screen Display Xray mode

7
How to change highlight color for icons in outliner panel
6
Is it possible to change the width of edges in edit mode?
0
How do you make this theme?
1
How can I change theme for background color?
2
Blender Python: setter not working
2
Blender Python: Declare Property Group (on the stack?)
1
Icon colors are difficult to see
0
How to set a different theme for Edit Mode?