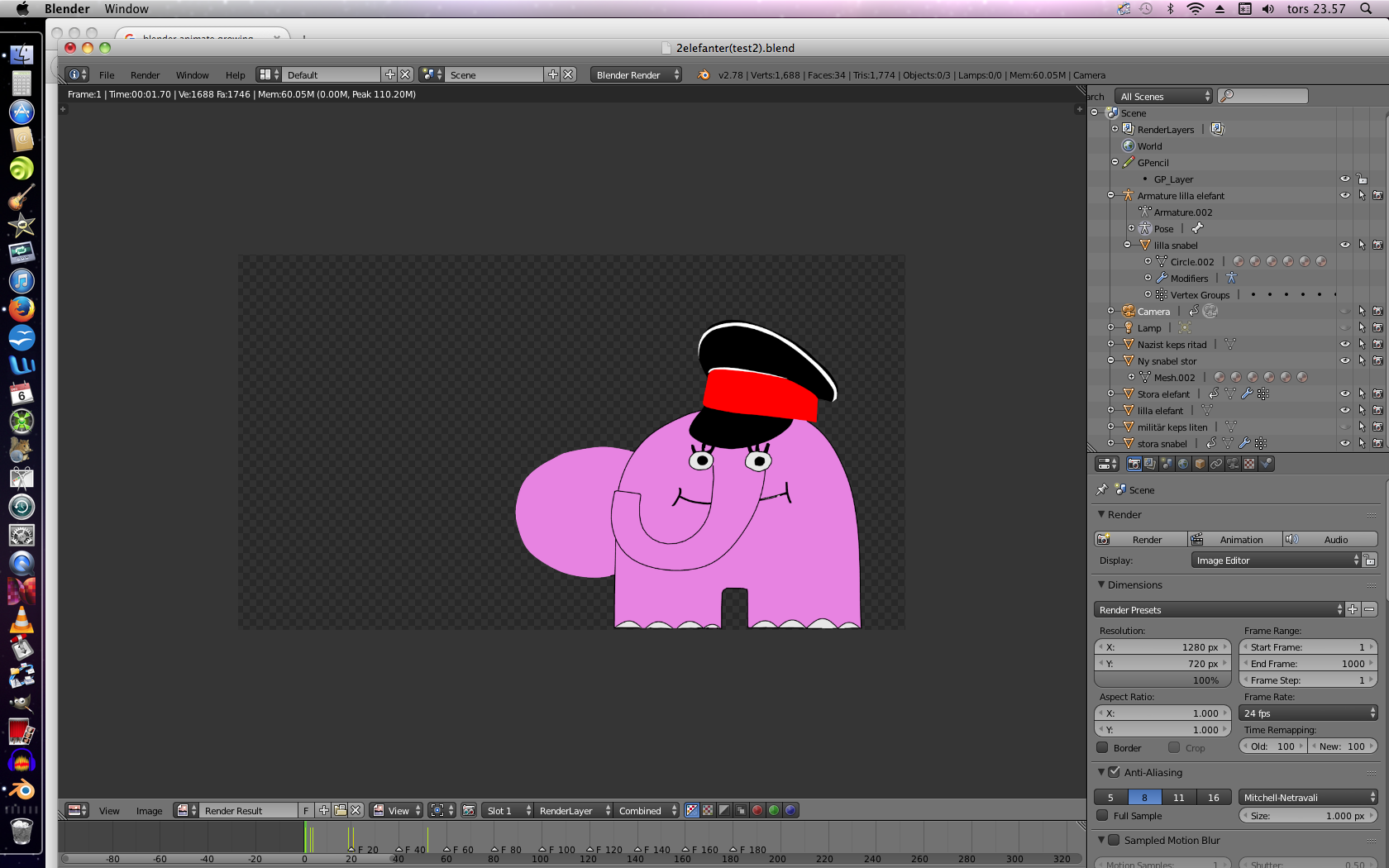 I have a rather simple 2D model of an elephant. However I want the trunk to behave in very specific way. As it honks, I want the trunk to bend upwards, but then in the second half of the animation kind of transform into a "pipe-structure" as the the very tip evolves into a horn (as seen in the picture I'm attaching). Can this be done by a relative newbie such as myself? 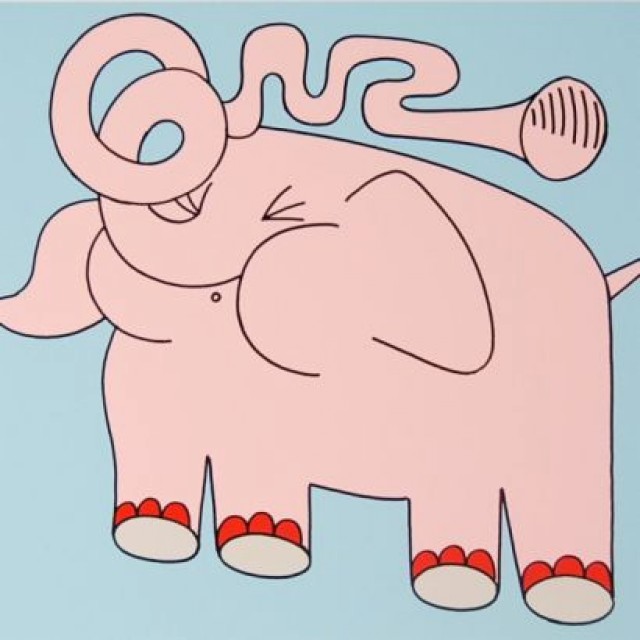 The trunk is a curve (path), shaped as a comical elephant's trunk and held skyward so it's upper end is also pointed forward.

The curve is "bevelled" with a curve-circle to make a cylinder curved upwards and pointing forward.

The resulting cylinder is converted to mesh. It's side edges only are subdivided 63 times so we have plenty of vertices for it's curvature to be animated smoothly.

The "Cast" modifier is used on this in order to expand and 'trumpet' the end. This is achieved by placing the "cast object" near the upper end and keyframing it's location so it oscillates. (approaches and leaves the cylinder's end rapidly)

The cast modifier's effect is to expand and retract the end much like a flexible trumpet.

The Empty's oscillitions are just 2 frames apart. i.e. approach for two 2 frames, recede for 2 and so on for as long as required.

Instead of using a circle for the bevel object, use instead, a plane (converted to a curve with ALT-C)

This will give us a square trunk.

Once squared, the bevel plane can have it's two lower control points deleted so the trunk ends up as a flat 2D curved object. 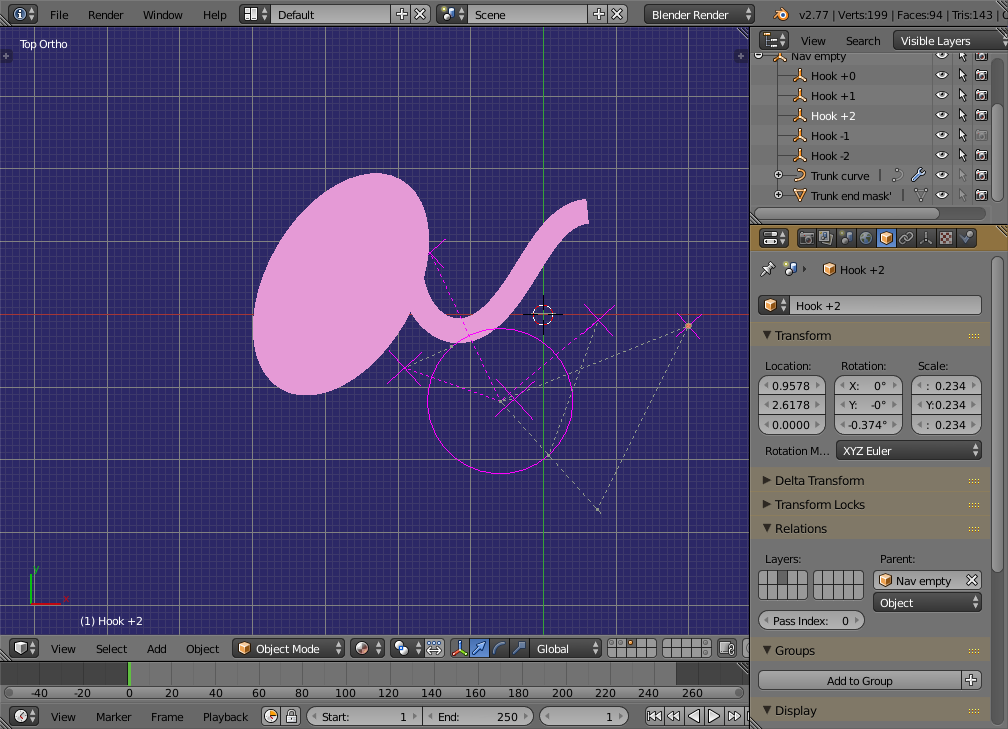 We keep the trunk as a curve object so it's control points when moved about with either shapekeys or "hooks", won't lose the biological curvature as it's reshaped. Bones and rigging can also do this.

That looks very challenging. I think it would be too laborious to rig that trunk. Too difficult too. Think of stretching and curling it round.

If this were my project, I would have tried Inkscape and exported finished file to image sequence which can be imported into Blender.

To work fast with the LEAST possible nodes (different meaning in Inkscape) inside the outlines, I would first ditch the pencil and use instead the bezier or b-spline. My way, I always draw cartoony figures with exclusively a bezier and bspline. Pencil only creates numerous nodes and I don't want that when I re-edit lines in duplicate layers. That trunk can be easily and quickly drawn with a bezier. If you dublicate layers for each subsequent drawing, you re-edit lines, thus saving you labour by half when you do inbetweening.

Inkscape has one hidden gem that is oftentimes overlooked and forgotten, namely the interpolation tool that all inbetweeners love. With that labour-saving tool, you can create any number of morphed drawings between any two shapes. For best results, clone one key shape of trunk and re-edit lines in the clones and then use the interpolation tool on keys. Remember, clones share originals' identical node IDs inside paths. So, this makes the interpolaton between the originals and re-edited clones so much easier. After that, separate drawings for new layers. After that, export files to png.

Not the answer you're looking for? Browse other questions tagged animation modifiers transforms 2d or ask your own question.