Bending a mesh along spline which it's also following,not working

I have some sleepless nights because of this and now I really have to ask you this =) I’m working with Blender 2.80 Beta and maybe it’s also a slight Blender bug as I have seen others achieving this the way I wanted to achieve this (with the first mentioned solution of mine).

I used a long cylinder mesh with quite enough subdivision, (location: 0,0,0), rotated it to be the same direction as my path curves start and applied rotation/scale/etc (also to the spline itself), set the origins to the front of my worm mesh and the origin of the path curve to where the start is, parented the mesh to the spline and added a follow-path constraint (this part is all working and it’s following the path exactly), then I added the Curve modifier to the cylinder but this one offsets the mesh to somewhere else and it also doesn’t seem to follow the path in it’s offset location (I mean I could live with an offset). When having a circular path, it doesn’t go in a circle, it moves around in an “8”. The body bends sometimes but this bending isn’t looking at all as it should^^ I tried using a short cylinder mesh and add an array modifier to it, but have the same exact problem. tried other modifiers which all don't give the result i need.

Do I really have to rig it or is there an error in what I'm doing?

Here's an image (as requested, thank you!) of the project: 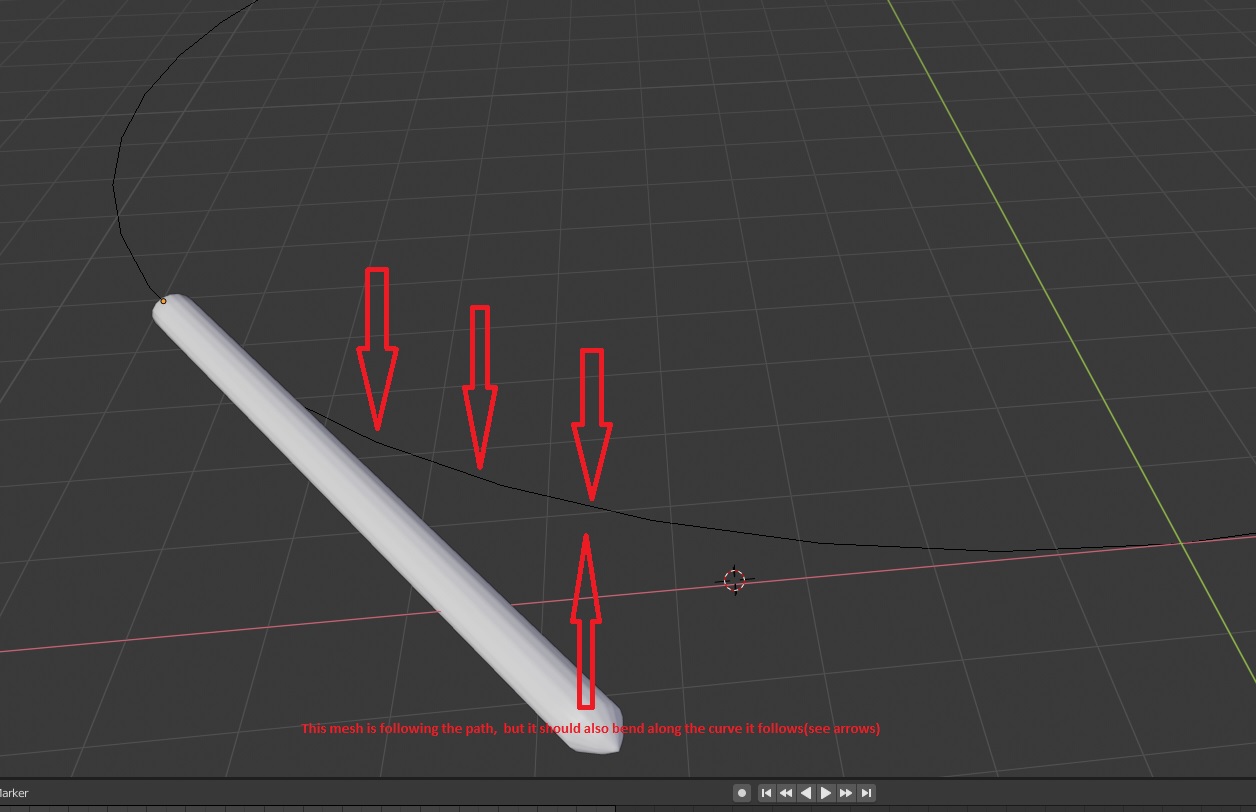 Thanks everyone for reading :)

All the best, Oli

edit: I had a subsurf modifier in place (above the curve modifier), then I applied it and it's the exact same thing happening. the first image looks as if everything's going to work fine, it also bends along the curve, but as soon as i press play, the mesh goes up in the air and deforms quite strangely. I uploaded the simple project: dropbox.com/s/ypwgabfig436krc/SpaceWorm.zip?dl=0 Thanks a lot!!

What is strange is that for following the path I parent it to the curve with option "follow path" and then to be able to add the follow path constraint I have to first un-parent it again and then add the constraint. Otherwise it never follows the path. maybe it's got to do something with this, not sure

Even though the offset and bending of the object behave not correct,it's a little bit better in blender 2.79 but also not as expected..

Second "video" shows with parenting (follow path) and w/o constraint:

Last one representing the total fail when using a more complex path, on the right side you can see the curves settings, went over quite everything, nothing works:

I don't know if this will work for what you finally want, but for what you described, I would simply use the curve modifier and then animate moving the object along the X axis. Here's what I did

This will move the cylinder to the starting point of the Bezier curve. Key frame it here.

Move the time to whatever is appropriate, move the cylinder along the x axis, and keyframe.

6
How to get a flexible tube to follow a curved path?
0
How to convert follow path to object
7
How do I make a curve in the shape of a simple wave form (sine)?
1
follow path not working correct way
2
How to properly make an object to follow a path?
3
Follow path not align on the path
0
How to sequence paths?