How can I apply a twist incrementally along a curve?

I have been working on creating knotwork in blender - with the ultimate goal being to create a 3D print that I'll use to make jewellery out of. So far the process I've been using is to design the curve for the knotwork and the bevel shape in inkscape (since it's curve tools are more sophisticated than what I've found in blender so far), importing both into blender, and then move the curve into the right spot, sometimes apply some modifiers to it, and then use the bevel feature on the curve to make the knotwork.

Overall this works pretty well - but if I need to go back into Inkscape to adjust the curve, it's a lot of work to re-apply all of the changes in blender. I'd really like to be able to just copy the path/points from the new curve into the old one - and have the transform, modifiers etc. all applied to it automatically. Is there a way to do that?

At the top of the curve properties panel, there's a drop-down that shows other paths that exist (where it says path871.002 in the picture below) - but it doesn't seem to be modifiable - if I could just change that to use the path from the newly imported curve, I think it would do what I need. 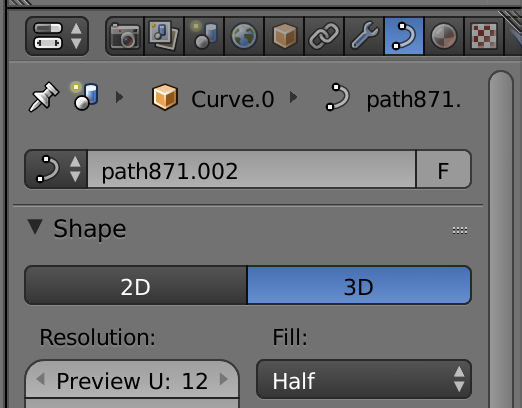 Is there any way to do this? Thanks in advance!

Browse other questions tagged bezier-curves or ask your own question.