How do I resume a rendering animation?

I've stopped my animation that was rendering at 224 frames (out of 250) and I can't find a way to start rendering again from where i left off. I've been told to change the start frame (under frame range) to where I last left off but it just starts the render from the beginning (restricted to 224-225 frames). Please help, I just need a few more frames 😭

Another reason is that sometimes there's just a single frame that's wrong and you can easily re-render it or just retouch it in Gimp.

But, more relevant to this question: Blender has a nifty feature which only works with rendered image sequences. It's called 'Overwrite' 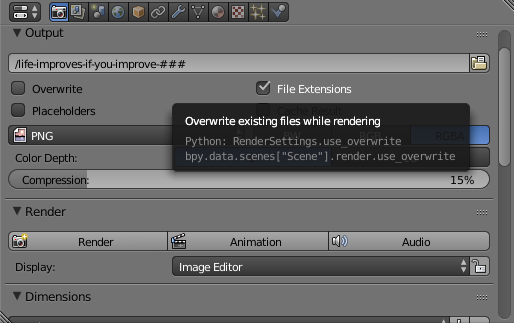 If this checkbox is empty, Blender will ignore frames that are already rendered. Which simply means: if Blender finds a rendered frame, it just renders the next. Blender won't check whether you changed a color and there might be a corrupted frame if rendering was aborted in a violent way but other than that it's quite handy to solve your trouble.

Combined with placeholders, you can even set up a rudimentary render farm.

What you've been told is correct. You'll need to adjust this number:

Then you'll need to stitch the two clips together in a video editor.

0
How to set the frame range for rendering?

2
Why does the frame range setting behave differently when using multiple scenes in the Video Sequence Editor?
1
Rendered animation is incomplete
3
How to resume a render that got interrupted?
0
Blender acting weird and crashing when GPU-rendering
0
is there a way to lock everything so settings won't get changed between rendering sessions?