I'm trying to to create a compound shape pretty much in the same way I did in my C++ code.

How can it be done in blender?

AFAIK, the option in Properties view panel>Physics tab>CollisionBounds disclosure triangle>Compound has to be enabled for the three bodies, and one of them needs to be the parent, while the other two are its children.

This works pretty well, but I need to add some offset to the parent too, as the picture shows, how can it be done?

Using a fourth empty body as a parent would introduce an additional shape, that would mess the hole thing. 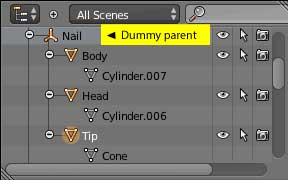 Is there a way to add an additional transformation to the physics shape attached to a mesh?

Instead of directly messing with the Physics parameters, this situation is way easier to handle with ordinary mesh tools.

You can merge your three objects by using the Boolean modifier. First, select only one of your objects, then go to the Properties>Modifiers menu and select the Boolean modifier. In the modifier options, for 'Operation' select 'Union' and for 'Object', select one of your other objects. If you then hit 'Apply', your first object will now have the overall shape of those two objects merged.

If you have three objects, you'll need to do this twice (because the Boolean modifier only operates on two at a time).

Also note that the modifier will leave the original copies of the objects in addition to the new, merged version, so at the end, make sure to delete the original objects.

Then, in the Physics panel, select 'Mesh' as your collision bounds.

Not the answer you're looking for? Browse other questions tagged modeling game-engine physics or ask your own question.

18
Tips for making Mesh Rigid-body collision shapes more stable
2
How to simulate deformed metal
1
Compound rigid body in cycles
3
How to represent Box2D joints
4
Building corners: How to connect 2 walls with a straight corner
0
Trying to get solid physics working coherently
2
How do to use just edges as Compound Parent?
0
Rigid Body Unbalanced Weights