Animation Nodes: How to snow in the text?

I have two examples below and I wish to make text drop in like snowflakes. How do I do that with Animation Nodes? This is for future projects with motion graphics. Any assistance is greatly appreciated. Thanks in advance.

In second example below, how do I make random letters drop, again with Animation Nodes.

Starting from the position of each of the characters, create a random walk biased in the direction of the positive y axis. The random walk is easily done using a loop as described in the documentation. The path of the walk for the first character is shown below: 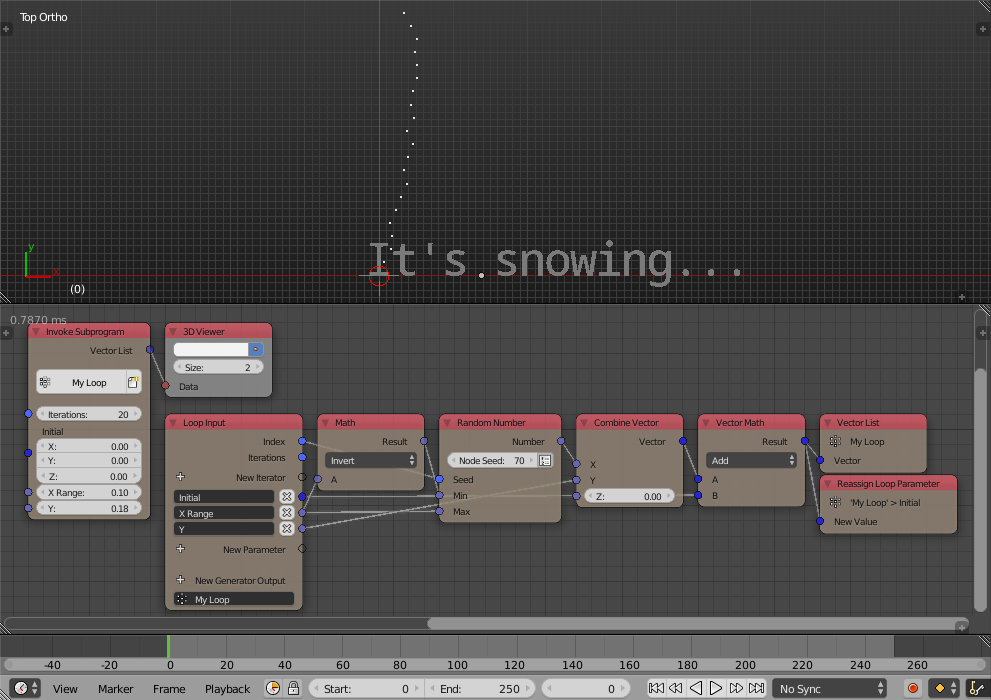 We are going to edit this slightly such that the first random step has no x component so that the tangent to the path at this step is pointing along the y axis, this will ensure the character will be upright when it reaches this point if we orient it based on the tangent. This is done by multiply by zero if it is the first step, that is, if the index is equal to zero. We will also add a Seed Offset, which is just an integer that is added to the seed to differentiate between different splines:

Then, we are going to loop over the character positions, use their positions as the initial point of the random walk, and their index multiplied by the resolution of the spline as their offset seed. The outputs of the random walk is used to generate a spline which is then evaluated based on some parameter iterator:

Finally, we generate the parameters using an inverse delay falloff and orient and position the the characters based on the output positions and tangents:

To achieved the second effect, simply shuffle the parameters list and maybe reduce the delay: