I have a movie clip that pans from left to right. I've added a motion tracker to an element in the scene that is stationary. But when I apply stabilization the camera panning motion is lost. The autoscale function also crops most of the scene away. It's as if Blender thinks the panning is an error that needs smoothing out.

How can I allow for camera movement while smoothing out only small bumps and jitters?

Here's how the stabilzation's supposed to work in Blender:

The trackers included in the 2D Stabilzation tab get pinned down. The image then gets repositioned to keep those tracked points in the same place, effectively countering whatever move you had made. Blender has no way to discern which movement is intentional and which isn't...

A workaround for stationary shots with panning (or tilting) is recreating the move after you have stablized the shot.

To do that you need first to unclick the 'Autoscale' button in the Movie Clip Editor. The repositioning of the clip is done on the compositor adding a 'Translate' or 'Transform' node. Note that you will need to rescale the image a bit.

In the Compositor add a 'Movie Clip' node with with the original video footage (or image sequence) and you plug it to a 'Stablize 2D' node.

On the 'Stablize 2D' node select the tracked Movie clip as source, so Blender can use the tracker information associated to the clip. The output of this node will be the stabilzed image.

Add a 'Transform' Node, and that's where you'll recreate your camera move.

On the Timeline go to the first frame of the clip.

You might need to play with the interpolation curves, or add a couple more key frames. If your image doesn't fill the frame correctly, showing the edges of the original image, then make changes on the scale. After some trial and error you should have a nice panning shot with no jitter. 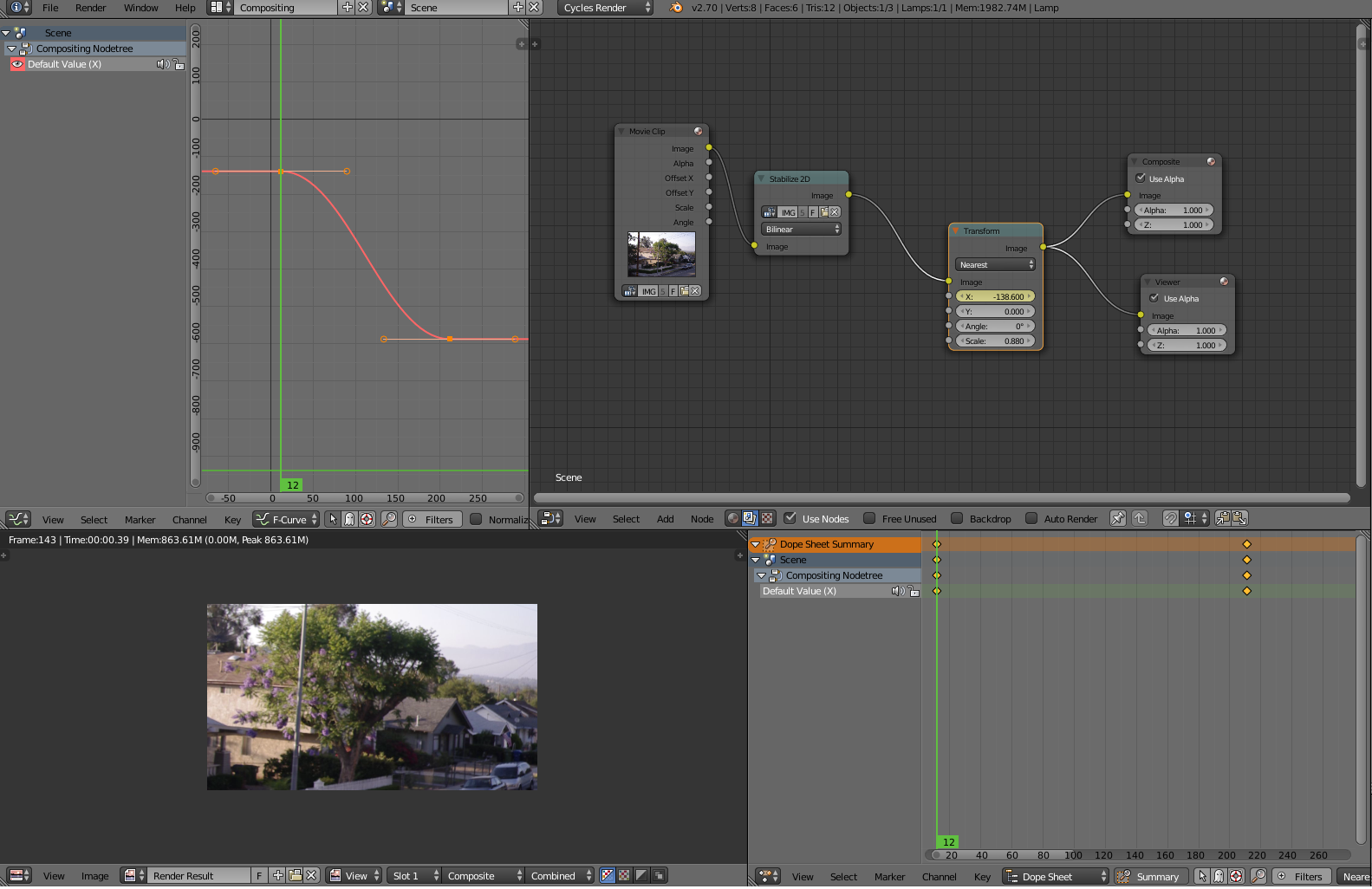 Wouldn't it be easier to use a python script (a plugin?) to modify the x,y displacement information (equal to the 2D correction) that the "stabilize 2D" block inside the node Editor is using for the correction?

Additionally I see that in the Motion Tracking View the "Movie Clip Editor" panel shows a representation of x,y over time. In this panel there is a filtering window that seems to do that but I am not sure how to use it.

Maybe a python plugin could take x,y and substract a (first or second order) polynomial interpolation of x,y. In this way the image is only corrected of the value (x,y)-interpolation. This would leave panning over x and y axis untouched.

Things become a little more complicated when two or more markers are used for image stabilization.... also rotation could take advantage of the same implementation.

Well I hope some Blender expert could add a comment on this. I would be willing to try to implement the python script.

EDIT. at this link: http://sonneo.blogspot.com.es/2014/08/better-video-stabilization-in-blender.html#comment-form

You can find the implementation of a high pass filter for the marker speed. It works great but I wonder if it is really optimal.

3
Can motion tracking and Video Stabilization constrain to y axis only?
4
How to 2D-stabilize and enlarge canvas to preserve outside pixels?

4
What should I track for accurate rotation stabilization? Or, how can I stabilize motion timelapse?
4
How to 2D-stabilize and enlarge canvas to preserve outside pixels?
7
How do I overlay a photo of a face over a character on a video?
1
How to overlay someone (and his/her movements) in a video clip tracking eyes,face,mouth of a 3d character
0
Going from 2D Mocap to 3D emptys?