How to Do Kinetic Text with Animation Nodes?

How do I use Animation nodes to animate text like this example:

In video link above, I did an example of kinetic text in Moho Pro 12 (very time-consuming). Now I want to do that with animation nodes? I want to learn how to flex text, scale fonts and make them jump, fall and bounce. Thanks in advance.

The first thing to do is create a text object for each character as follows:

The Object Action Output node is used to animate the objects based on that action we created, however, we offset each character along the x-axis by some amount that define the spacing between each character: 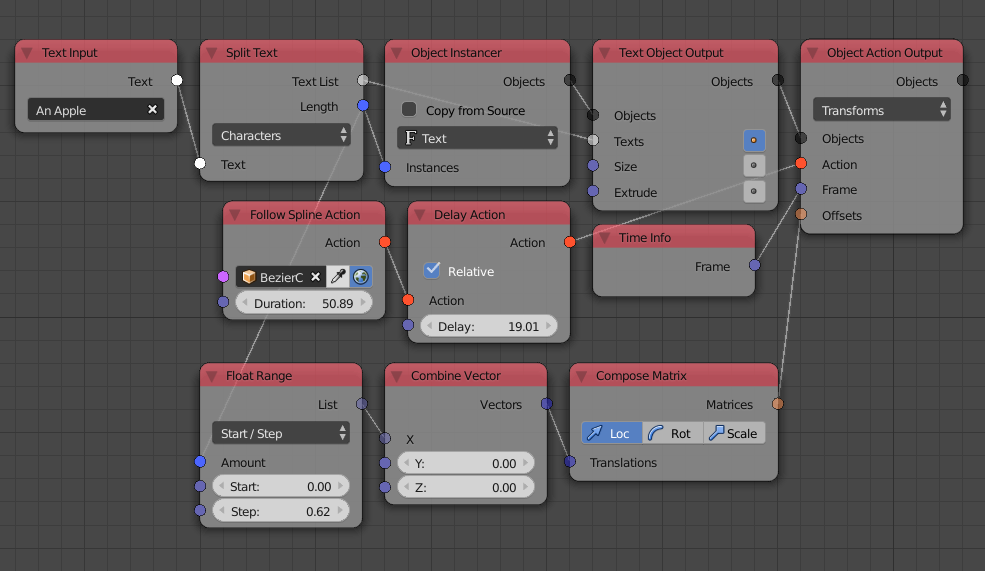 While everything should be ready, the action oriented the texts in a wrong direction, so we are just going to adjust it as follows, but this may vary depending on what orientation you want your text:

You might notice weird character spacing for non monospace fonts, this is because of our choice of a constant character offset, to fix this, a variable offset based on the local bounding box width of each character can be used.

For the bounce effect, a simple Animate Float node to control the x location with the y location controlled by the time evaluated at a bounce interpolation will do. The subtract node inverts the results such that its starts high and ends low while the multiple node controles how high its starts:

The other effects follow the same workflow. Falloffs are also very useful when dealing with such animation, see the documentation on falloffs for more information.

1
Delay Action Node
1
How do I make text wibbly wobbly with animation nodes?