How to create a cable/wire for animation?

So I've created a "noodle" with a path and a bezier Circle that has soft body so that when I click play it will drop and flop about. 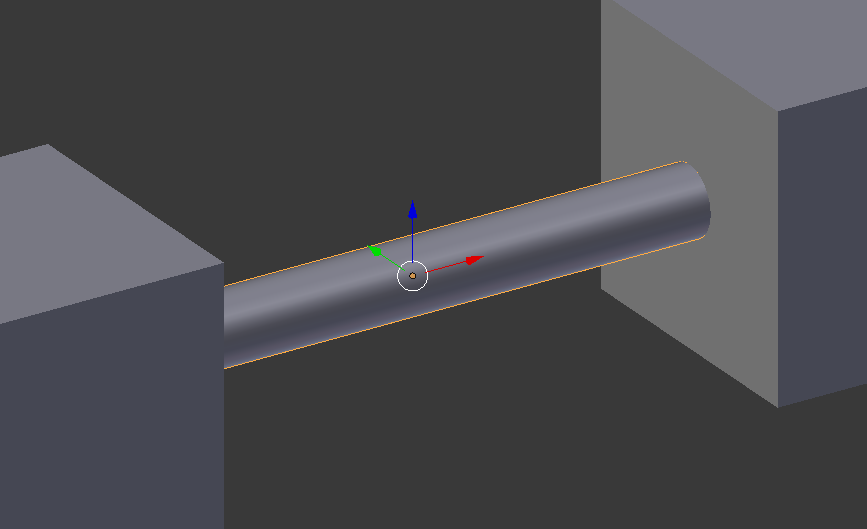 What I'm trying to do is have one of the cubes stationary while the other moves around having the noodle between them stretch and move around like its a cable.

Any tips on this?

Create a singe wire mesh composed of one edge, connecting the two cubes as desired.

Subdivide it a few times in Edit Mode. Create a new Vertex Group for the tips where you will only include the two end vertex (will be used for pinning later).

Now Object Mode select one of the cubes, then Shift select the cable so that both are selected. With both still selected enter Edit Mode on the cable and select only the corresponding tip vertex.

Hook that vertex to the cube by searching the Space Bar menu for Hook to Selected Object. Repeat the process for the other cube with its corresponding end vertex.

Now activate a Cloth physics type for the cable, and pick the previously created Vertex Group for pinning.

Add a Skin modifier to give the cable some thickness

Add a Subsurf modifier to the cable mesh at the end of the stack to get a circular section cable and smoother results.

Rearrange your modifier stack if necessary to make sure both hooks are at the top of the list, followed immediately by the physics modifier.

You can now move the cubes and have the cable behave realistically.

You can optionally add a second Subsurf modifier to the rope before skinning to get smoother bending, or alternatively right before the physics modifier for a more detailed simulation. Beware that the second option will considerably affect simulation complexity, and may severely affect performance and calculation time.

Not the answer you're looking for? Browse other questions tagged animation physics soft-body or ask your own question.

2
How to create a physically based rope in blender?
0
How can I make a cable track follow a linear path while fixed at one end
0
How to make power line cables hang and move with wind?
28
How to simulate a rope?
7
How to make a curve behave like a squeezed tooth paste (to born from a moving object but to stay on ground)
12
Rig a rope spanning two objects
4
Attaching a curve by its endpoints to two spheres
3
Create a stretchy line between two objects?
2
How to create wire between objects
0
How can use a vertex group with a curve in the soft body modifier
See more linked questions

12
Rig a rope spanning two objects
12
How to change camera movement speed on Path during animation
7
How to animate the twisting of a rope?
7
How to get the physics engine to wraps a string around the moving part of a motor constraint?
1
"Whip" falling through handle. Collision + Soft Body
0
How to apply a soft body simulator on a certain part of an object?
5
How do I get a cable to realistically follow the back of my security camera when it moves?
2
Unexpected behaviour on soft body collisions
0
Odd faces (I think) popping out in softbody animation of rope