I have been working with the ICE tutorial for awhile now. The issue is when I change the box to a domain the text already appears to be baked even after I create a new project.

I'm sure I've screwed something up and I've been trying to come up with a fix for days now. I've tried to delete the baked text, undo my last few actions, create a new project and nothing is working.

The tutorial is on youtube that was done by www.littlewebhut.com

I have followed the tutorial to the letter literally. I have even written down the instructions but can't seem to figure out what I am doing wrong.

Sorry I seem to be assuming too much. When I right click on the text I go to the physics tab to change to fluid - fluid then I change the box in the physics tab fliud - domain but I like I said it appears that I have already baked the text. The very first time I tried the tutorial it didn't do that, but has since then.

In the Physics>Fluid menu, try changing the cache path to somewhere else (this should be an empty folder) 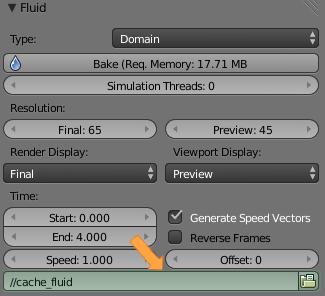 Also if you press "bake" when the fluid is already baked, Blender will automatically overwrite any previous bake in the same directory.

I had the exact same problem and I fixed it.