Hi is there a way to apply a material on certain parts of an object? What I mean is this ... I have for example RUST and PAINT and in the MIX shader I could assign a texture (ie NOISE) so white parts will be one mat and black another or I could paint a texture myself on UV unwrapped surface to design exactly what I want but... Is there a way to AUTOMACIALY "assign" the RUST to the "sharper" edges/corners?

I know Pointiness could do something like this but dunno if there is a way how to "randomly" fade it out cause have rust exactly only on edges and with the same "amount" all the way along does not look "real". Im looking for effect in top-right corner (Wall-e material).

REM: SHARPER mean NOT with assigned sharpness but angle dependent so as could be seen on the picture below ONLY on the edges of the cube. 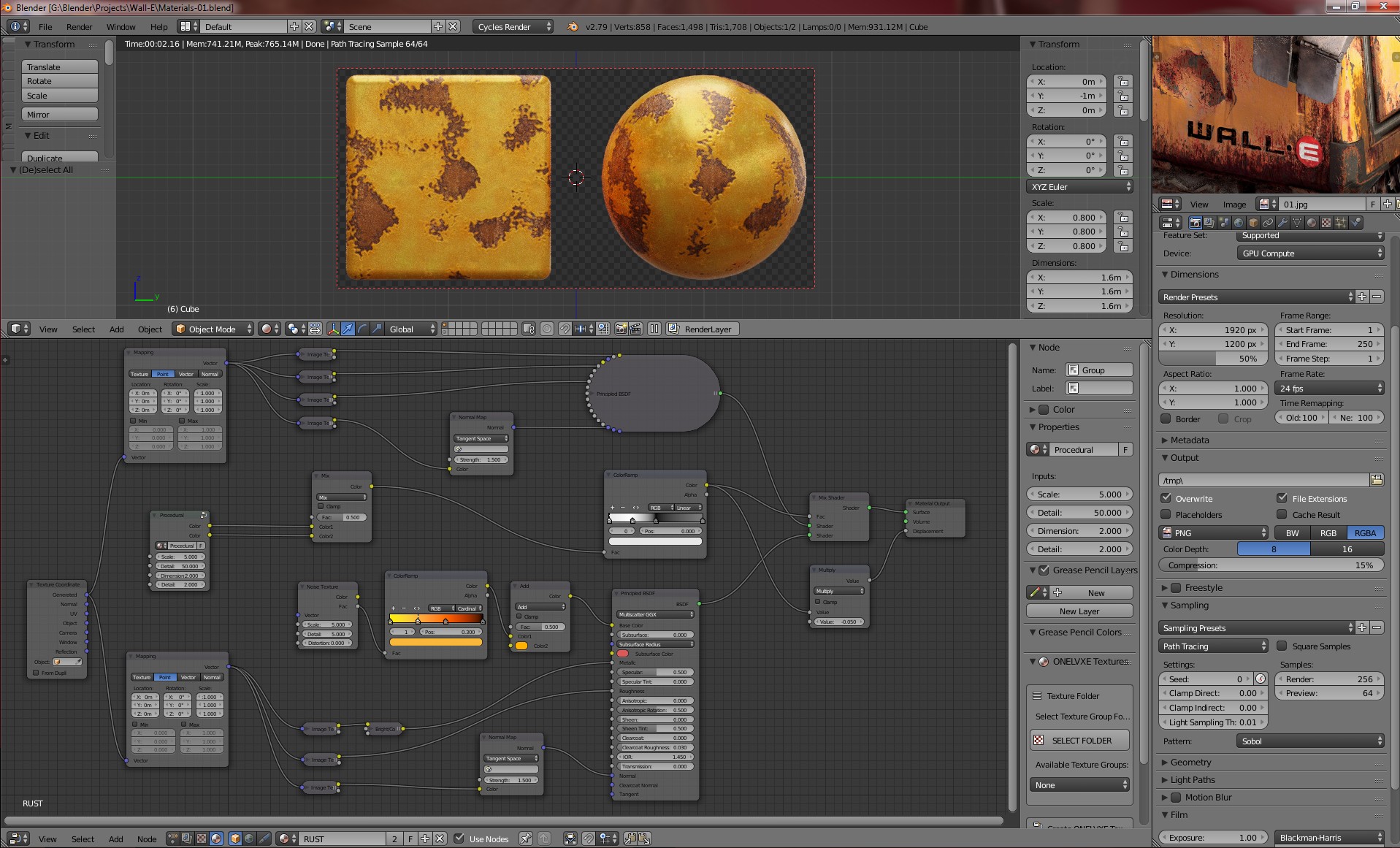 The traditional method for dirt/wear mapping has been to use an Ambient Occlusion shader to catch recesses, with the normals flipped for convex protrusions. In the AO node available in more recent builds of 2.79, the normals are flipped by using the 'inside' option.

AO is not strictly responding to the angle between adjacent faces, it's a representation of how many hits there have been within a distance threshold, from a sample of rays fired in the hemisphere of directions surrounding the surface normal at that point.

A more specific response to the curvature of a surface can be obtained from its 'Pointiness' value, which you can get from the Geometry input node:

... which as far as I can gather uses angles between adjacent edges to approximate curvature.

In order to make it work here, this cube had to be subdivided. A Simple subdivision will do, or, as illustrated, Catmull-Clark with a bevel to hold the edges.

The values generated from these shaders can be used to control the mix of other shaders or colors, or anything you like that can be controlled by a number. If different gradations are needed, you can put the values through a color ramp, curves, or map them to another range in some other way, as in the second example.

Or this, using AO alone, which is not toplology-dependent.

1
How to get material to be brighter around edges
28
Blurring/Feathering a Procedural Pointiness Mask
0
How to make that metall texture?

1
How to hide UV seam through texture?
0
Can the 3D viewport display animated, textured material alpha)?
1
Different texture space in the same mesh?
9
Soften edges of voronoi cells?
4
Apply mask/material by angle of an face