So I'm at a loss. After baking a normal map to the low poly retopology, the end results are as seen in the posted images. The polygons are visible, and there are a large number of visual oddities. There appear to be seam-like lines all across the mesh, which I think are the polygons of the low-poly. In addition, there appears to be warping of the map around the top of the head of the mesh as seen in the first image under the horns. I don't think it's supposed to look like this is it? I appreciate any help on this problem. Thank you.

The images are as follows: 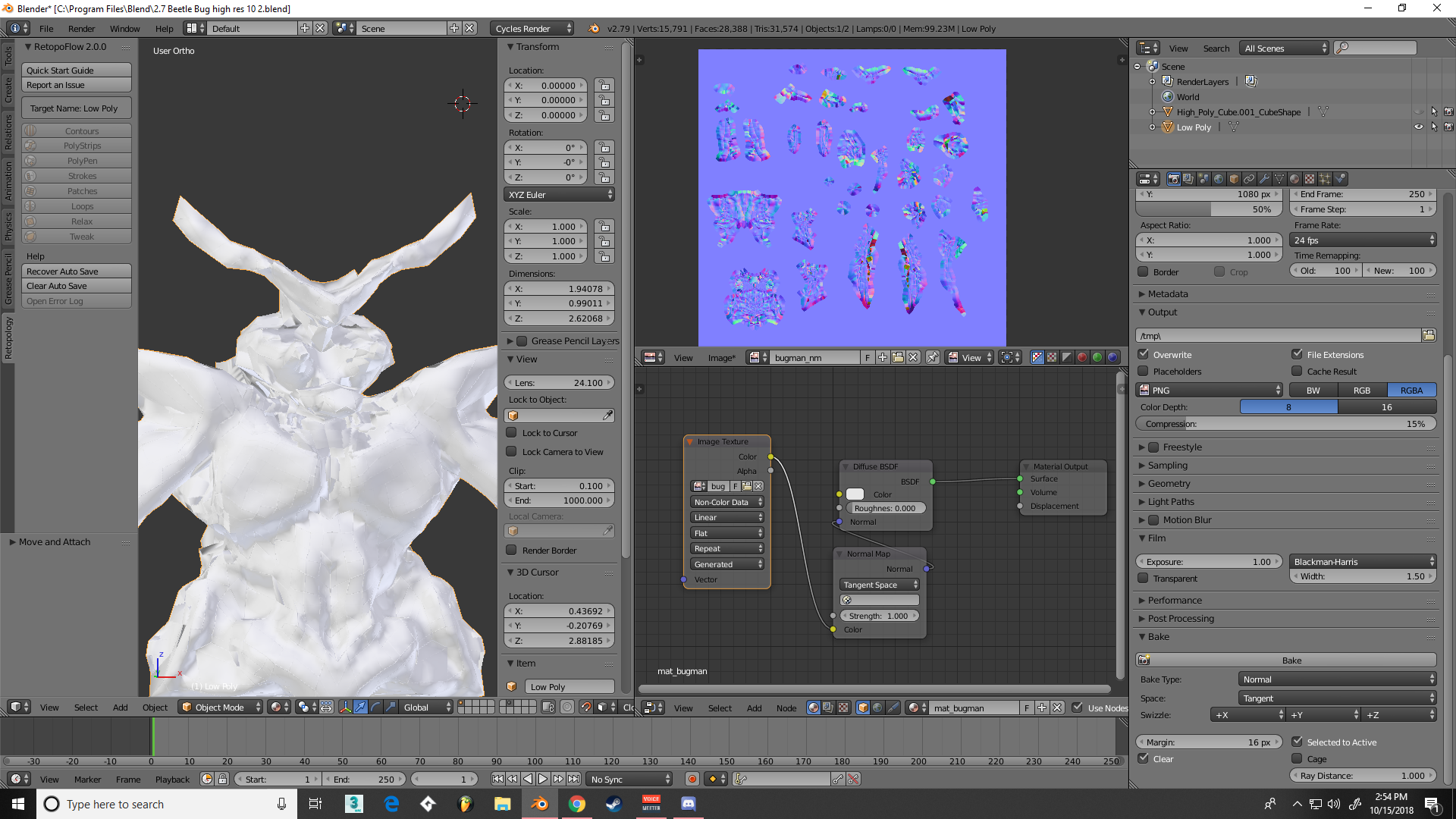 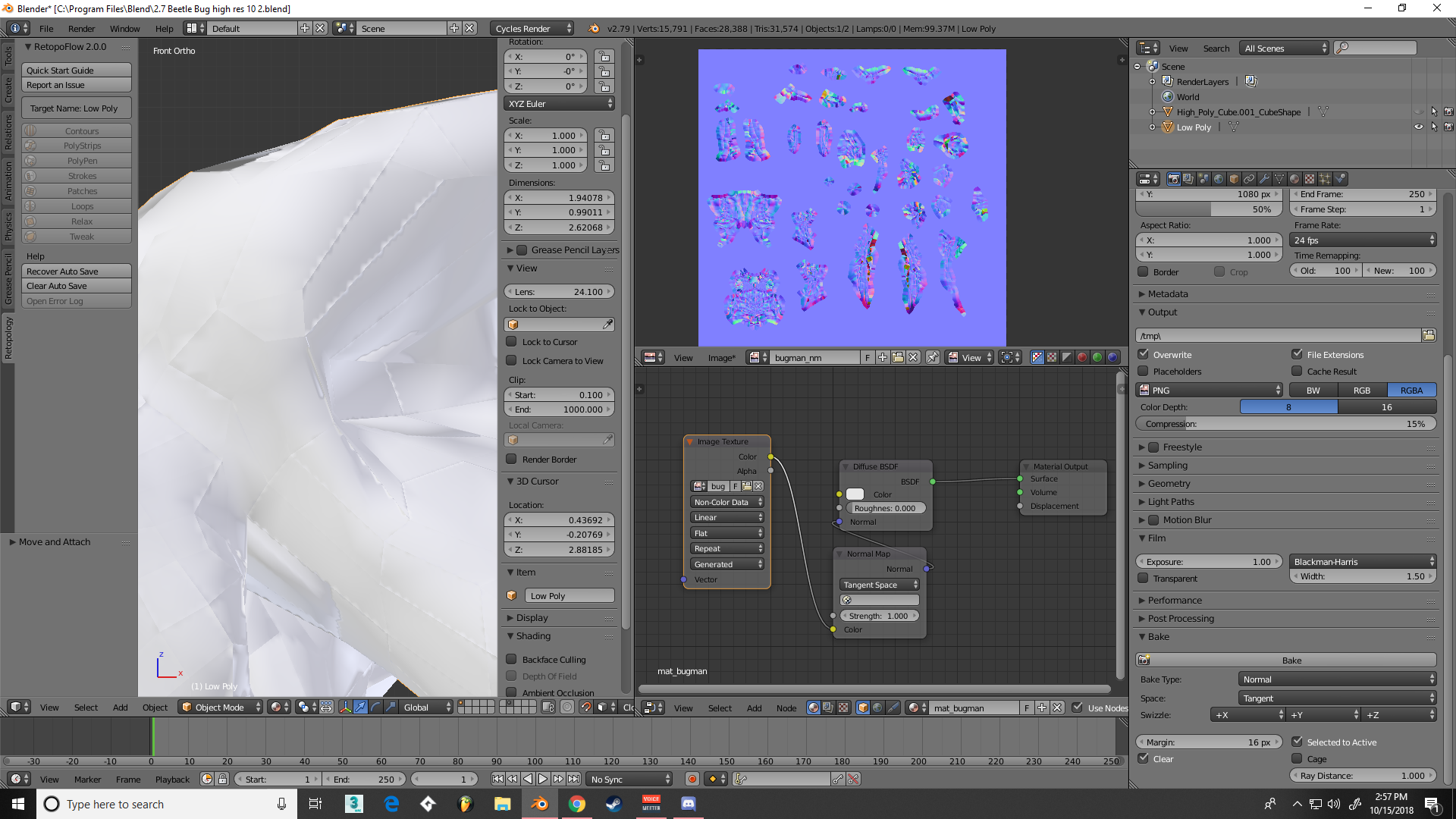 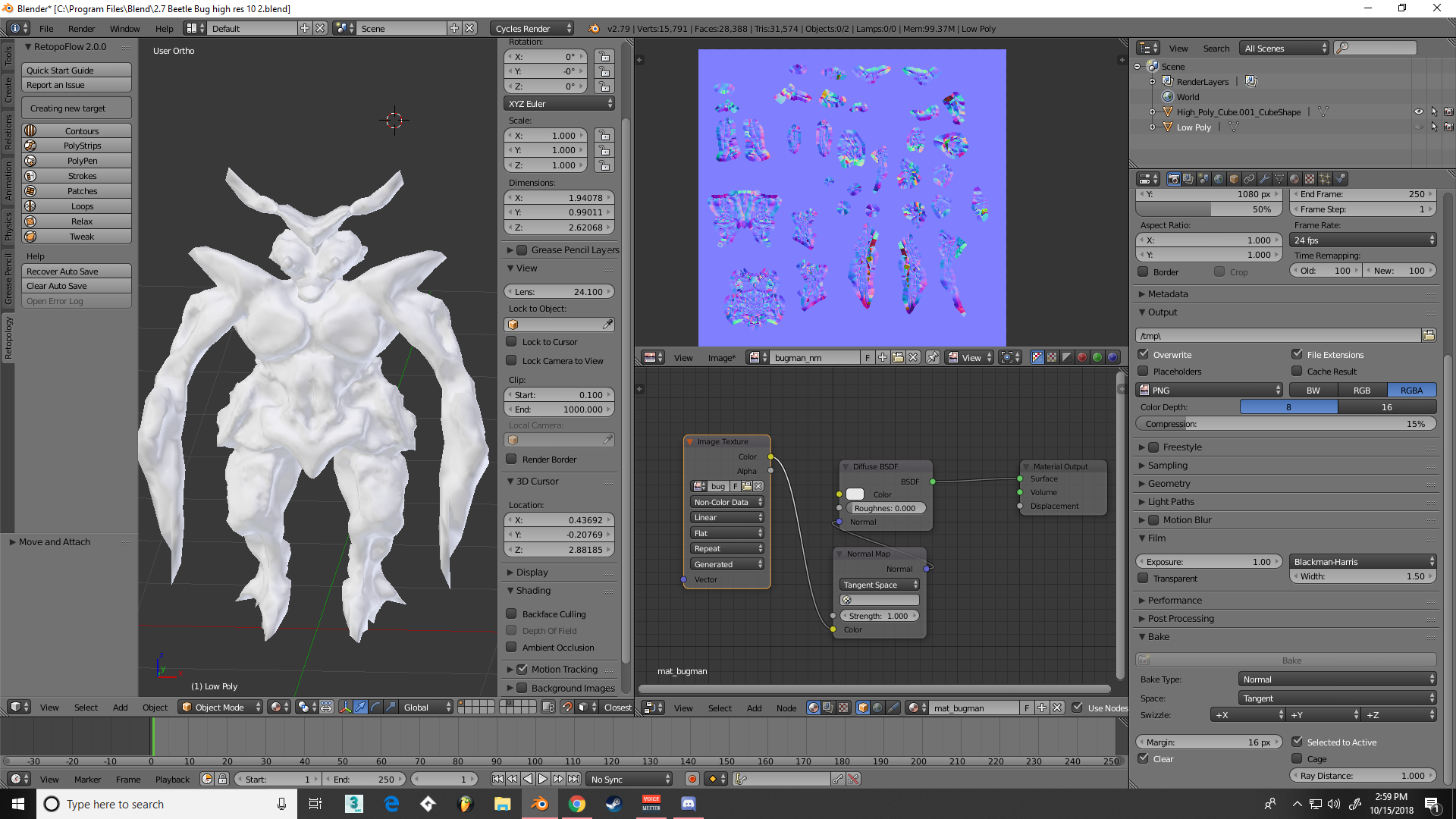 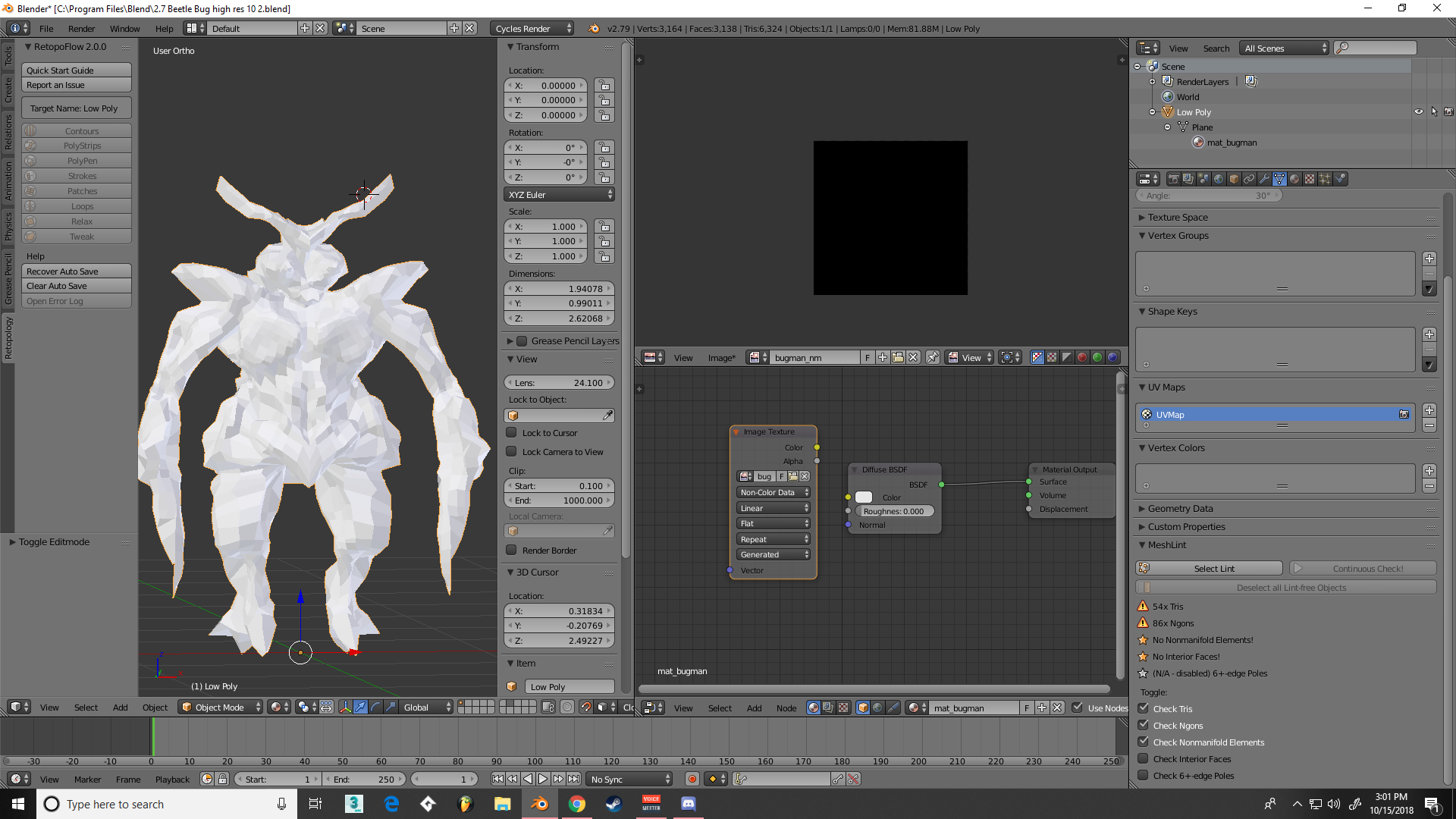 Update (1): Okay, so I've messed around and clicked "smooth" for Faces, Edges, and Vertices under the Shading/UVs tab. I then checked Auto Smoothing, making the angle maxed with 180 degrees. This actually wonderfully solved the seam-like edges. But a strange effect remains across most of the mesh, it appears like a wet stain, and the .PNG of the low poly's head (with normal map baked) below elaborates the issue. It resembles ink blots. 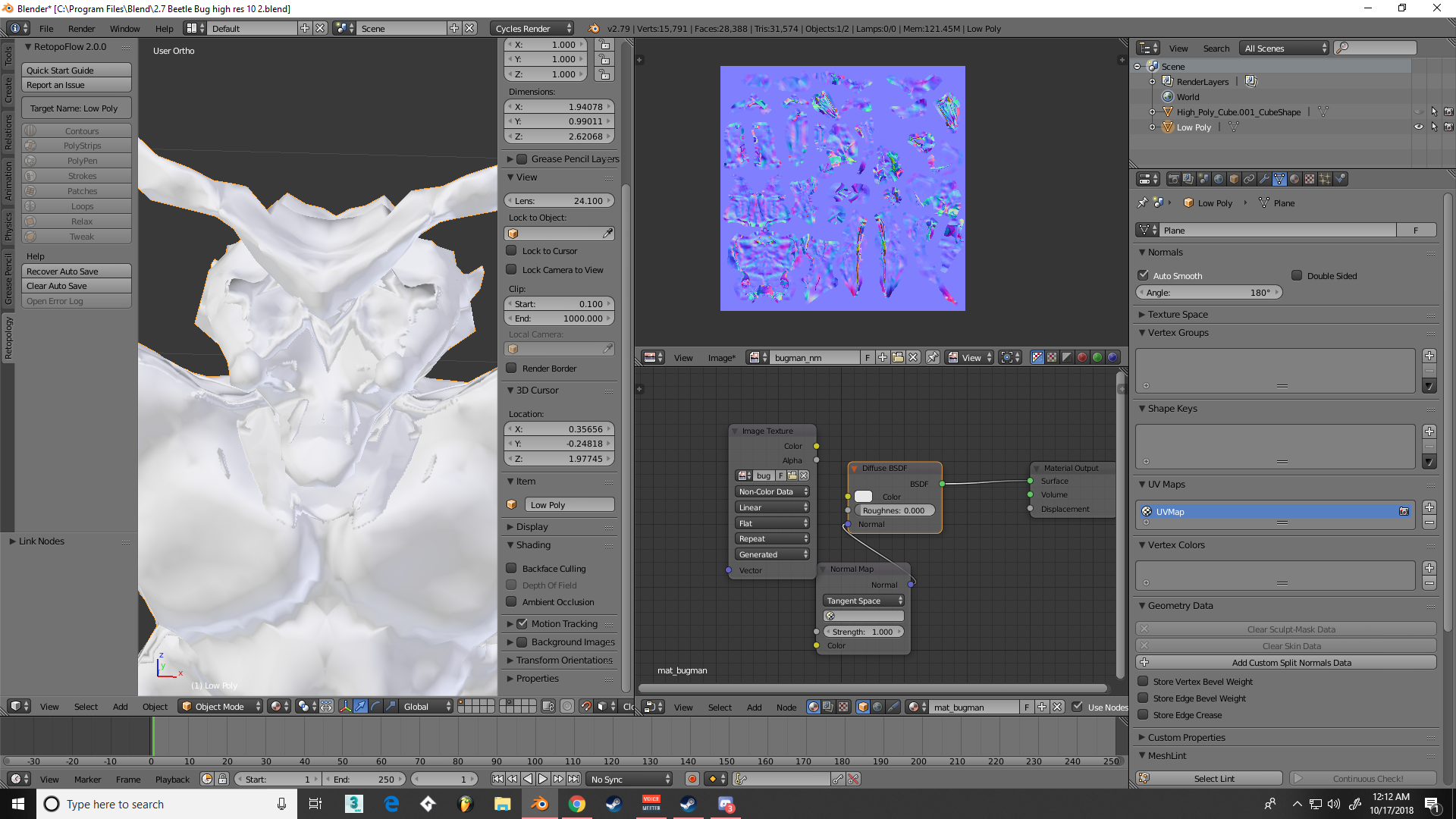 Update (3):Picture of "blotty-ink" artifacting of normal map bake. This is for clarity's sake. 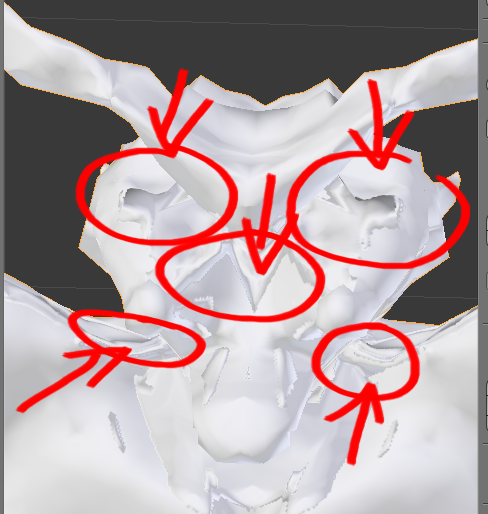 Update (Final): I've finally come to a close on this horrible problem. I don't know the full details of the solution, and it's still wishy-washy at best. I'm assuming that ray distance projects face normals outward. I've noticed the issues much closer to faces that are close to each other, and this is likely because the ray distance projects the normals so much that it hits the mesh itself. So, I lowered the value from 1.0 to .050. I treated the ray distance value very arbitrarily, just playing around until the UV mapping issues were at its smallest. I eventually got a cleaner uv map than before but it was still messy. But since there were only a handful of artifacts, I decided that fixing that in photoshop would be more efficient.

If anyone had a better solution that's less time-consuming/efficient, go ahead and iterate below but I have a solution that works for me for now.

You probably want to switch your lowpoly model to smooth shading, before baking the normal map. I also can't tell how big your texture is, but the UV map has an awful lot of wasted space.

Your high poly looks like it's baked to a low-poly model which didn't have its normals smoothed. So the normals are not interpolated across faces, and the baked texture is trying to compensate for that.

If your output normal map were high resolution enough your resultant bake should make your model look perfectly smooth on a low res model that didn't have smoothed normals.

However, what you want to do, in order to make things easier, is smooth the normals of your low poly model, then bake to that instead. You also need to use more of your UV space efficiently. You need to rotate parts of your unwrapped mesh and pack them as tight as you can as if you were playing tetris, so that you can fit as many pixels as possible on your texture.

If you took all of your UVs and scaled them down, even if you had a 2048 x 2048 image, you could only be taking advantage of 1024 x 1024 space if you do not optimize. Don't spend a MASSIVE amount of time on that if you have to constantly rework geometry, but still do it to some extent none the less.

Not the answer you're looking for? Browse other questions tagged modeling texturing uv normal-map or ask your own question.