How do I make this render look better? [duplicate]

I cant manage to get the right render settings for this image. 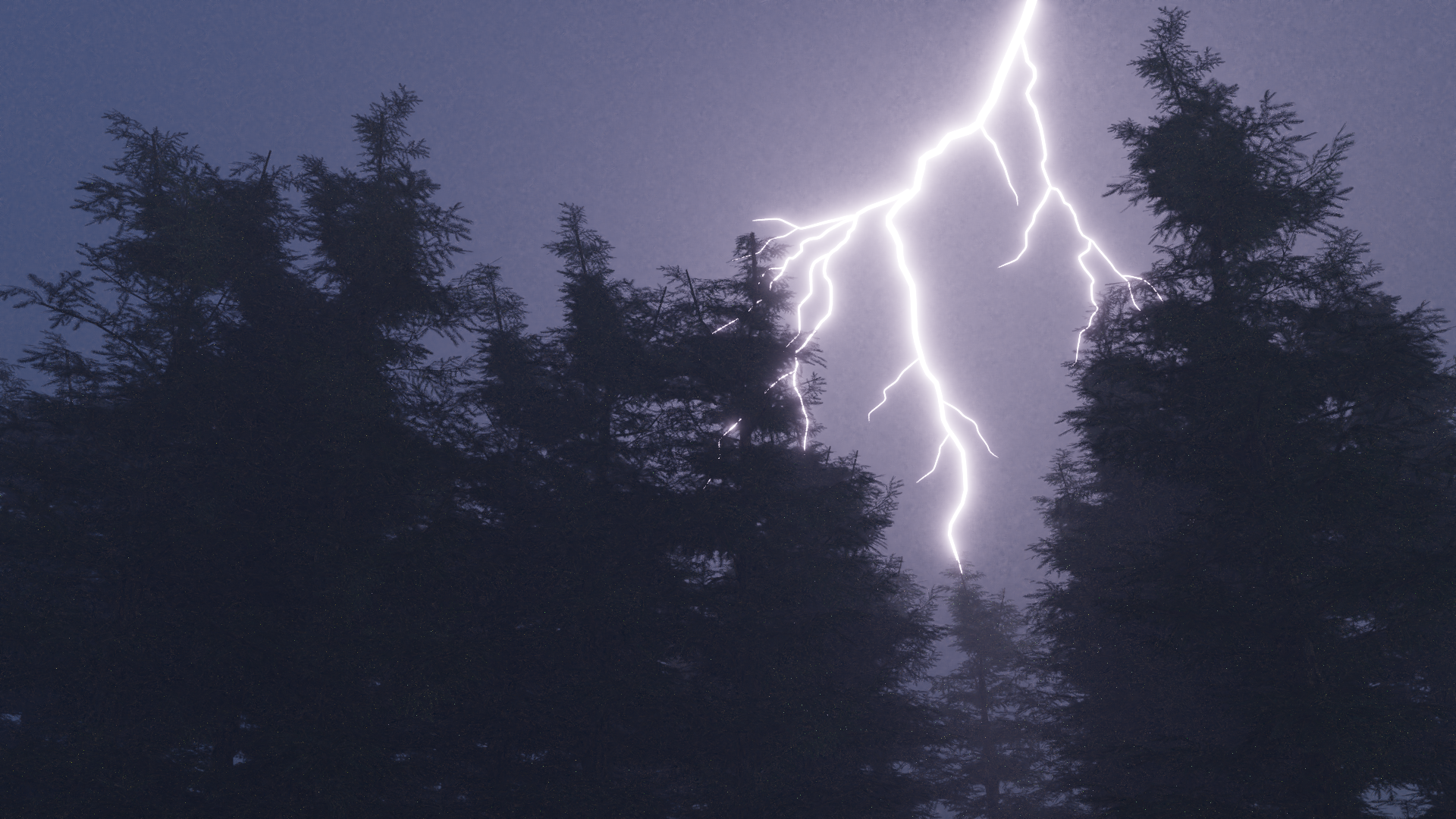 if you look at the render closely you cant see the poor quality. The denoiser in blender makes the image look smudged.

Here's the project file. You can mess around with it and see the results you get. Let me know what you did so I can make my render better.

To get rid of the noise in the volumetric you would need to increase the number of samples considerably and this is probably not practical as it already takes a considerable amount of time to render.

There are things you could do to improve the render times.

An alternative is to remove the volumetrics entirely and, instead, use the compositor to add the effect of the scatter using Blur and Fog Glow effects.

To demonstrate, I rendered out your image as two separate layers - the lightening : 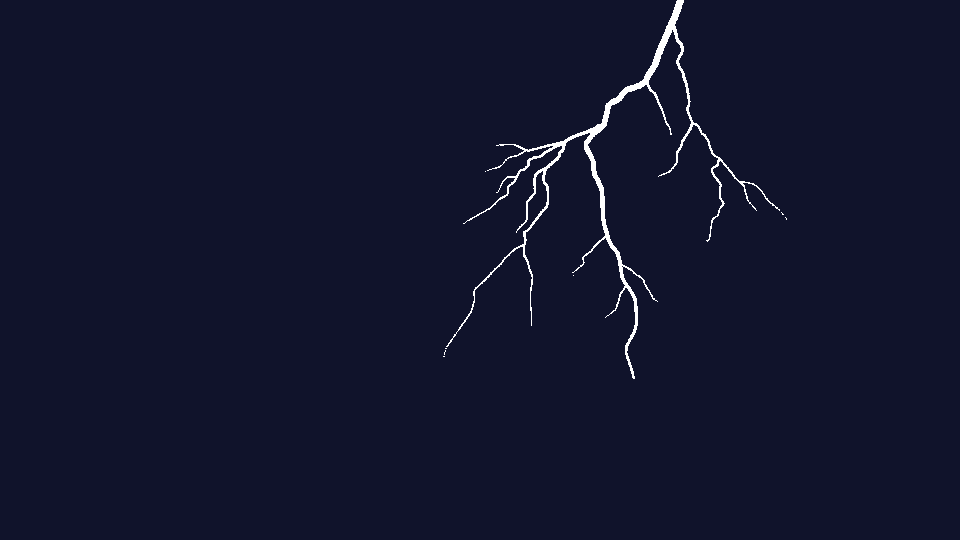 And the trees (but note that the trees have not rendered with the same detail as your sample image - I believe this is due to your images for the pine needle leaves not being packed into the Blend file). It should be sufficient for the demonstration though : 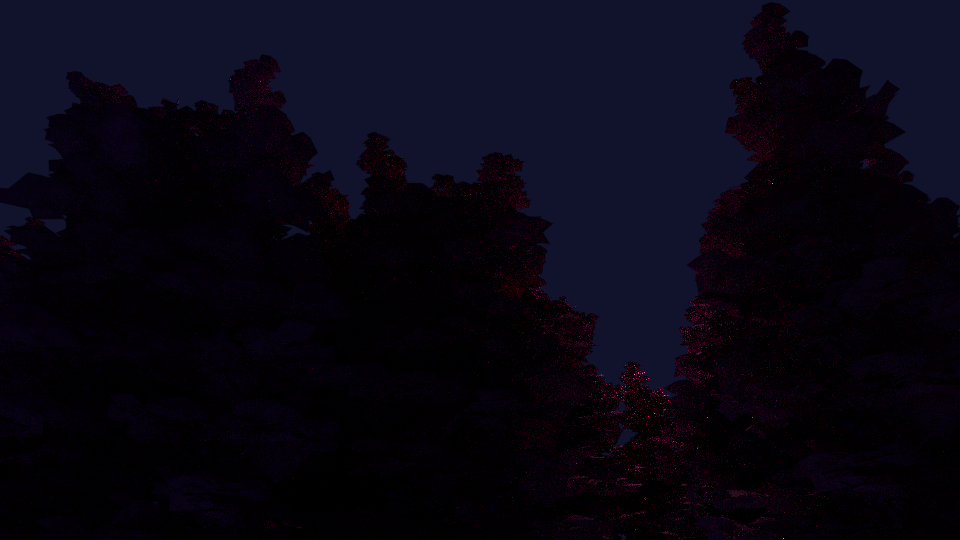 The 'brightness' of the lightening is actually due to two distinct effects - the 'scattering' in the atmosphere (which makes the sky appear brighter around the flash) and the 'glare' in the lens (whether camera lens or the eye). The main distinction being that the 'scattering' light will be behind the trees while the 'glare' is in the lens and so can appear in front of the trees.

This can be achieved with the following compositor nodes : 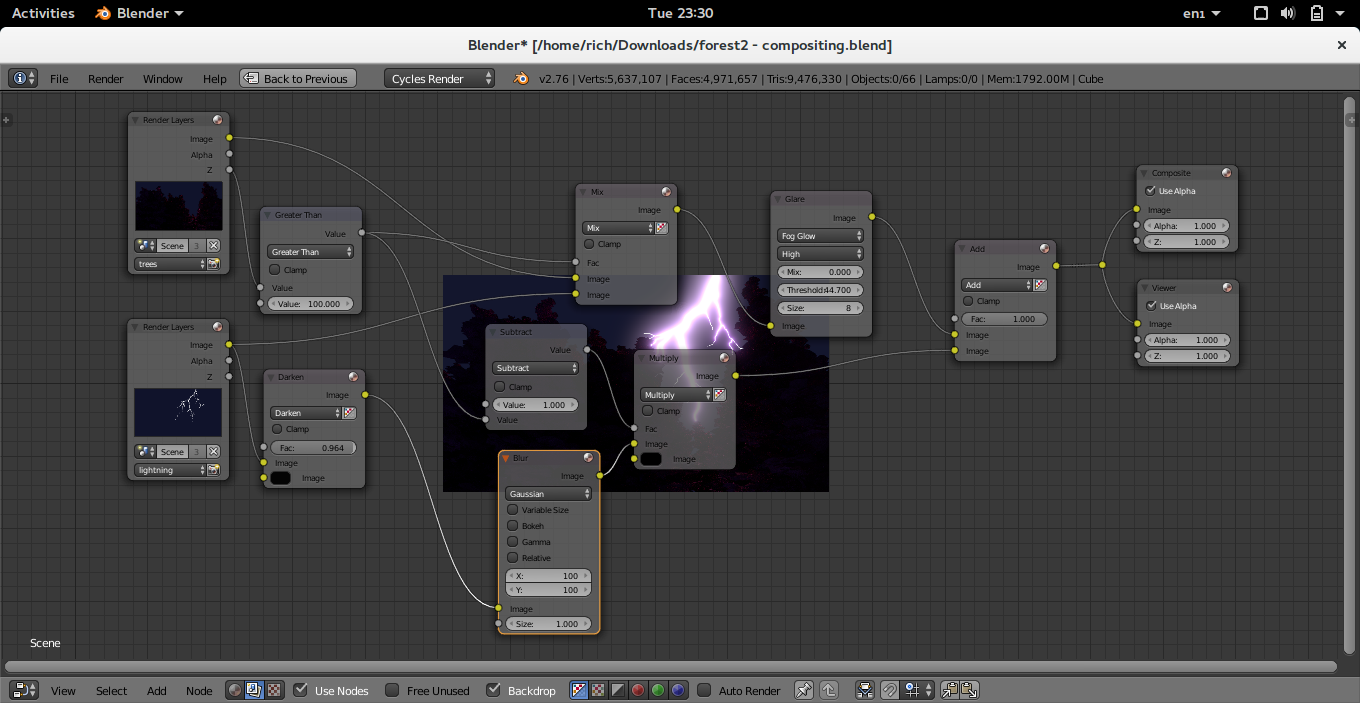 This is a fairly simple setup and some additional tweaks could produce better results (such as feathering the edges of the mask with a blur and shrink/grow for better transition between trees and sky).

Essentially, this setup uses the Depth pass of the trees to generate a mask that can be used to separate sky from trees. A Blur node spreads the light from the lightening to mimic the scattering (the Darken node cuts down the amount of light since the emission is too strong and would 'white out' the entire sky). The mask is then used to mix in the lightening behind the trees and glare added and the brightening of the sky (when unmasked) is added in.

You can adjust the Factor of the Darken node, the Threshold of the Glare and the dimensions of the Blur to tweak the effects. 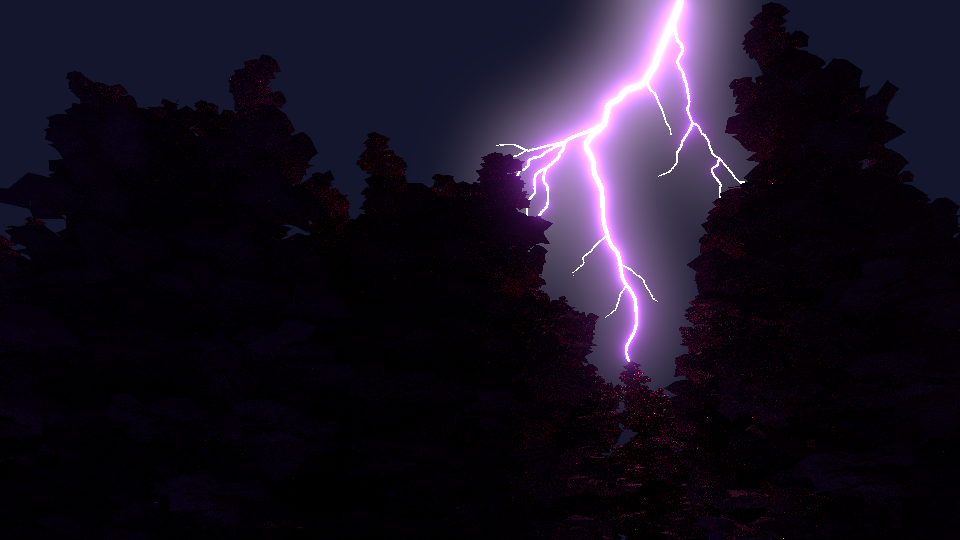 Not the answer you're looking for? Browse other questions tagged rendering blender-internal-render-engine denoise or ask your own question.

21
How to properly denoise renderings?
86
How to avoid noisy renders in Cycles?
45
How to reduce fireflies in Cycles?
0
Cant remove fireflies around emission object (volume scatter)

0
What are some useful ways to optimize my work flow while using blender?
2
Why does increasing resolution and then downsampling to desired size increase render quality?
0
Why doesn't blender use my graphics card?
1
How do I render out a clear render with no blurs?
3
How to render alpha channel and depth map quickly without having to re-render the whole animation?
2
how can we remove the blurry effect that has been caused by denoising?
15
Is there a way I can make render times longer to avoid overheating?
1
How to adjust "Display in render preview" settings in Eevee?