How do I generate pixel-art friendly UV maps?

Here and here, you can see examples of what I'm trying to do in terms of texturing. The UV maps shown for these models appear to be very clean and uniform, pixel-friendly and keep distortion/artifacts to a minimum on the pixel art textures.

How can I do this myself? This is my model. Lightmap unpack looks like my best bet, but it is not pixel-aligned (I set 64 for image size). This results in "Export UV Layout" producing a very blurry image since the UV edges are in-between pixels in the 64x64 image it outputs, making it effectively impossible to create a proper pixel art texture for.

I've tried checking "Snap to Pixels," then pressing G to grab and release, hoping it would snap properly. Instead I simply get a noticeably distorted version of the original UV, which for some reason still outputs a blurry image (but slightly less so) on export.

When snapped to grid, the UV initially seems at least somewhat usable if still a little blurry. But the problem then is it's very misshapen-- what used to be squares now become rectangles, resulting in messed up face sizes on the UV and therefore inconsistent texture stretching (compare the first UV to the second and you should see the distortion).

I attempted to use the "pixel aligned" but distorted UV map and got this poor result, very stretched due to bad unpacking: 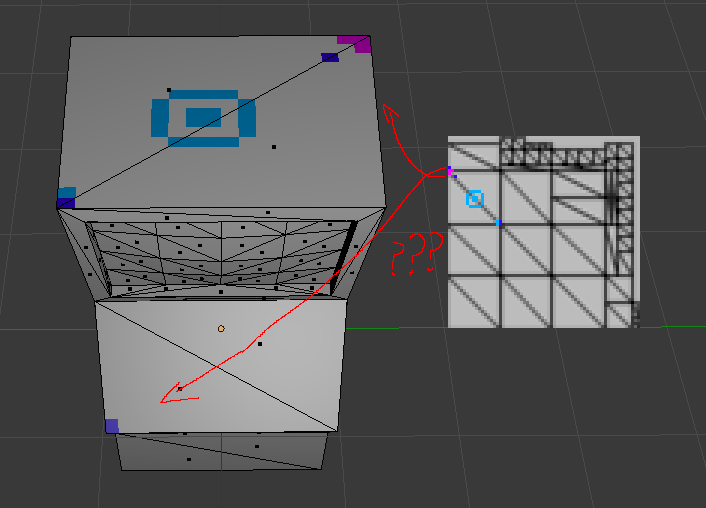 What's the most pixel-art friendly way to generate/export UVs and get results comparable to my two examples?

BEFORE YOU MARK THIS QUESTION AS A DUPLICATE OF THIS ONE, PLEASE READ:

Quote from the above question's answer:

As for distorted (as in stretched or compressed) textures it all as to do with the way you UVMap your textures.

If possible use the UV Map > Cube Projection which will cause minimal distortion, or UV Map > Project From view

This does not help me at all. Cube projection and project from view are not solutions and both result in a disaster of a UV map. Lightmap unpack is close but not all the way there, hence why I'm asking this question.

Well I cannot promise this is the ideal technique, take it for what it's worth.

I decided to unwrap the model in the traditional way by marking seams. This allows contiguous regions to be kept together on the UV map which makes the pixel editing more intuitive. 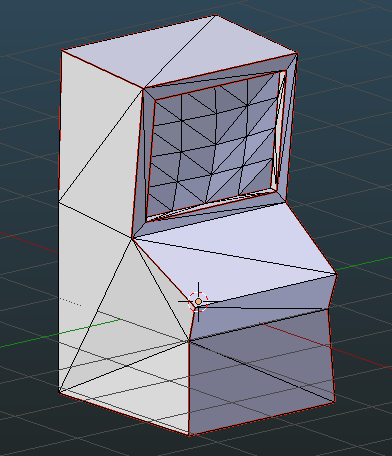 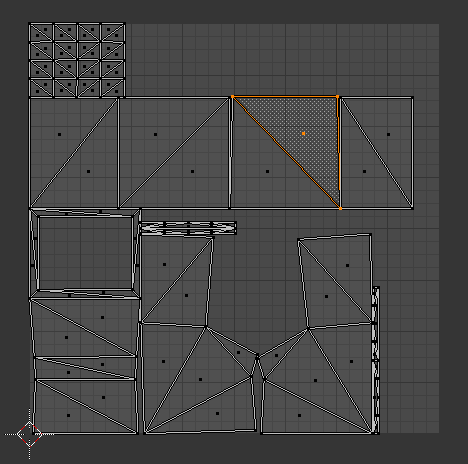 Next you will need to organize your texture space. Your model has some non-straight edges, so I straightened them in the UV layout by selecting the points to be aligned and typing S-->X (or Y, as appropriate)-->0 (zero). I moved the islands around to pack the texture into more or less a square, but I didn't scale any islands individually. I decided to move the two side panels on top of one another to save texture space. When everything was reasonably packed, I scaled the entire UV (i.e., all islands selected together) so it came to the edges of the UV space as much as possible. 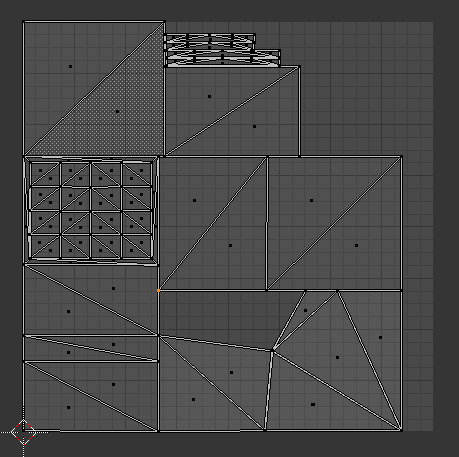 I then exported this UV layout in SVG format. Then, in GIMP, I created a new 64x64 bitmap, and imported the SVG as a path. I chose "Merge imported paths" and "Scale imported paths to fit image" so I had a nice vector overlay for my texture editing. 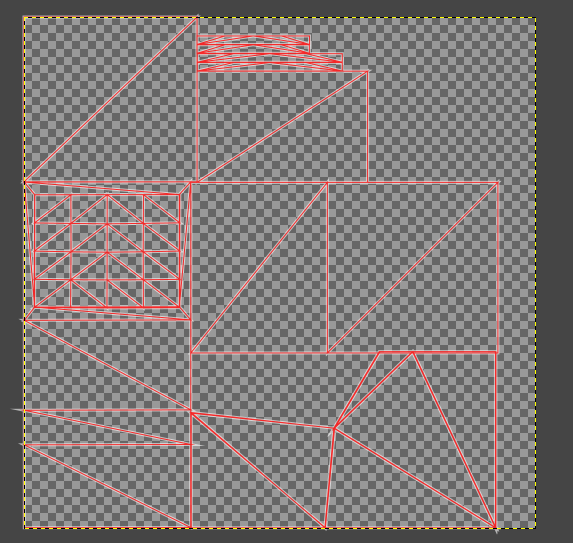 I then painted my texture under the overlay. I tried to fit the pixel boundaries of my texture to the UV grid overlay as well as reasonably possible, but exact alignment is not possible at this stage. We'll fix the boundaries in the next step. 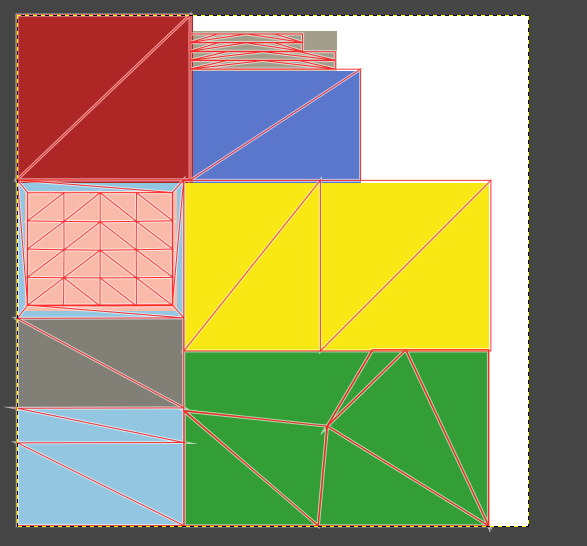 I exported the GIMP texture to a PNG. Back in Blender, I imported the image to the model. Then, in the UV/Image editor, I turned on "Snap to Pixels" (UVs-->Snap to Pixels) and moved individual vertices of the UV (corners, generally) manually to snap exactly to the pixels of my texture. I did not attempt to snap the triangles of the "screen" area to exact pixels, the texture space isn't big enough; I just made sure the "screen" island as a whole fit over the appropriate area of the texture. 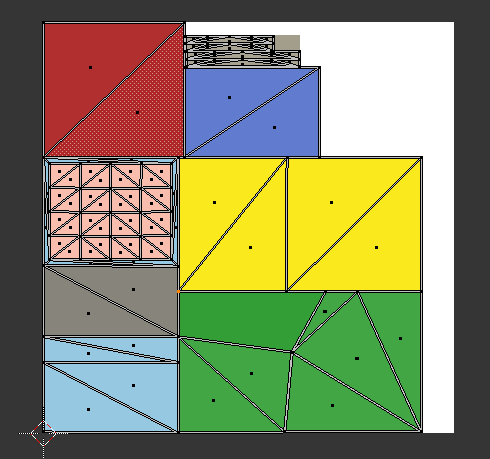 This is how the model looks with the texture:

Anyway, I hope at least some of those techniques meet your needs!

Edit: I thought you might like to see some pixel detail like in the image in your question. Note that you should turn off "Interpolation" under "Image Sampling" in the Texture tab of the Properties window in order to see relatively sharp pixel edges. Also I have found that changing the Filter to "Box" instead of "EWA" in the same tab/area also makes the edges crisper. 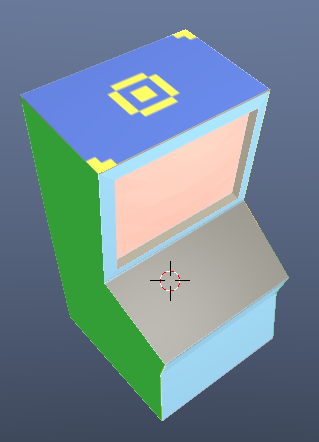 Another edit: it's not a fancy job, but I created a more arcade cabinet like pixel texture, the source for the animation at the top of this answer:

For an alternative method, if you keep getting blurry images, you can always ramp the end result in the compositor.

Take your final art/animation and desaturate it (this is temporary and only to find out what your grayscale colors are). Now on a color ramp set to constant (don't attach it to anything yet) make stops of the different grayscales you have in the nonblurry parts of your images. Now you can hook up the original image to the ramp and it should remove all the blurry (it's still grayscale, but we'll change that shortly). You may need to adjust the positions of the stops to make sure none of your separate color sections vanish. Once you've got that sorted, either mix the original result with the color ramp result on color or change the grayscale stops into the pure colors you wanted in the first place.

Not the answer you're looking for? Browse other questions tagged texturing uv uv-image-editor coordinates or ask your own question.

5
How to not distort pixels?

5
How to not distort pixels?
2
Set Size Of Object To Perfectly Align 64x64 Image
0
pixel selection to cut, paste, and move pixels in texture paint
3
Why Does Blender Distort UV Maps By Default?