This question How can multiple Curves be used to control Camera movement? says that I can disable the camera from following a path by adding a keyframe and setting influence to 0 for that constraint.

But as you can see when I select the camera and look in its constraints, only the track to constraint is there. There is no follow path constraint. How do I see that one to edit it?

Hm, this is another "follow path". Try to make "follow path" in different way: select Curve, Shift-select Camera, then press Ctrl+Shift+C and select Follow Path. Then chose: in constraint settings click on "Animate path" or animate "Offset" value. This is equivalent of "follow path" via constraint. 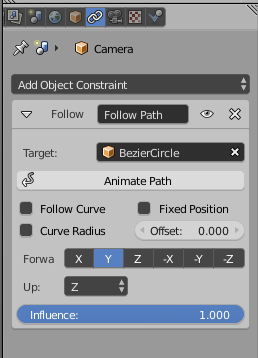 Also, you can add a constraint from menu Add Object Constraint, but in this way you need to manualy select curve object in "Target" drop-down selector. 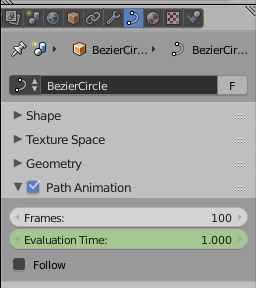 It's confusing.. there's a bit of legacy here. As noted in the docs, there are two mechanisms for following a path.. 'Path Animation' is now deprecated, but still available.

CtrlP > 'Follow Path' sets up Path Animation in the curve, with no constraint on the object.

CtrlP > 'Path Constraint' gives you the constraint on the object, and automatically switches on 'Path Animation' on the parent curve

When you manually assign a Path Constraint, 'Path Animation' is automatically switched on in the curve you select as its target. It has to be to get movement.. but...

Checking 'Fixed Position' puts the constrained object under sole control of the 'Offset' field, ignoring the Evaluation Time in the Path animation.. and parameterizes the curve, 0-1... (and in some circumstances, you have to 'animate the curve' by hitting that button in the constraint.)

Overall impression, two systems fighting, for a while, at least.

Personally, I prefer CtrlP > 'Path Constraint', followed by 'Fixed Position', and keyframing the object's location on the curve, 0-1, in the Offset field of the constraint, by hand. That way, I don't have to dodge backwards and forwards between the curve and the constrained object.

Not the answer you're looking for? Browse other questions tagged animation camera constraints or ask your own question.

9
How can multiple Curves be used to control Camera movement?