But here's where it went wrong... Whenever I save the project, reopen blender and play the animation, blender overrides all the cache files that I renamed and sends them back to their original naming.In other words, all my renaming was just a waste...So, the smoke no longer plays in reverse as the animation plays, but goes to the original or normal movement of smoke. Can anyone help me with this?

You need to Bake the smoke domain cache first. This tells Blender to calculate the smoke and store it in the cache and to effectively mark that cache as 'read only' until yo tell it to 'free' it. This will mean that Blender will not attempt re-run the smoke simulation, leaving your manipulated (reversed) cache as it is. 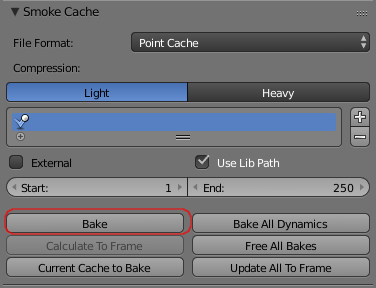 Not the answer you're looking for? Browse other questions tagged smoke-simulation cache or ask your own question.

4
How to pack cache files?
3
Render settings for rendering an animation (with fire/smoke simulation)
5
Problem when rendering fire and smoke in Blender Render
1
Why does blender delete the headlessly baked cache on startup?
9
How can I keep a single frame of a smoke cache?
0
How do I freeze a frame of a Mantaflow Smoke sim?