How can we detect the intersection of a spline with a volume? I've been trying to create edges from the splines to detect the crossing between lines and planes but I'm not sure if thats the correct approach.

What I am trying to accomplish is to detect where a curve enters and exits a volume, any ideas?

I'm trying to reproduce the solution but I found that my evaluation spline node doesn't look like yours, it actually has the parameters from "Get spline samples" node, but also differs in its outputs. Checked hidden parameters but all is unhidden. 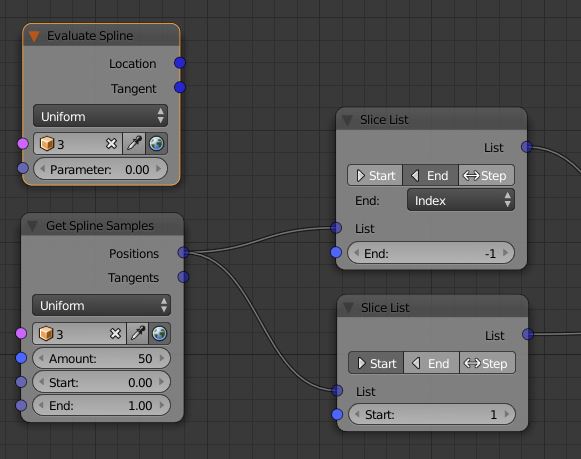 seems "get spline samples" does the job fine. Might be a custom naming issue

After downloading @Omar Ahmad blend file I noticed that this method is far more efficient but still produces inconsistent results. When a play with the spline points moving them around and increasing all evaluate and get sample nodes to resolution up to 5000 the problem persists. I'm sorry if I'm being too strict with this detail (which could be due to a resolution factor) but is very important for me this works as foreseeable as posible. Here the screenshot showing the problem: 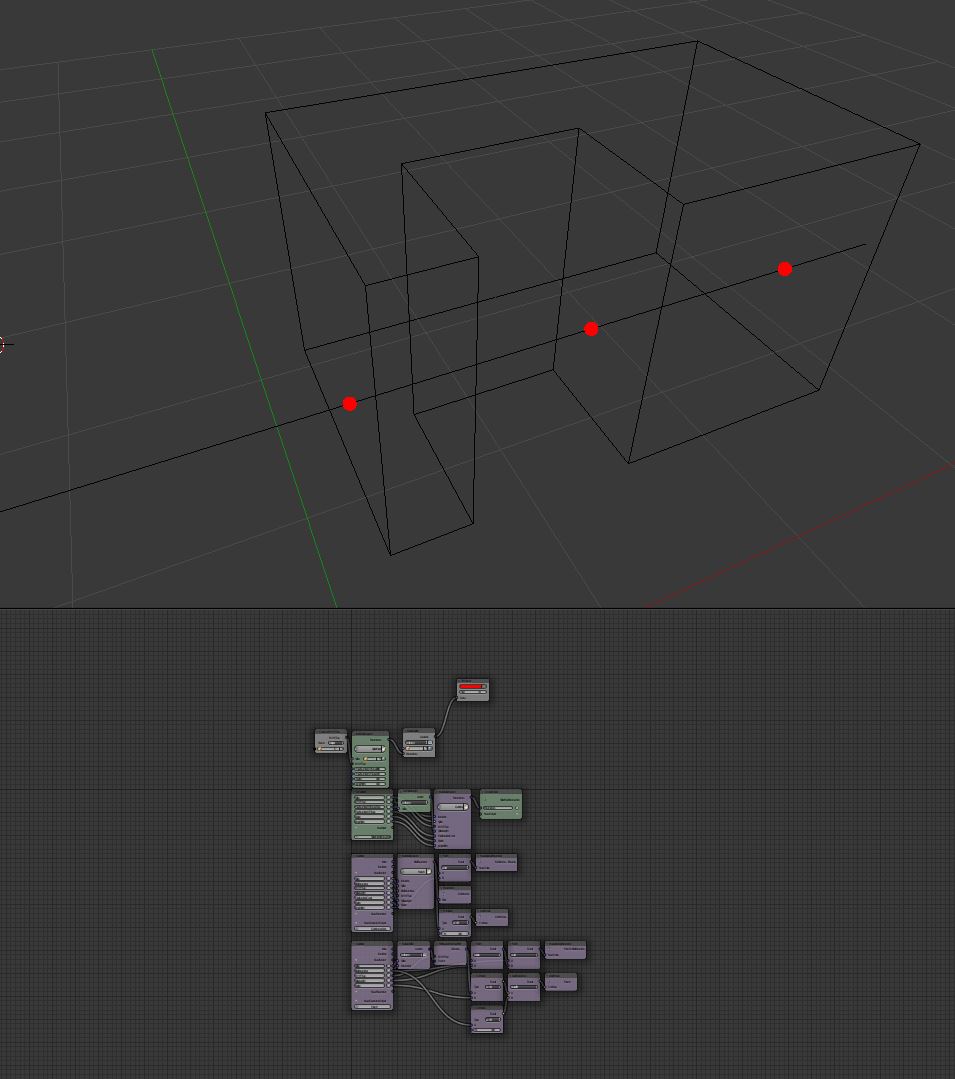 Spline marching is a technique in which you move along the spline in discrete steps until you intersect a polygon. One determines—or guesstimate—if one hit a polygon if the distance between the current position and the nearest surface point is less than some small value epsilon. In which case, one can raycast along the tangent at the current spline point or project on the surface of the mesh to get a rather accurate intersection, this argument is supported by the fact that for some small step size, the spline becomes almost linear, that is, straight. However, the final raycast or projection may not be needed as we might see. 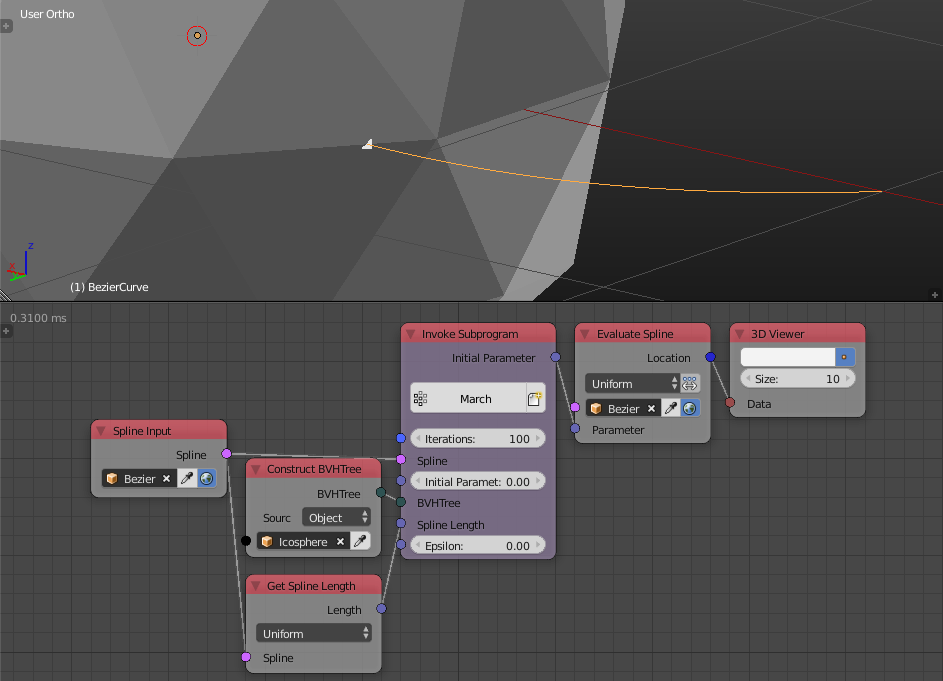 Which is the intersection we expected. If we increased the initial parameter to 0.5, that is, the marching should start from the middle of the spline, we get: 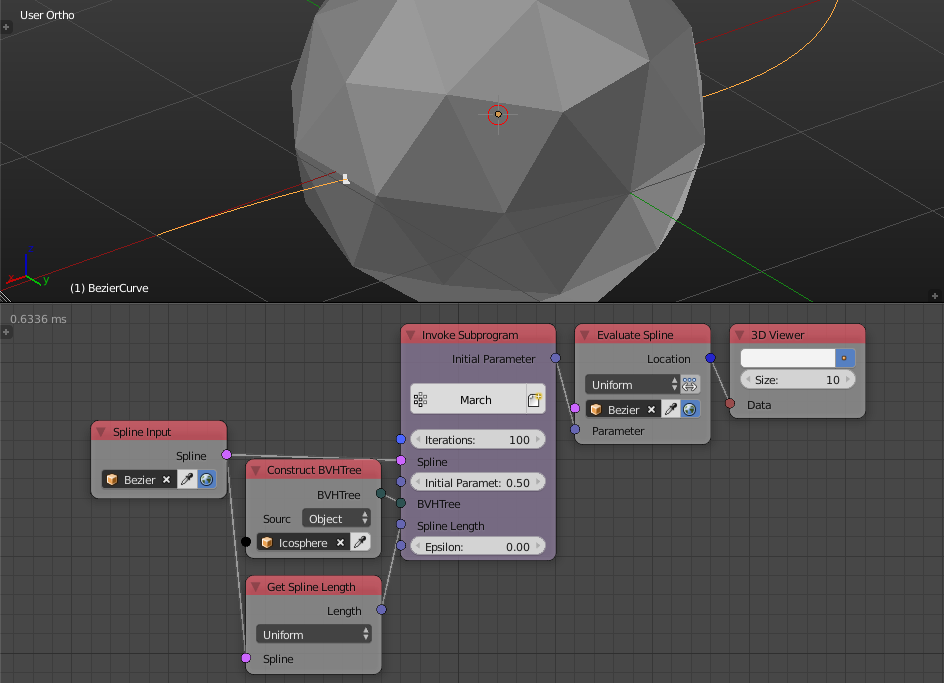 Which is the intersection we expected. If we increase the initial parameter further to 0.75, the loop will execute to the maximum iteration because there are no intersection from this point onward, to avoid this, we are going to implement another condition to check if the end of the spline was reached and break the loop then.

Now the loop is working perfectly. Next step is to implement a loop that generates all intersections automatically. This loop is simple and very similar to the one we create before, we basically find an intersection using the march loop, append it, add a small value jump width to the initial parameter and reassign it. The loop breaks if the parameter became more than 1. 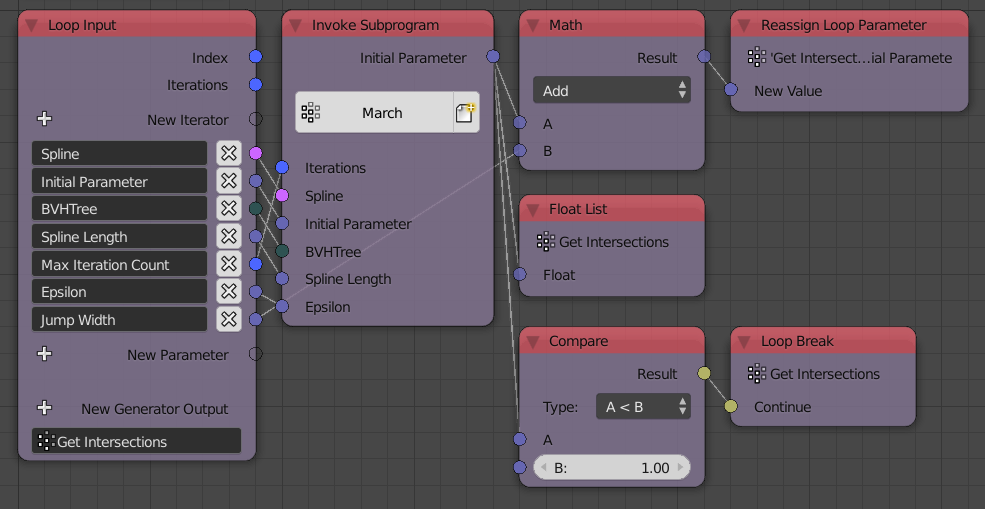 Which gives us exactly what we want.

This method is better because it is significantly faster in most cases (the example intersections described above only needed about 4 BVH surface projection), it is consistent so results are exactly as you expect it and it is controllable.

It is essential that the Evaluate Spline and Get Spline Length nodes to have high resolutions in the Advanced Node Settings this ensures our calculations are accurate as possible.

Naively intersecting lines with planes could be problematic as the Intersect Line Plane node, or the Python function behind it, considers the plane to be infinite. Therefore, as a second step, you would have to check if the intersection really is on the polygon.

I suggest using the BVHTree > Ray Cast node instead. 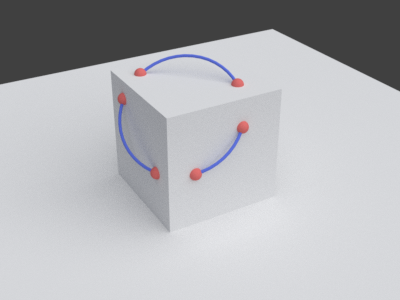 With the Evaluate Spline node (for Aimation Nodes v2.1; Get Spline Samples for AN v2.0) and two different slices of the node's Locations list – vectors[:-1] and vectors[1:] – I create small line segments along the spline. 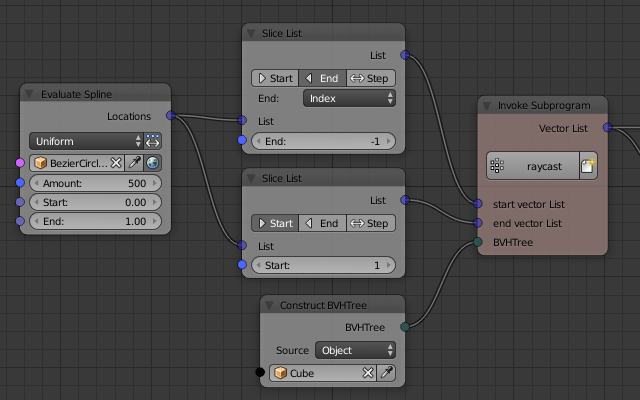 start vector and end vector of these segments (as iterators) as well as the BVH Tree of the object (as parameter) are fed into a loop. Within this loop I call Ray Cast with a maximum distance of the segments' lengths and a minimum distance of zero. (The minimum distance by default is 0.001 or something which might result in some missed intersections.)

With the Condition input of the loop's Vector List output I collect all location vectors of ray casts that resulted in a hit.

The Ray Cast node also has a Normal output that lets you align objects on the face where there is an intersection – e.g. by using the Direction to Rotation node. If you also want to distinguish entries into and exits from the volume then you can calculate the angles between the normal and the segment and check if it's smaller or larger than 90°.

Not the answer you're looking for? Browse other questions tagged objects animation-nodes or ask your own question.