Why is Blender's default cube 2 cubic meters instead of 1?

I had a very frustrating experience with Blender's UI. In the transform section there is location, rotation and scale and I thought scale would be dimensions, which I found out later it is not. Now I think a lot of people will confuse scale with dimensions (which is not even visible by default). Let's say I want to make a 0.1m cube; I tried to set the scale to 0.1 but since the default cube is 2m my new cube is now 0.2m.

Why is the default cube chosen like this and not the more natural and intuitive 1m3?

There is no reason. But the default cube goes 1 unit in every direction, it's the same size as a sphere with a radius of 1 unit as well as for example procedural spherical gradient, a plain axis empty has lines going 1 unit in each direction of all axis as well. If it was 1 unit size and it was centered it would have sides ending at half a unit in all directions, that might be weird. So for what it's worth, it has some sense behind it. I think it is mainly this way, only because it had to be some size, and this is no better or worse than anything else. You can create a cube of any size and hit ctrl+u to save another default file if that makes more sense to you.

Learn the distinction between scale and dimension.

The accepted answer explains re arbitrary but logical choice of default cube dimensions. All default objects are added with unit scale.

Wouldn't a default cube of 1m^3 be better since then a naive user who confuses scale with dimensions would still get the desired result when trying to input a cube of length 0.1 and input that number into the scale?

I say no. As soon as a primitive object is not unit in all dimensions it will no longer be the case that scale matches dimension. Better to learn the distinction between them.

An object is "full size" at unit scale (default). This is a fundamental of 3D maths. An object is transformed in 3D space using a matrix where unit scale, not dimension, is used along with zero location and rotation as default. An objects dimensions are determined by its data, (a mesh for a mesh object). and can be any size. The dimension of the local data in the mesh is always the same as those of the (unmodified) object at unit scale.

If we now apply that scale (make it unit) the dimensions stay the same. We have changed what we consider to be "full size".

If it was better, it wouldn't be for the reason you suggest. Someone's confusion is not a reason to change this so he/she can keep being confused. The fix would be in the UI, but I don't think it is not good enough as it is.

That being said most other 3D apps use a single unit sized cube - for example Houdini and Maya: 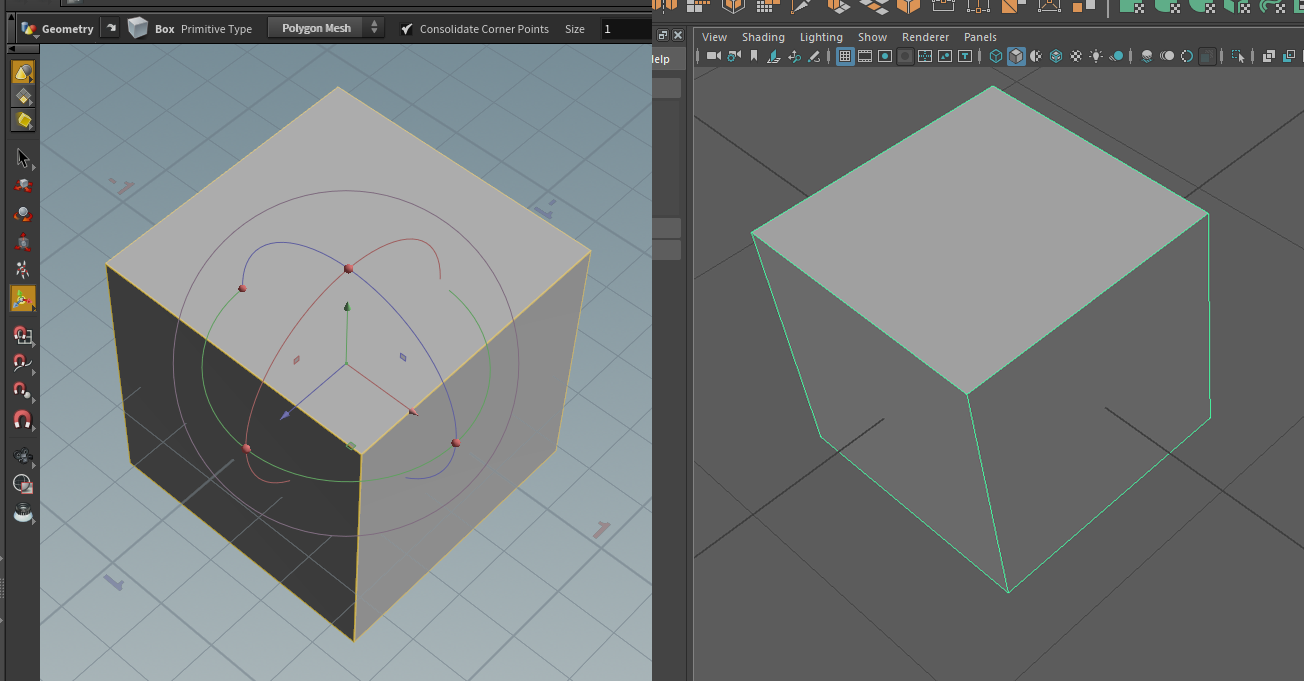 I am sure there can be found arguments why this or that is better, it would be opinions mostly and what the user is used to. There is no single natural intuitive approach.

The Blender cube has 2m sides, because a developer coding Blender (Ton probably at that time) some day woke up and decided on his personal preference that it will be 2m wide - the decision process was probably that a sphere will have a radius of 1 and the cube will correspond with sphere's diameter. And it stayed since because it doesn't really matter.

The scale input/value is "dimensionless" so changing it to 0.1 means 0.1 times whatever the original dimension/size was.

If you need specific dimensions note that you can type in values into the Dimensions x, y, z boxes on the right, and that will change the Scale values accordingly.

I'm surprised that no one wrote about one more reason: all vertexes have locations consisting of combinations of 1 and -1. Nice, basic numbers - just as programmers love them.

1 is a very specific number that has some nice properties. 0.5 would ruin all of that.

I can't comment because my reputation doesn't carry over. To the ones that said scale adjusts the dims, sure. okay - you're missing the point.

To the guy that said it's because there's inherent beauty in causing people to get mad, go insane trying to figure out idiotic scales to model a real world object... I just want to ask you this. Model a simple, hand built set of steps some time using real world dimensions, and then in the middle of your frustration, remember that you said that it was beautiful and you can't see any difference. Also, note that transferring the object to any other program, such as Unity, or 3d printer, completely destroys the dimensions.

And to the person that pointed out the "one more reason: all vertices..." base vertices would be expressed in floating point numbers, so, your example should be stated as -1 to 1... meaning that 0.5 would be a very easy, and a nice, neat number to have. but 100% props for thinking, and not missing the point.

The simplest answer is that the programmers chose radius instead of logical dimensions because they were drop on their heads as children and fed a diet of lead paint chips. And, it's this reason that blender is not accepted at any of the companies that I have ever applied for, worked for, or managed. Including my own company.

To be honest, I have never seen a cube expressed in radius as it's primary measurement.

In my mind, I would say that the better question to ask is ... how do we just fix the underlying object so that we can move on with life? I ask this because for me, sadly, Maya is currently not an option... though I would make religious sacrifices to the dark gods if they made it an option.

2
Half of the scale value not in the middle
1
Is there a way to make the scale an actual representation of the measure system (metric) I use?

1
Python commands listed in the info area do not exist
0
Units and measurements and such 2.79 and 2.80
0
Extrude by unit amount, not percentage