How to [dynamically] pin soft body objects to another mesh?

My goal is to use the Armory addon to move the two soft body meshes to interact some rigid bodies in the scene. For example, I want to apply forces the soft body objects to bring them closer to each other and grab something (a rigid body/collider mesh) in the scene. It is possible that those interactions would push each of the soft body meshes in different directions but I do not want this to be the case. Instead, I want the soft body meshes to be somehow linked to each other in a way that moving/interacting with one will affect the other one too (I basically want to build a simplified version of what is shown in this video from the 33rd second to the first minute). For instance, if a colliding mesh contacts one of the soft body meshes with high velocity from any angle I would like the two soft bodies move in the same direction as a result of this collision.

Therefore, I am looking for a way to somehow glue/attach/pin two soft body objects to something (e.g. bone or another mesh) placed on top of them. However, just pinning the top vertices of the soft body meshes will disallow me to move them freely (as shown here). So I want to have a more flexible type of pinning (hence the term "dynamic") so that the soft body meshes can still be moved towards each other when some force is applied to them so that they can interact/collide with other objects but don't fall down.

I wonder, how would this be possible? You can take a look at the .blend file that I attach to this question to get a better intuition of what I want to do. Here's a screenshot of the scene in the attached .blend file: 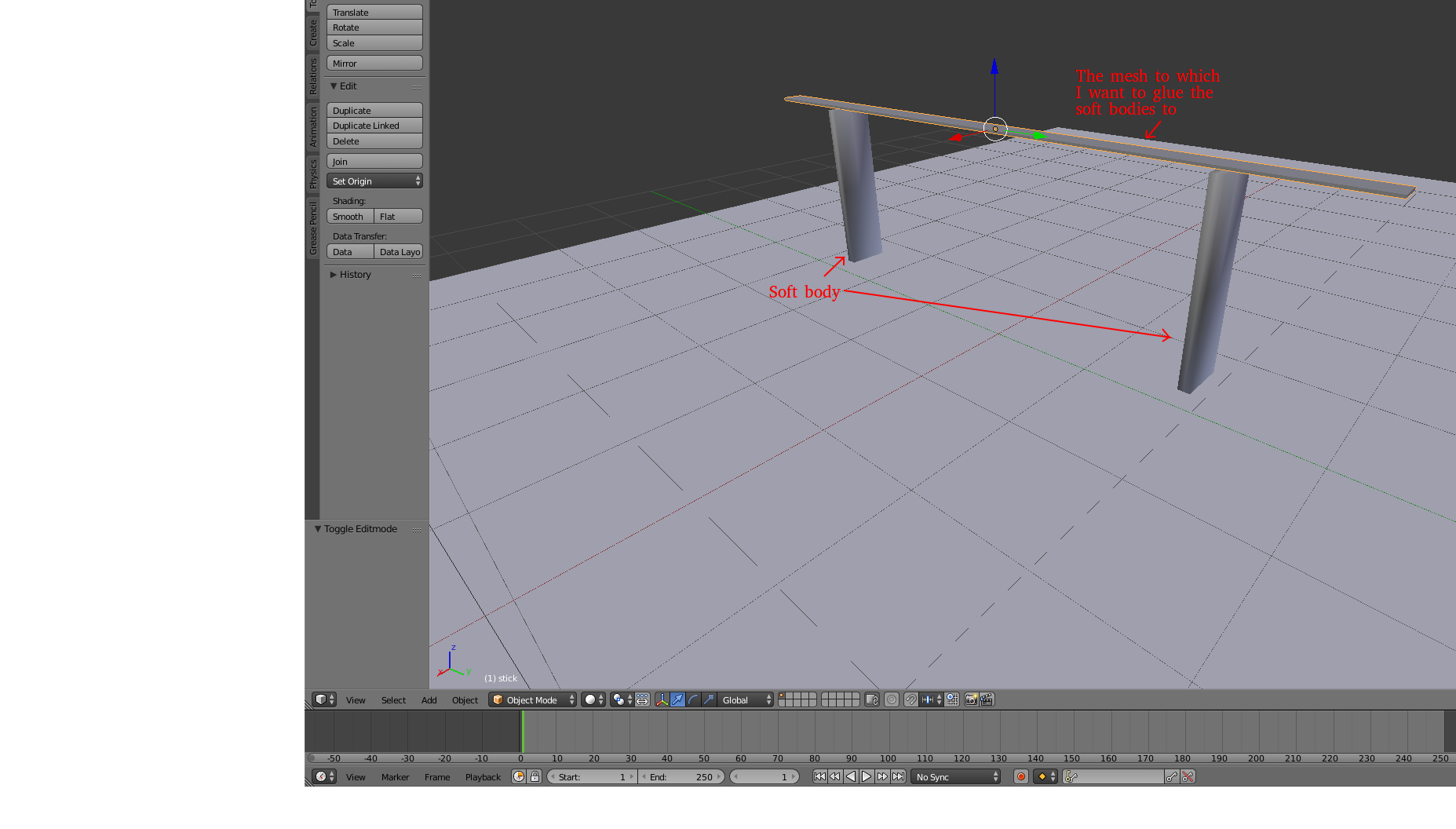 P.S. I'm not sure if the tag animation is correct for my question, but I thought it should be relevant. So feel free to edit the questions and remove if my question is not relevant to animation stuff.

In order to 'pin' certain vertices of a soft body in place, you can use the Soft Body Goal settings with a Vertex Group.

First select the vertices that you want to pin in Edit mode (Tab). Then add a new Vertex Group and click 'Assign' to assign them to the group. Rename the vertex group to something appropriate such as "Pin". 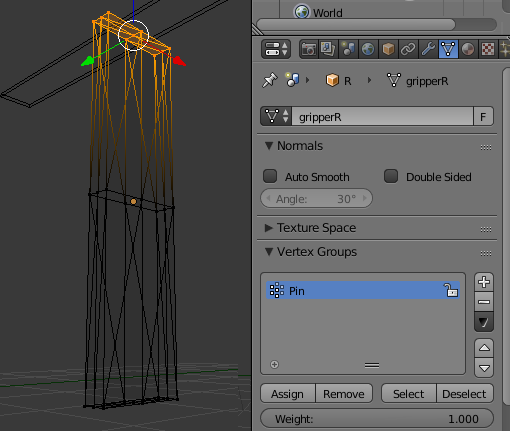 In the Soft Body Goal settings, set the Strength and Stiffness to high values (the closer to 1.0, the more the vertices will be attached in place to the vertices in the starting mesh that you have 'pinned'. 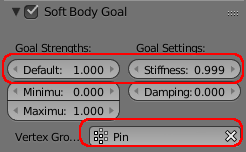 Only those vertices in the vertex group will be 'pinned' - the rest will continue to behave as Soft Body.

You can then either leave the original mesh in place (so it keeps those pinned vertices static) or Hook the vetices to another mesh so that they are pinned to that other mesh.

Not the answer you're looking for? Browse other questions tagged modeling animation armature physics soft-body or ask your own question.

14
Pin cloth to model
2
How to move a soft body object in the scene towards a "goal position" while physics is active?
3
How to make a specific area of a soft body behave like rigid body (or vice versa)?
1
How to make an interactive two-finger robot gripper and grab things with it?

14
Soft body to Soft body collision
2
Move a soft body/cloth after baking
3
How to make a specific area of a soft body behave like rigid body (or vice versa)?
0
How to prevent 2 seperate meshes that have soft-body modifiers from clipping into each other and glitching, even if collision is turned on?
2
Unexpected behaviour on soft body collisions