When sculpting with dynamic topology, there's this weird sort of artifacting issue that occurs when using the subtract option with the crease brush, where it doesn't make a crease in the way I expect it to, but instead sort of flattens out the area, while only slightly creating the the crease I want (I usually use crease, but it seems like any subtraction version of a brush causes weird artifacting). 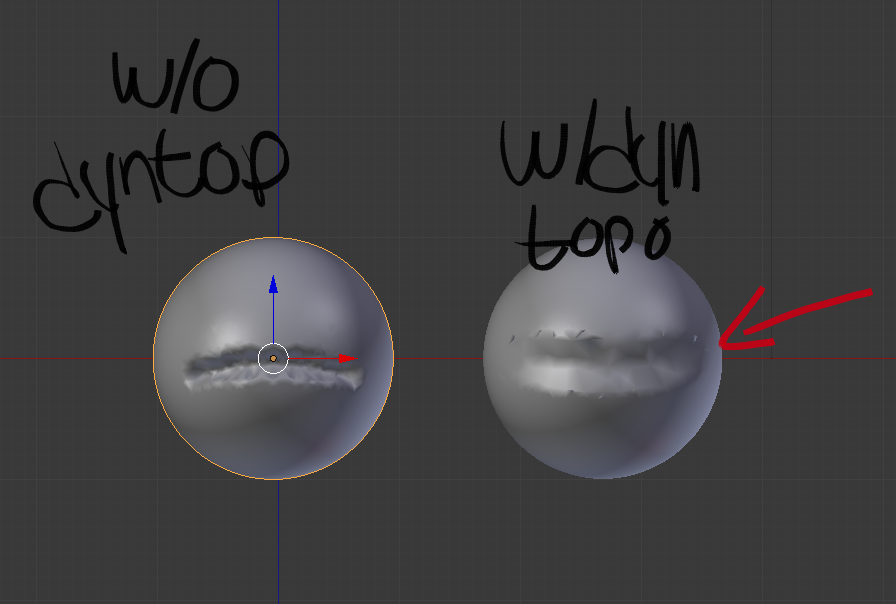 This sort of thing doesn't seem to happen if I only subdivide it and sculpt without dynamic topology on. It may also be notable that the same thing happens in Blender 2.8, for what it's worth.

In your Properties panel > Tool > Dyntopo, Your Detail Size is too high, and as your Refine Method was either on Collapse Edges or on Subdivide Collapse it was creating large triangles and bad artifacts. So, decrease the Detail Size from 12 to 2 for example.

Not the answer you're looking for? Browse other questions tagged mesh sculpting or ask your own question.

2
Why is there no subtracting effect for sculpting brush?
1
How can I add major geometry to a mesh in Sculpt mode?
1
Cannot sculpt, created head from Plane
0
Blender Sculpt brushes don't function properly
1
how can I use a brush CUSTOM re-topology?
2
When sculpting, my brush changes from Add to Subtract and viceversa