Alright: I'm new to blender and for the last several days I've been struggling with a problem with the rigid body physics. Here's how it goes:

Under the physics tab of the property panel set the Shape to Mesh. The convex hull is like a shape drawn around the mesh with no concave angles, so the feet of the chair might behave unexpectedly, as if there's just a flat plane or a few flat triangles on the bottom. It also has some degree of approximation, it doesn't create a new point for every point on your mesh.

I don't think there's a way to visualize the convex hull that Blender generates for an object. It probably looks a bit like this but with more triangles and different triangulation pattern. 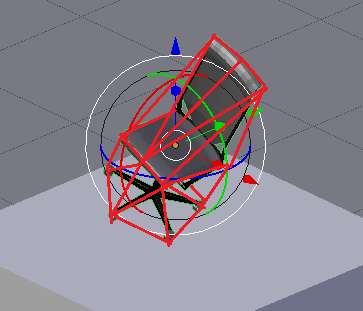 Your chair mesh might not be entirely suitable for collisions if it is non-manifold, particularly if it has open backfaces. If this is the case you can create a separate mesh just for collisions that represents the shape of the object but not it's appearance. You would then parent the chair mesh to the collision mesh so it moves exactly with it, and then hide the collision mesh from rendering so it doesn't cover the chair.

Finally, change the Bounciness under Surface Response of the chair and the surface your chair is landing on. When Bounciness is set to 0 the surface stays impossibly still and doesn't apply any force to the object landing on it regardless of how bouncy the falling object is. Likewise a falling object with Bounciness zero appears to receive no force when it's Bounciness is 0. Most objects should have at least some amount of bounciness in order to behave as expected.

0
Rotation in rigid body physics
5
Why do my chains separate when falling when I use physics with them?
0
Camera doesnt follow ball in tube (Blender Game Engine)
0
How to create 'inner-tube being towed by boat" physics effect
1
Rigid Body Problem - objects not colliding