I'm making a 2D platformer game and the character I have is similar to that of donkey kong country. When the character you are playing moves (such as donkey kong), the unplayable character (like diddy kong) follows and does exactly the same thing except a few frames later and ends up by his side again. I am going to learn python, but have not yet since I am doing school, and I have not found a way (python or no python) to get this to work. I have tried doing a slow parent, but that cuts corners and the character that is following ends up floating or dipping below ground level. Here is a quick depiction of my problem: 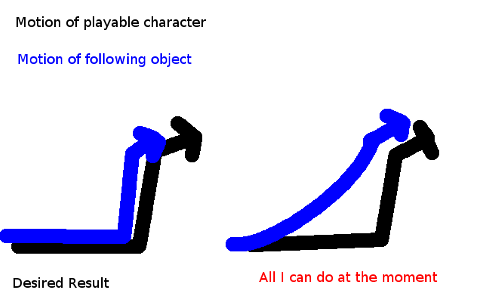 I would love it if someone has a solution, but if it involves python, you'll have to show me step by step how to do it. :) Thanks!

Browse other questions tagged game-engine parent or ask your own question.

1
adding a delay for a driver

2
How to copy BGE logic from one object to another using script?
2
BGE: How do I make a sensor of one object trigger an actuator of another object?
0
BGE: “Record Animation” for just one object
0
BGE How do I get a objects location/Rot/velocity into a property?
0
How to make multiple pivot points on one object (BGE)
0
How to get a camera to copy location of character from a different scene in BGE
0
Trying to copy objects across scenes but it duplicates my scenes instead (BGE)
0
copy object location to another scene? BGE
0
Better way of marking a location for an object to copy
1
Copy light location in relation to object