How can I create pre-rendered animated sprites with Blender and use them in Godot game engine?

How can I generate an animated pre-rendered sprite in Blender like in the 2000s games like Age of Empires, Commandos, StarCraft and then use them in Godot game engine? The animations played must change depending on the key inputs.

Note: for this demonstration I have used the character Akai E Espiritu and the animations Idle (looking left and right) and Standard Run from https://www.mixamo.com/. The animations were exported in FBX at 60 FPS.

Note 2: it is possible to use pre-rendered sprites in a 3D view, it is called an Imposter Card. It is useful on assets like fences and wood planks bridge like in Rayman 2. And also for characters (they can be animated), trees and building far away like we often see in car games. In 3D you won't need to render the lighting information but the color, roughness, metallic and a normal map. More informations: https://youtu.be/YvOhIFnAa8U You can also use Billboard, it's 2D images always facing the camera,you can use Sprite3D or AnimatedSprite3D for that in Godot.

Download the Godot project and the .blend used to generate the sprites: https://drive.google.com/file/d/1Pqz6iRkdhgR2prsMmH_R-S-cnmXkqxNu/view?usp=sharing

Games that use(d) this technique

At that time almost all the best looking 2000s isometric games were pre-rendered and today they often look better than most 3D games because they allow to get almost an infinite amount of details as long as the texture resolution allows it: https://www.kotaku.com.au/2013/03/the-best-looking-isometric-games/

They often age very well. When Donkey Kong Country showed the first pictures of the game, the journalists thought this was a sneak peek of the new Nintendo 64 and it looked better than almost all the 32 bits games available at that time.

Cycles render will be used to generate the sprites.

You need an invisible ground used to catch the shadows projected by the sun. Add a plane, scale it by 10 and center it (Alt + g). To make it invisible but catch the shadow go in the Object tab of the property panel (the icon is a cube) and at the bottom in Cycles Settings check Shadow Catcher.

Your model must be above the ground and all your animations must loop.

It is important that you animate your asset in different actions and not pack all your animations in the same timeline. This will later allow to play all the actions at once to position the camera correctly because once the camera will be positioned it will need to keep the same coordinates for every other sprites of the same asset.

Duplicate your character and set a different action in each layer, this will allow to switch between animations by enabling a layer. Use the first layer for the ground and sun, this layer will always be enabled to bake your sprites.

Set your camera in orthographic view mode and the render resolution. For a retro game style or a game where the assets are displayed from afar like a strategy game or simply to save space and memory you can use a low resolution. I will use a render setting of 64x64 for my character, do not forget to set the percentage scale to 100%.

On most isometric games the camera angle is like this:

To place your camera center it with Alt + g, go in Camera view with the key 0 of the numpad, press G to move it then press your middle mouse button and drag the mouse to the bottom to move it backward. This is just to make your asset visible, to unzoom change the Orthographic Scale in the property panel.

Add an empty at the center of your scene and make it the parent of the camera (select the camera first, then the empty with shift then press Ctrl + p and click on one of the setting).

To know the best position for your camera display all your animations at the same time by pressing Shift on the layers to open them. Set the animation frame when the character does a long movement like for example the leg behind when running. Rotate the empty and check if everything is visible in the camera border, don't forget to check the shadows too by enabling the rendered view.

After that change of key frame and check another action of the character with a big amplitude like an attack with the hands or sword forward. The border of the camera from the previous action must not be changed, you can only unzoom and move the camera slightly. 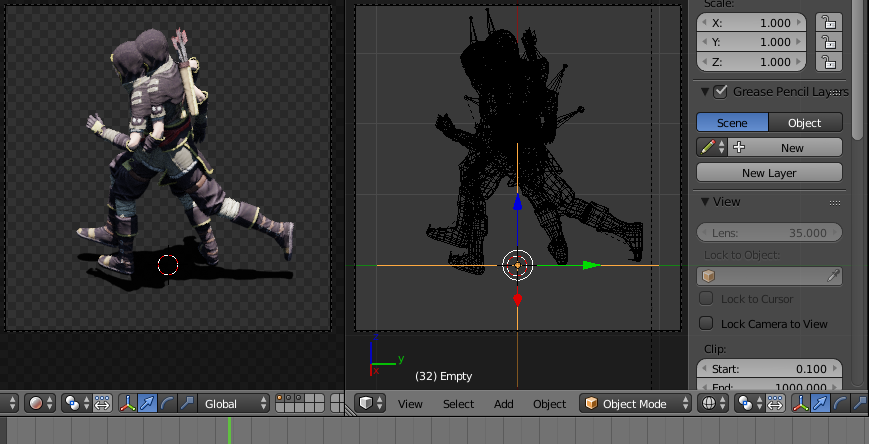 Create your folder structure directly into your game's folder, for example from the root of your Godot project.

You can put all those folders inside a GFX parent folder:

If you use 8 directions don't forget to add those folders:

Important: do not render the last frame of your animation so your character can loop correctly.

Enable the first layer which contain the ground and sun only and enable the layer of the character action you want to render.

Click on your rigging to see the number of frames used and set it at the end frame of your animation.

Click on Animation in the render properties or press Ctrl + F12 to render it.

Each frame will be saved and each time you will switch back to Godot the sprites will be imported or updated.

In Godot select all your sprites with Shift, in the Import tab uncheck Filter or set the preset to 2D Pixel. The filter blurs your image, it behave like an anti-aliasing to avoid flickering but if you have used a low resolution and don't want post-processing for a retro style looking game or simply want to display the source images untouched I suggest to disable it.

You can also get a bit more anti-aliasing by increasing the render samples. 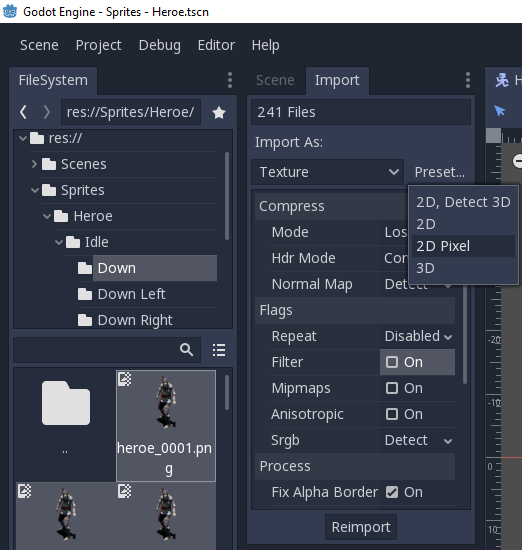 Add a KinematicBody2D with two children: the AnimatedSprite node and the CollisionShape2D. For the collision use a Circle shape on the feet of your character. Don't move anything excepted for the AnimatedSprite node, this is because your sprite must be to get his correct Y position in order to fix the visibility of it (in the "Fixing the depth" section). 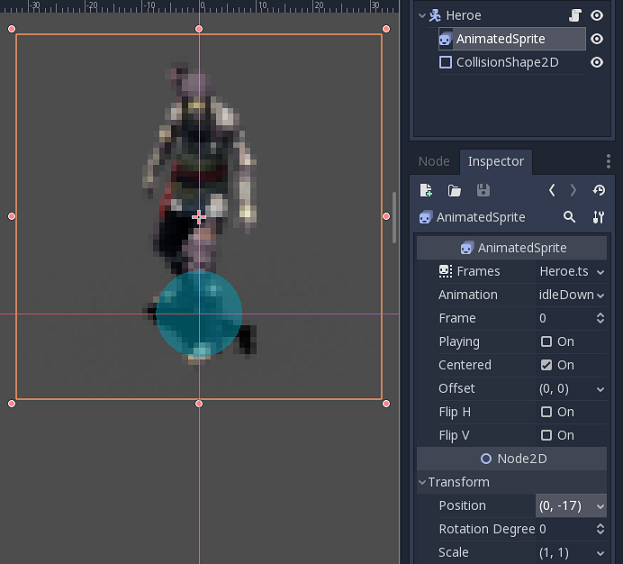 Create different animations, to nae them indicate the action and the direction like this: "runUpLeft". For 8 direction here are all the actions you should get (you can use spaces):

Do not forget to set the correct frame rate and to check if loop is enabled or not.

Here are the vectors multipliers: 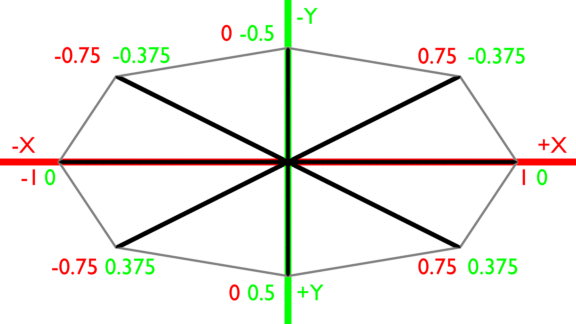 You can also add a timer, when a key is pressed the countdown is reseted. When no key are pressed and the countdown reaches 0 you can add an extra animation, like the character sleeping or dancing (or one of both with a randi() % 1).

Fixing the depth (sprite in front of another)

In a top down 2D game, bellow is closer to the camera so a sprite bellow another must appear in front. By default the sprite visibility priority is set by the Z index then the position in the node hierarchy. To set the sprite bellow on top of the others you just have to add all your sprites as a child of an YSort node. You can eventually add them as a child of a TileMap node an check Y Sort. 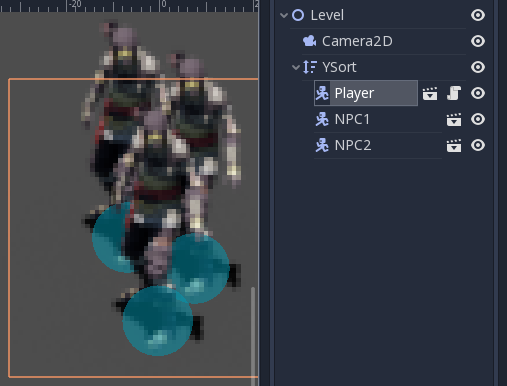 You can add contours in the compositor by plugin the Alpha output of your image to a Filter > Dilate/Erode node. Use a negative distance, then multiply it with the original image with a Color > Mix node. You can then render the animation, the contour will be added automatically on every images.

Instead of 8 directions use 4 directions only, do not use the diagonal inputs script. This will also divide by two the amount of sprites used in your project.

To get a retro look you can reduce the resolution of the game and keep this resolution in fullscreen mode. For that go in Project > Project Settings, in Display > Window and divide the 1920x1080 resolution by the same number to keep the same aspect ratio. For example 640x360 by dividing by 3.

Check the fullscreen button. At the bottom at Stretch change the Mode to "2D" and the Aspect to "keep".

You can also use the camera zoom setting but decreasing the game resolution in the Project Settings slightly improves the performances.

Select your rigging, in the graph editor go in the first frame, select every frame with the "a" key then press S then the number you want. If your source animation is at 60 FPS and you want to reduce it to 15 FPS you will need to divide the scale by 4, so type 0.25. With a scale of 0.1 the framerate will be reduced from 60 FPS to 6 FPS, ideal for a Game Boy type of game. Again do not render the last frame especially in low framerate or your character will do a long pause between the last and first frame.

Don't forget in Godot to set your animation at the same framerate.

You will need to download a batch processing image to import all your sprites and reduce the indexed colors between 8 to 256 colors. SNES games used 16 colors (15 colors + alpha) and old PC games like Age of Empires II used 256 colors (255 + alpha).

You can use Positioned dithering (because for retro game look because less efficient) or Floyd-Steinberg dithering to improve the color transition.

A software you can use is XnConvert: https://www.xnview.com/en/xnconvert/#downloads

Once you have opened it, do Add folder, you can add the entire Godot game project if you want to change every images.

Not the answer you're looking for? Browse other questions tagged rendering texturing baking or ask your own question.

3
How to export amodel from blender with textures and animations to use the model in Irrlicht?
6
How to properly use git with blender?
6
Understanding the nature of a Blender render
2
How to bake glossy materials?
1
How to make Blender render in real-time, as fast a computer game?
1
How to render small object, as pixel art, without loosing any of the pixels (Cycles render)?