Is it possible to guide a smoke simulation along a curve?

Is it possible to have smoke and flames, or just smoke, to flow in the direction of a curve?

I'm aware that I can use a particle system guided by the curve and then emit the smoke from the particles, but this will not do for the effect I'm trying to achieve since the flames still go up and not in the direction of the curve.

Also I'm aware that I can add a wind forcefield, but that will only push the flames not really guide them along the curve.

Yes, this is possible - you can use a Force forcefield set to act along a curve and set to a negative strength to draw the smoke to the curve as in the following example : 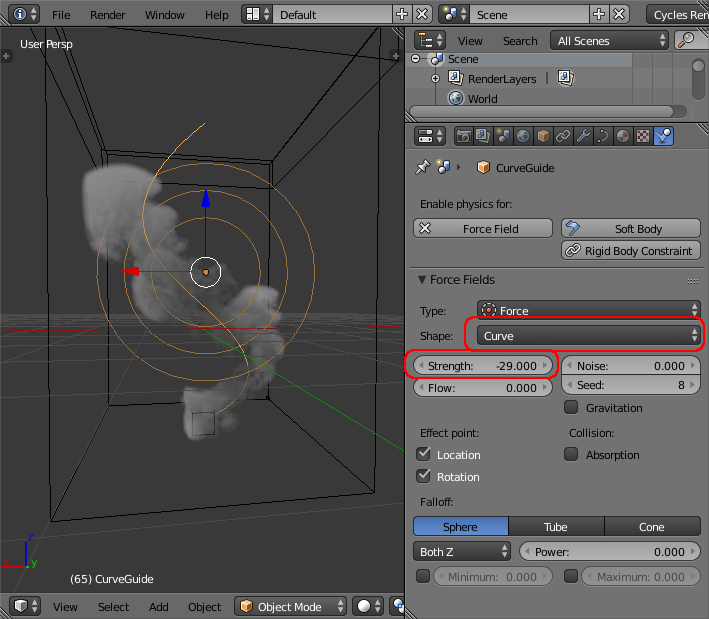 However, this isn't intuitive to set up as the 'curve' type is not normally available on Force fields - so this is possibly unintended behaviour - but useful nontheless. Note that this works on Blender 2.79b.

To set this up, first add a Curve Guide force - the Curve Guide doesn't actually affect the smoke simulation but does allow a curve to be defined for the direction of the force. Use Edit mode (Tab) to edit the curve into the desired shape.

Now, change the Type in the Force Field physics properties to Force. Since this force now has a defined curve you should see the addition 'Curve' option in the Shape drop-down list. Select this to have the force act along the curve.

Set a negative strength to have the curve draw the smoke together rather than blow it apart.

EDIT : I recently discovered that it’s also possible to add the curved force another way - instead of ‘fudging’ the force type (as above) to get the curve you can simply add a curve to the scene (bezier, nurbs) and add the force to the curve using the Physics tab. This then allows you to set the force to Curve as described above. Similar applies for surfaces.

Further Edit : The provided file doesn't load correctly in more recent versions of Blender - it is not successfully converted to Mantaflow. Instead you can simply build the simulation as follows :

10
Particles as smoke
3
Make Flames stick close to the surface instead of rising upwards
1
Blender Render (Internal) How to control smoke direction?
1
(Internal) fire Simulation with wind force field is too curvy
1
Particles Not Emitting Smoke
0
Smoke Simulation in Blender 2.92