Details of the mesh: all separate parts recently joined into one mesh; has one main UV map and two additional UV maps for two more detailed parts of the mesh; has a simple Cycles material that only uses a handful of image textures: baked and hand-painted textures combined with a normal map.

I have prepared an image for the final diffuse texture and another for final normal map to be used with the model in the game engine. Problems arise when I'm trying to do these final bakes. During baking normals Cycles decides to switch to the already existing AO image (named AmbientOcclusion in the screenshot below) and then bake the AO (not normals as I have requested) again on the final normal map that I have specified as the bake target image. Still following? This image might clarify things: 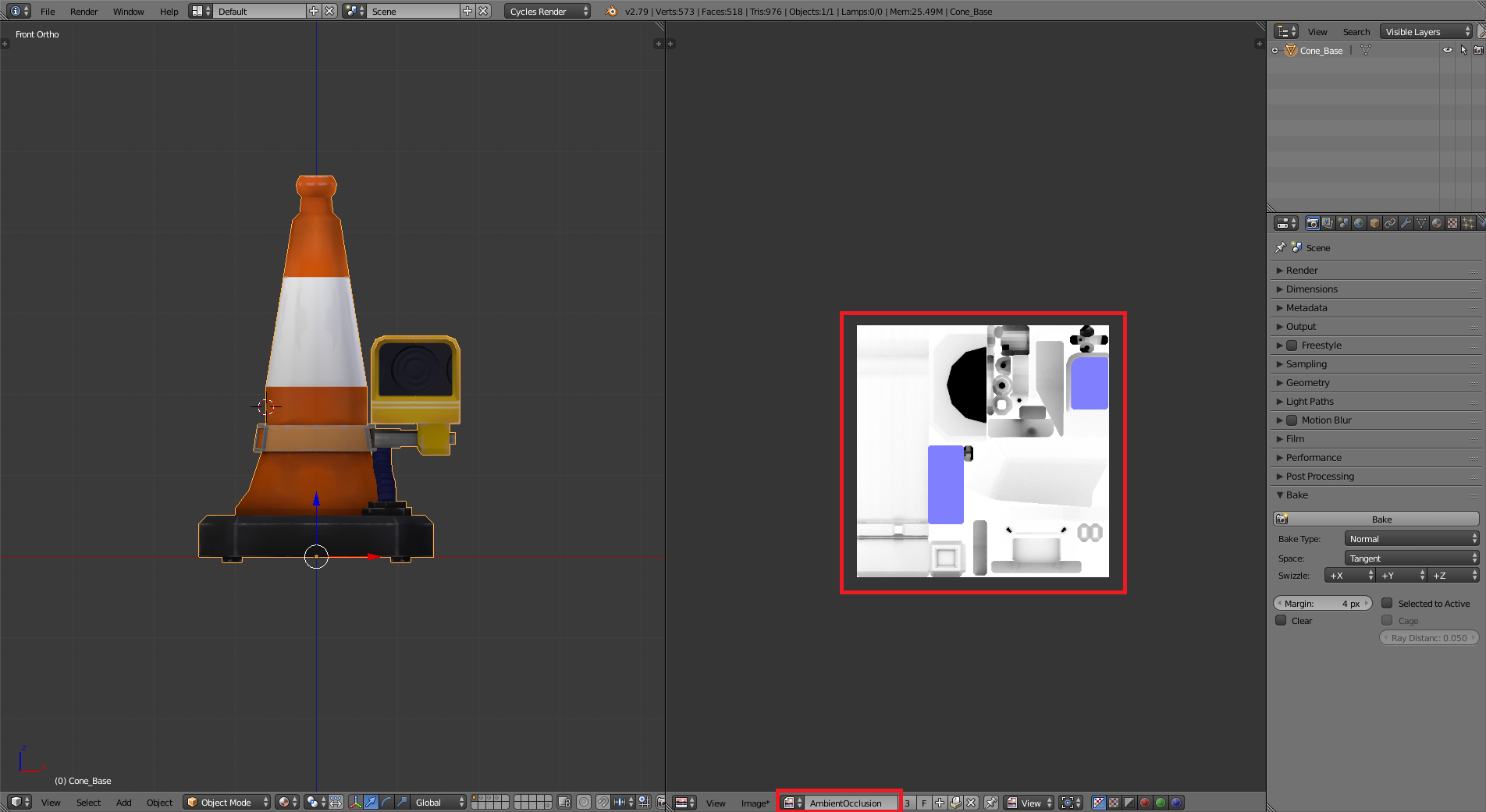 And yes I do have two image nodes in my Node Editor ready for the corresponding final texture (diffuse map) and normal map. 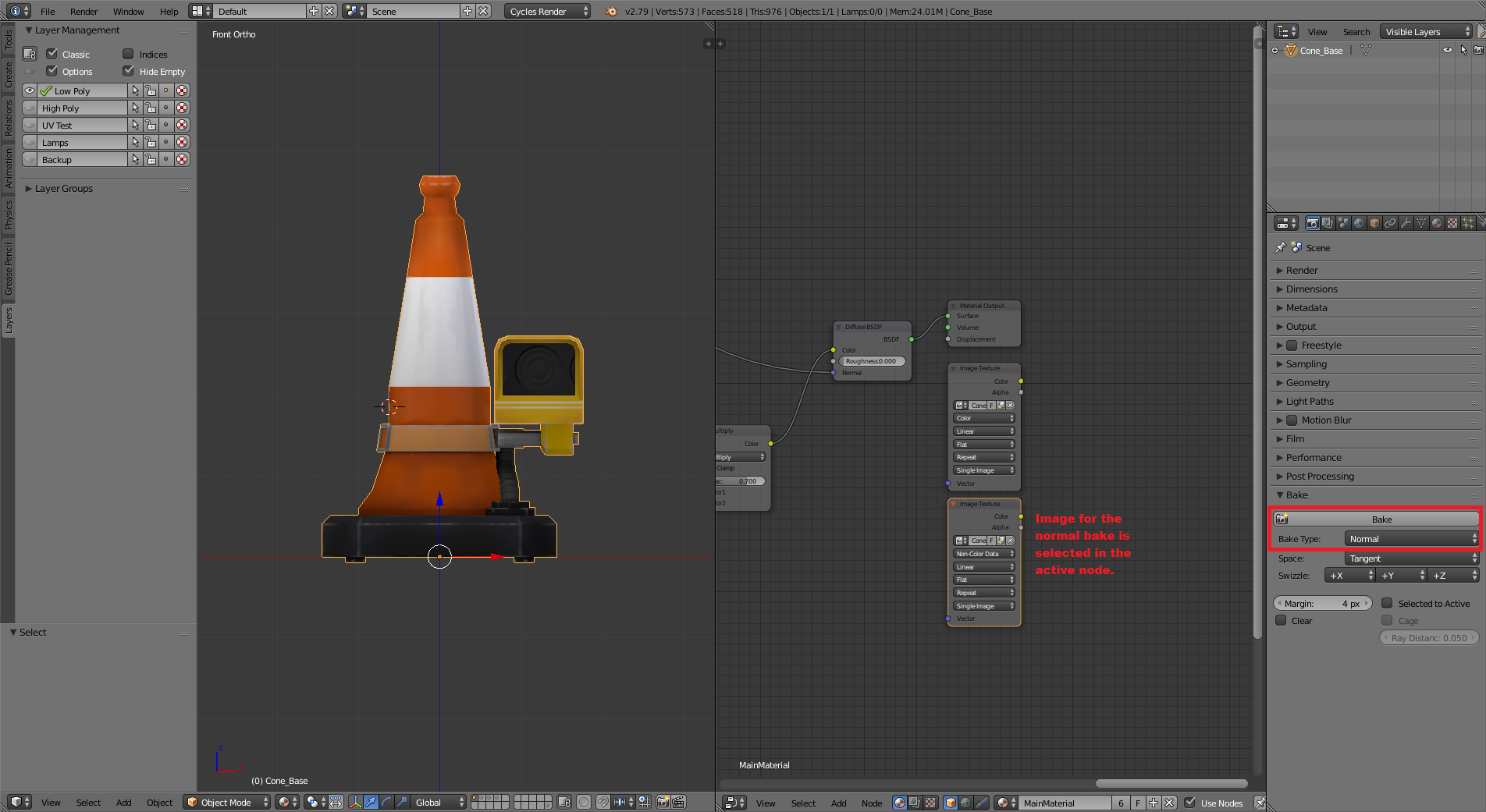 Can anyone help clarify if I am doing something awfully wrong or if Cycles is making me go crazy? I see no logic in it's behavior when I select 'Normal' in Bake Type, click Bake and end up with AO on top of my normal image canvas. I have restarted Blender and my computer to see if it was just a reference issue or something but alas, no luck.

EDIT: In fact, when I try to do the diffuse bake (with only color selected in bake settings) Cycles manages to bake on the right image even though the information displayed in the info bar is still wrong:

...because I'm baking diffuse on to a image named ConeHat_d.

Alright, after some hours of needless research I figured it out on my own.

My model was using 3 separate materials: one for main mesh, one for camera details (painted and baked textures) and one for cable ribbon details (also painted and baked textures). I had placed two image nodes - one for final diffuse texture and one for final normal map - only in the main material. I had to copy the two nodes also to the remaining two materials I used for detailing. Now baking worked as it should.

I imagine previously when I hadn't specified the bake targets for the remaining two materials Cycles was just picking a random texture node already present in the node tree and baking on top of that - and in this case it was my ambient occlusion map which was shared among all the three materials.

Hope this helps others struggling with trying to bake multiple materials into one final texture.

Try to select the Image texture you want to bake to in the shader editor. In my case it helped.

2
Baking to an image using cycles with two sets of existing uvs
10
Baking normal map from a cycles shader with normals
10
How to pick target texture image for baking?
5
When using a baked normal map it is inverted on half my model
1
How do I bake multiple texture maps into 1 UV, In Blender Cycles?
0
Creating a Single Image Texture Bake From A Complex Object - Broken Textures Result in 2.9
1
Cycles Bake - Noise texture becomes flat color
0
Can't Bake Texture Properly, It Looks Pixelated Even Though I'm Baking the Diffuse And Normal
0
Why are my Baked Textures having Bad Results?