I'm creating ice material, and it works fine, but only in viewport or with background (i.e. disabled Transparent in render). Here is my Nodes with result in the viewport: 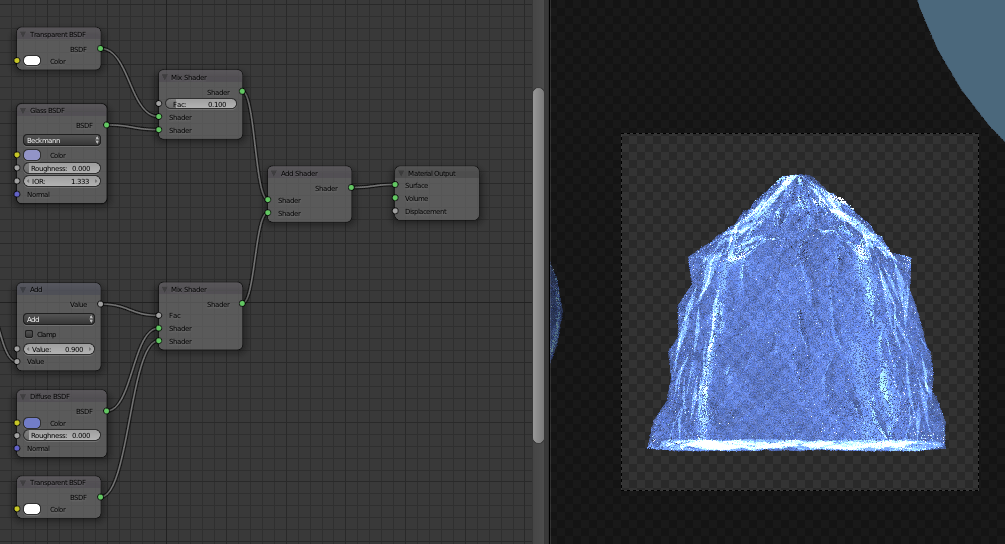 But it isn't drawn in render: 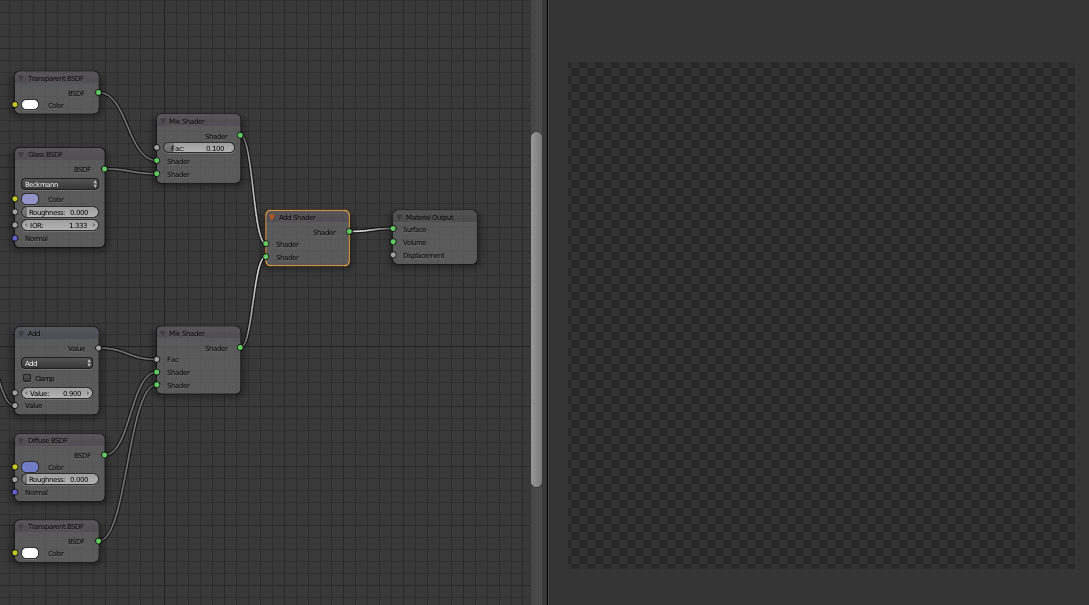 However, if I skip last Add Shader and use one of Mix Shader, it somehow works: 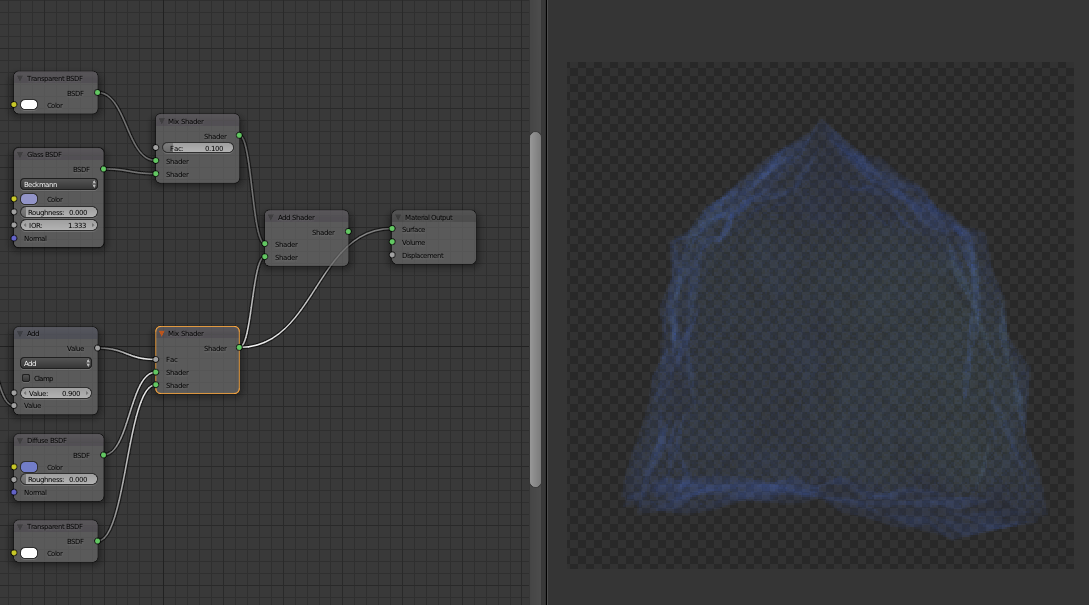 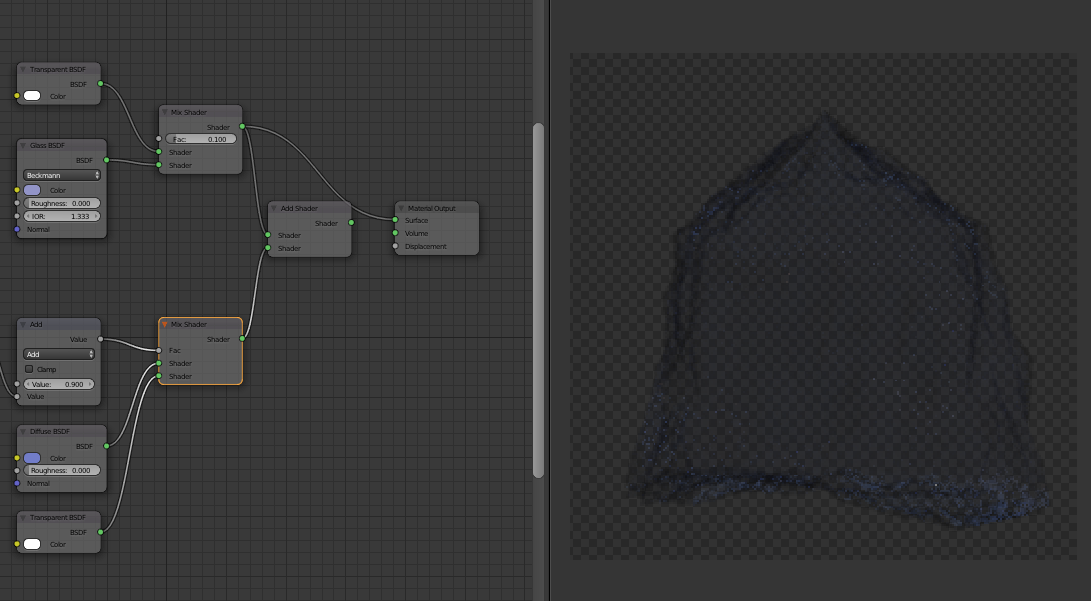 Also, as I said, it works fine if I disable Transparent in Film section of Render tab: 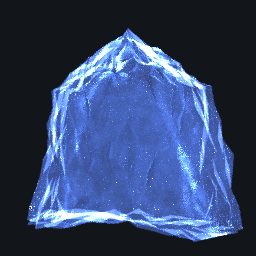 But I need transparent background! With all the nodes working. In addition, I figured out that the problem is due to mixing 2 Transparent shaders, they somehow affect not only colours, but the following nodes. But I believe if it works fine in the viewport, it is possible to solve for the render. How can I achieve it?

You need to be very careful when using the Add shader as it is not physically accurate and can produce some unexpected results - as you have discovered here. This is actually “expected” behaviour when you understand how the Add and Mix shaders actually operate.

A shader effectively defines how light hitting a surface contributes to the light leaving that surface - some will be absorbed, some will be reflected, some will pass through. This occurs for each of the Red, Green, Blue channels and, also, in the case of ‘transparency’, for Alpha.

The Mix shader takes any teo such shaders and ‘mixes’ them together proportionately. For example 50% of one and 50% of the other, or 30% or one and 70% of the other, etc., but, importantly, always adding up to 100% (an unconnected input socket effectively counts as pure black).

When you use the Add shader the same ‘safeguard’ of only ever having 100% of a shader contributing to a surface no longer applies. This means that you can have more than 100% of any element present in the resultant surface.

Using other values can actually result in values that are greater than 100% and this can produce even stranger results when combined with other shaders.

The upshot of all this is that you should be very careful of using the Add shader unless you have a very good reason - for example, adding an emissive glow or combining Scatter and Absorption shaders. Normally just use a Mix shader.

Not the answer you're looking for? Browse other questions tagged cycles-render-engine rendering materials node-editor transparency or ask your own question.

4
White background for animation
13
Render semi-transparent volume with cycles
2
Rendering Environment pass without Combined pass in Cycles
2
Rendering a semi transparent object on a transparent background
2
How do I render in blender 2.8 to get the same result as I see in viewport?
3
Cycles. Masking objects with shaders (no compositor)
0
Problem mixing 2 transparent shaders as two different layers
0
Single color render background with orthographic camera