Blender as Python module; link to the correct pythonXX.dll?

I am the maintainer of a blender as a python module 'bpy' on pip and github.

I am able to build blender pretty successfully. I have wheels for multiple python versions created. This allows extension authors to install the module bpy into a venv for unit testing of their extension, without comprimising their Blender environment.

Currently though, it only works in Python 3.6 (the current version of Python that Blender supports).

I would argue that it could be useful for such extension authors to test their extensions against upcoming versions of Python as they come out.

Would it be possible to link blender against the new python37.dll?

Currently what I am doing is I install bpy into the python 3.7 venv:

Then, I start a new Python session and attempt to import the package:

ImportError: DLL load failed: The specified module could not be found

Then, after copying and pasting python37.dll and renaming the copy to python36.dll, my fears were confirmed, it is trying to use python36.dll:

ImportError: Module use of python36.dll conflicts with this version of Python

Is there a way to, intuitively, tell blender when its building to target a certain version of Python?

The build scripts can be found in ./vscode/tasks/build_all.bat

Here is an image of the PYTHON variables from CMAKE; I don't see PYTHON_LIBRARY, though

Here is a picture with the grouped variables: 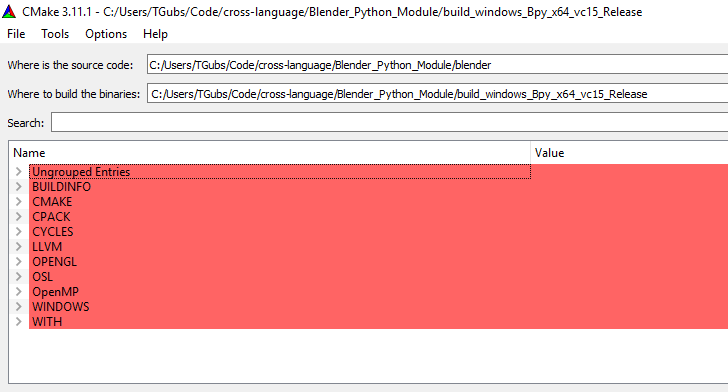 2
Error: import Point3D of Geometry Module of sympy0.7.5 in Blender2.71
2
Blender 2.78c on CentOS python environment
2
ImportError: dynamic module does not define init function (initbpy)
4
A working guidance for building blender as bpy python module?
2
Installing Python 3.6 on any version of Blender
1
ModuleNotFoundError: No module named 'bpy'
1
Why can't I add pip to the version of Python that comes with Blender 2.91.2?
2
What are the pros and cons with using the Blender installed Python or the system Python?