Compositor: How to crop an image into multiple versions?

For cases where we want to batch process an image into multiple versions, it's fairly straightforward if only changing the scale. But if we want to vary the cropping things get complicated. This is because using the Scale node's Crop mode on either Render Size or Scene Size. Neither of these values can have multiple instances or be key-framed to change over time.

In the screen shot above, the resizing (cropping) only works correctly because the Render Size is set correctly. 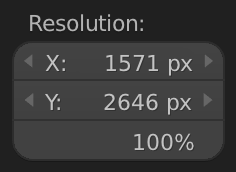 But this can only be done once. Even if we create another scene with different render dimensions, only the current scene gets used by the Scale node.

Using the Scale node in Absolute mode causes stretching instead of cropping.

It seems like there should be a way to do this. Am I overlooking something?

Update: I've made some progress with the size by using a Translate node followed by a Crop node, but the crop is off-center.

This can't be done in Blender, because the image pixel dimensions will always be that of the Scene from which the Render button was pushed.

I used a File Output node to test this, saving rendered data from different Scenes, each with different render dimensions. Their dimensions were overridden by the dimensions of the main Scene.

I'll post the .blend for anyone curious. It's nothing special.

What this means is that even if you use nodes to get the scaling and cropping right, you will just end up with transparency around the image. (If scaling up your image will be clipped instead.)

This sort of task should be done with other software, such as imagemagick or Photoshop (using Actions). Here is how to do it with imagemagick using scripting.

Not the answer you're looking for? Browse other questions tagged compositor image scale or ask your own question.

18
How can I resize/move the “canvas” of an image in the compositor?
3
Adjust the image offset and image crop for multiple strips
1
How can I combine two colored textures so that the final image is blended to match a specific lighting setup
3
How to crop image based on Alpha in Compositor?
2
How to make overlayed composited images stay intact while changing render resolution?
3
How to keep procedural texture proportion automatically
1
Use Multiple Image Editors in Compositor