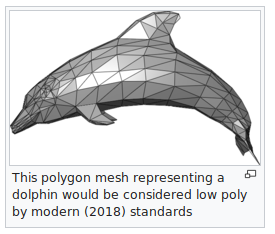 What are the standards to which it refers? (https://en.wikipedia.org/wiki/Low_poly)

The term standard is not used in the sense you think. It's not like an SI units standard or sRGB (literally meaning standard red green blue) standard. There is no definition for lowpoly, other than it needs to display in real-time. It depends on hardware.

By modern standards (standards in hadrware) it is safe to say that the dolphin can be rendered in real-time and so would be considered low poly.

By ancient standards (4bit computer the size of a room) you wouldn't be able to render that at 60fps, it would be considered high poly.

There are no standards! Low poly is always a relative term. There are several factors that decide whether it is low or high poly. It is also described in the same article.

But think of it as trying to decide if a room is minimalistic decorated. A large living room with 30 items can be minimalistic, but if you place the 30 items in a small corridor it is not. There are no guidelines and is more of a assesment from room to room - the same can be said of low / high poly

Not the answer you're looking for? Browse other questions tagged modeling texturing edit-mode or ask your own question.

0
Blender General Best Practices (to affect a game's performance as little as possible)
1
One vertex, how many triangles ok for game?