Body part recognition inside of blender using a neural net

So I'm working on a project that's turning out to be monstrously difficult. I'm trying to automate the rigging process inside of blender using the addon "Auto-rig pro". This addon has a feature called smart rig that automatically places a skeleton into a mesh. Using this I've been able to automate everything but one step.

In order for the rig to be created automatically you have to manually place markers on the neck, chin, shoulders, wrists, ankles, and groin. If you've ever used mixamo's autorigger it's basically just that. So in order to fully automate the rigging process I've resorted to using a neural net.

I've been doing a lot of research on machine learning, but unfortunately it appears that I'm the first to attempt something like this (as far as I know). After significant effort I've managed to install Tensorflow and Keras into blender, but I start running into problems when I try to figure out how to feed the data to the neural net.

Normally a neural net is fed raw images, but I need to feed it the 3d view. The marker placement is done in a straight on orthographic view, so I only have to worry about 2 dimensions here which is nice. I could render each model as an image and input it into the neural network, then have the neural net output the appropriate marker coordinates, but rendering takes time and this method seems somewhat unreliable.

Honestly I'm feeling pretty damn overwhelmed by this whole process, I'd never written anything in python until a few days ago, and I've never tried to make a neural net do anything more sophisticated than recognizing simple number patterns.

If you have any suggestions or ideas at all I'd love to hear them and I'm happy to answer any questions you have. Just feeling like anyone other than myself is considering this problem would mean a lot to me.

Also I apologize for any typos/grammatical errors I may have made. After working on this whole neural net dilemma for 8 hours straight my brain is pretty much completely fried.

Consider this to your approach:

You probably want to Access Render Result pixels from a script.

From that question, there are two possible methods, which both result in a numpy image which you can feed to tensorflow. You will probably have to reshape it since tensorflow excepts a non standard shape.

Create an orthographic camera directed at your model.

This first method utilizes the Viewer Node Hack. With it, we can't use opengl, but in my test Blender Render could be setup to run very quickly. I display the image at the end with opencv2, but that wouldn't be necessary.

The second method works with opengl, but requires saving the image and opening it. We can't use the Viewer Node Hack, because the OpenGL render does not get Postprocessed with Compositing.

Both methods use rendering, but it can probably be setup to be quick enough. My non-optimized renders took less than 0.4s. 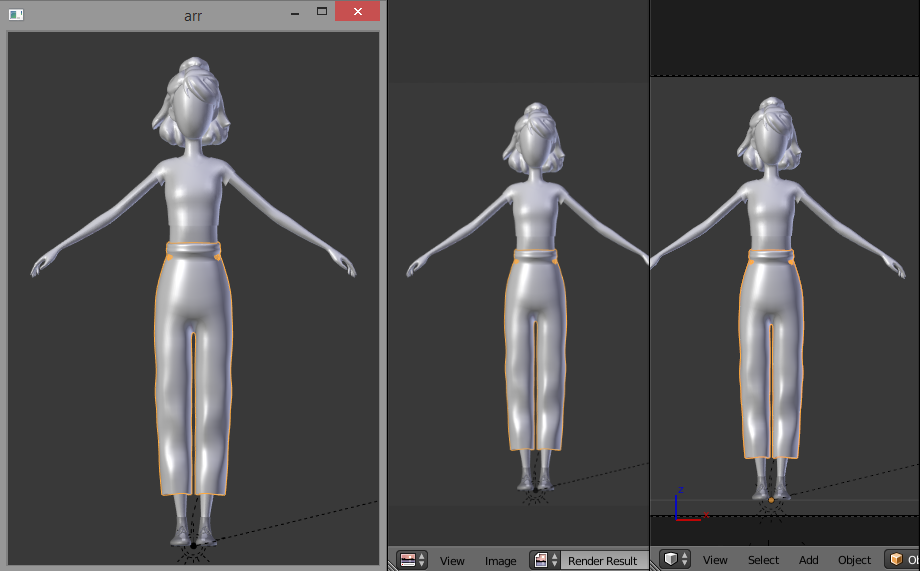 Not the answer you're looking for? Browse other questions tagged python scripting auto-rig-pro or ask your own question.

15
How to access Render Result pixels from python script?
1
How to use blender for reinforcement learning? How to control camera movement and save the rendered images that the camera captured?

12
How can I separate a single object file into multiple objects based on closed geometry?
1
Script working only inside blender
3
Add a Custom c++ Class to Blender and drawing it in the viewport using an Addon