How to achieve a realistic material for an operative phone screen?

I'm trying to recreate an electronic device where the screen is ON - like this: 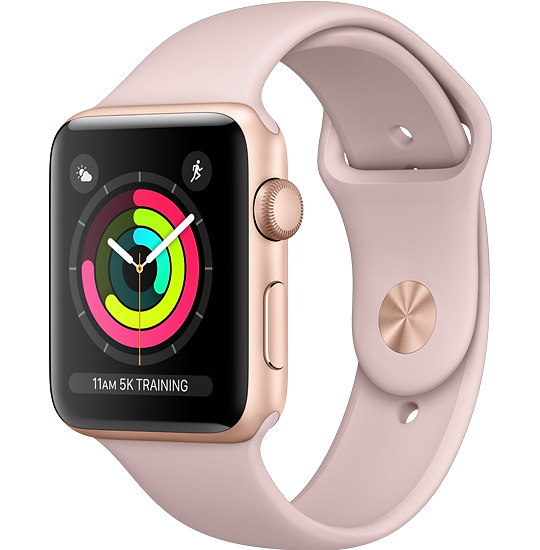 I can easily achieve the off version, just a glossy sharp black material, but as regards the "on" version, displaying an image that looks like it is behind a pane of glass and "emitting" a texture, so to speak, I have no idea.

This basic kind of node setup should work okay for you. The most important nodes are the ones I highlighted: the Emission, Principled, and Add Shader nodes. For your setup, use your existing glossy black material instead of the principled shader node. 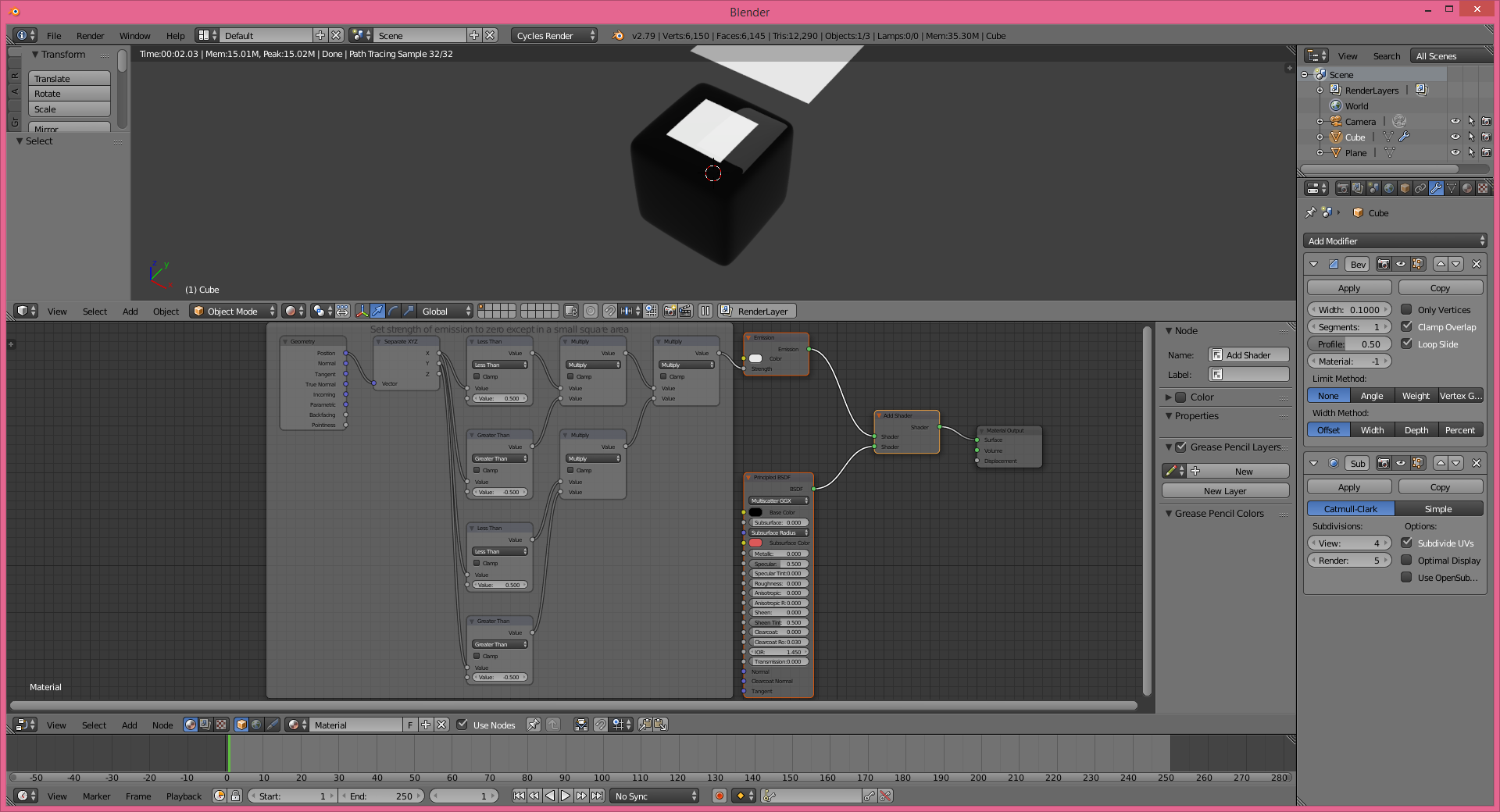 Here is another setup where I've instead UV unwrapped the cube and used an image with a transparent background. The image texture node's extension mode is set to "Clip" instead of the default "Repeat" so the image is only displayed once, instead of repeating all over the cube. 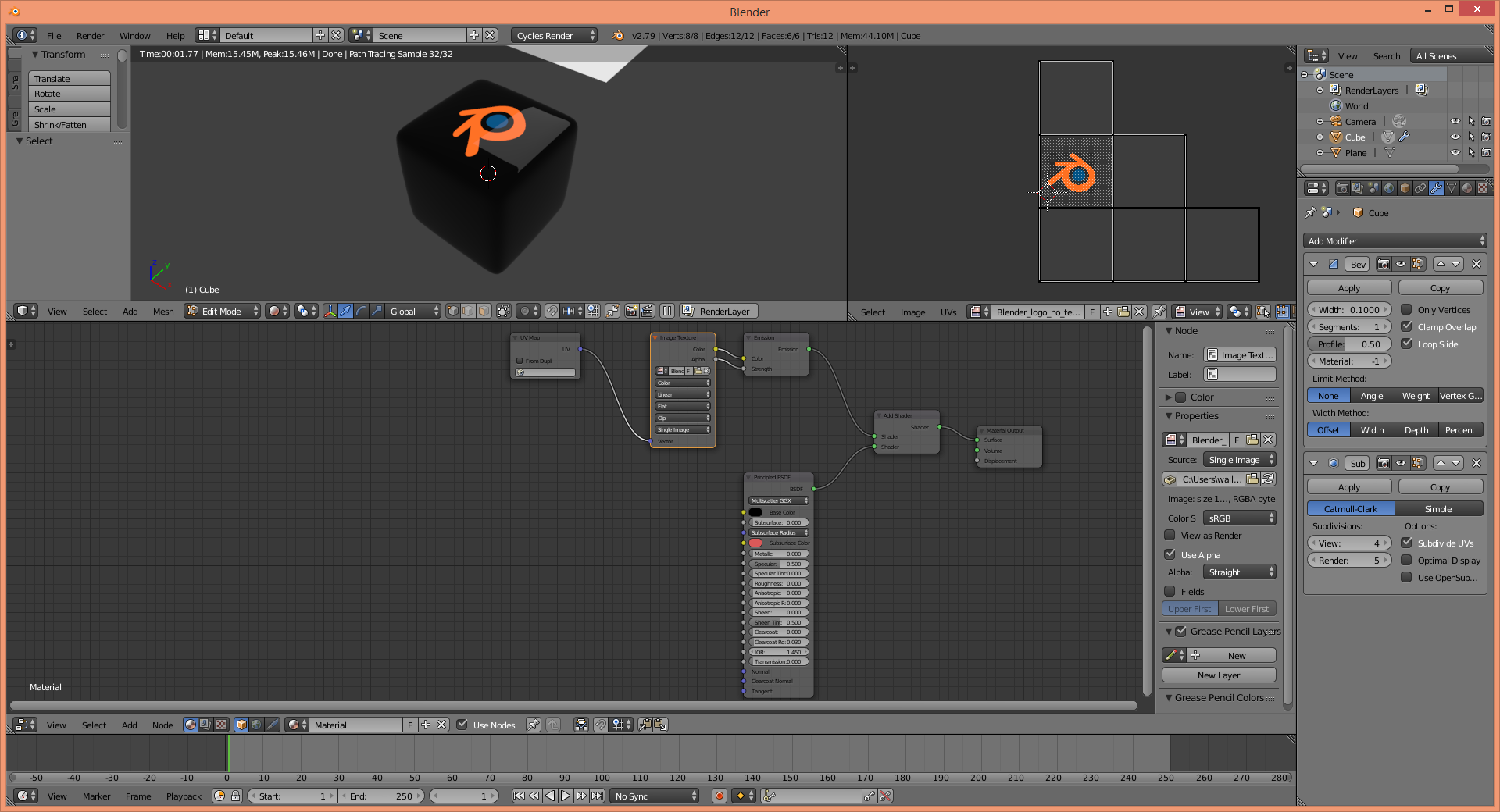 Here's an alternative method that deals with : 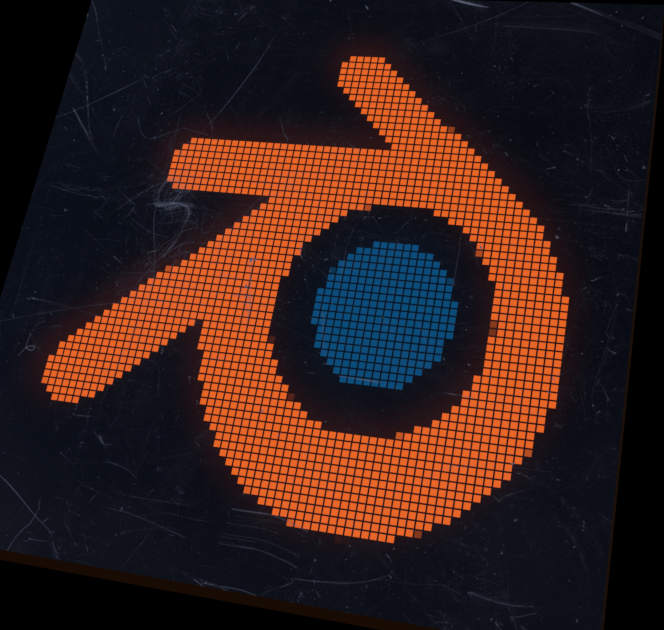 First to the parallax. This is the effect where the screen image moves in relation to the surface due to the viewing angle - due to being set behind the actual surface. This could be modelled by placing an additional (glass) surface in front of the 'emissive' surface but can actually be faked using vector maths similar to https://blender.stackexchange.com/a/84618/29586.

Next for the surface reflections - this is easy to achieve with a basic Fresnel arrangement to mix a Glossy shader with a small amount of roughness to slightly spread the reflections. 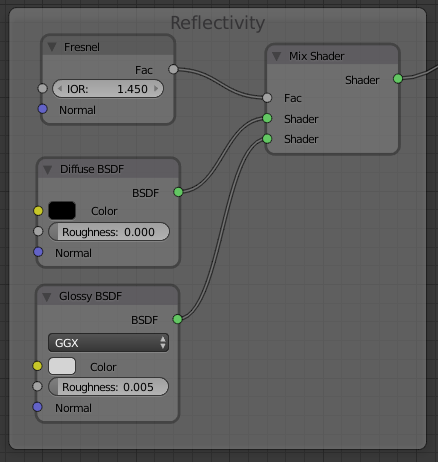 To make the image appear pixellated we can use the Modulo function to convert the input coordinates into discrete "steps". Some additional maths can detect when the point in the texture is close to the edge of one of these 'pixels' and 'black' it out so as to produce a dark border around each pixel. 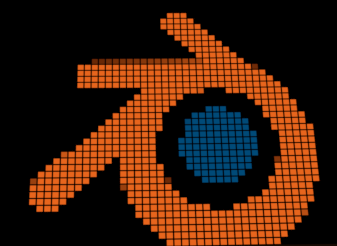 The bright image projected onto the back of the glass may produce some scattering or 'glow' below the surface, spread out by adding some Noise to displace the coordinates.

This uses the same 'pixellation' as for the main image (without the black border as it's an unnecessary complication since the result will be blurred anyway). The 'blurred' image will be in the 'correct' place on the screen rather than being offset to simulate the light being projected towards the screen causing a glow or scatter due to its high 'straight-on' intensity. Keep the intensity quite low so the effect is quite subtle.

Many screen technologies have limitations in the viewing angle where the image will become distorted or fade out at shallow angles. More Vector Maths can be used to achieve this by using the Dot Product to compare the Normal with the Incoming ray and using a Color Ramp to allow this to be tuned to affect the visibility as the angle changes.

Bringing this all together produces the following material :

The cyan nodes indicate parameters you can adjust - eg, the 'depth' below the surface of the emissive screen, the pixellation factor, the brightness of the emission and the glow. Also, you can adjust the color ramp to change the rate and angle of the falloff due to viewing angle.

And the final result :

(you'll need to add your own HDR for the environment)

Here's an example of a phone screen (screengrab from an iPhone) with a Bevel added to the edges of the mesh (which actually interacts with the parallax quite well when the image is close to the edge). (click to see at full resolution) 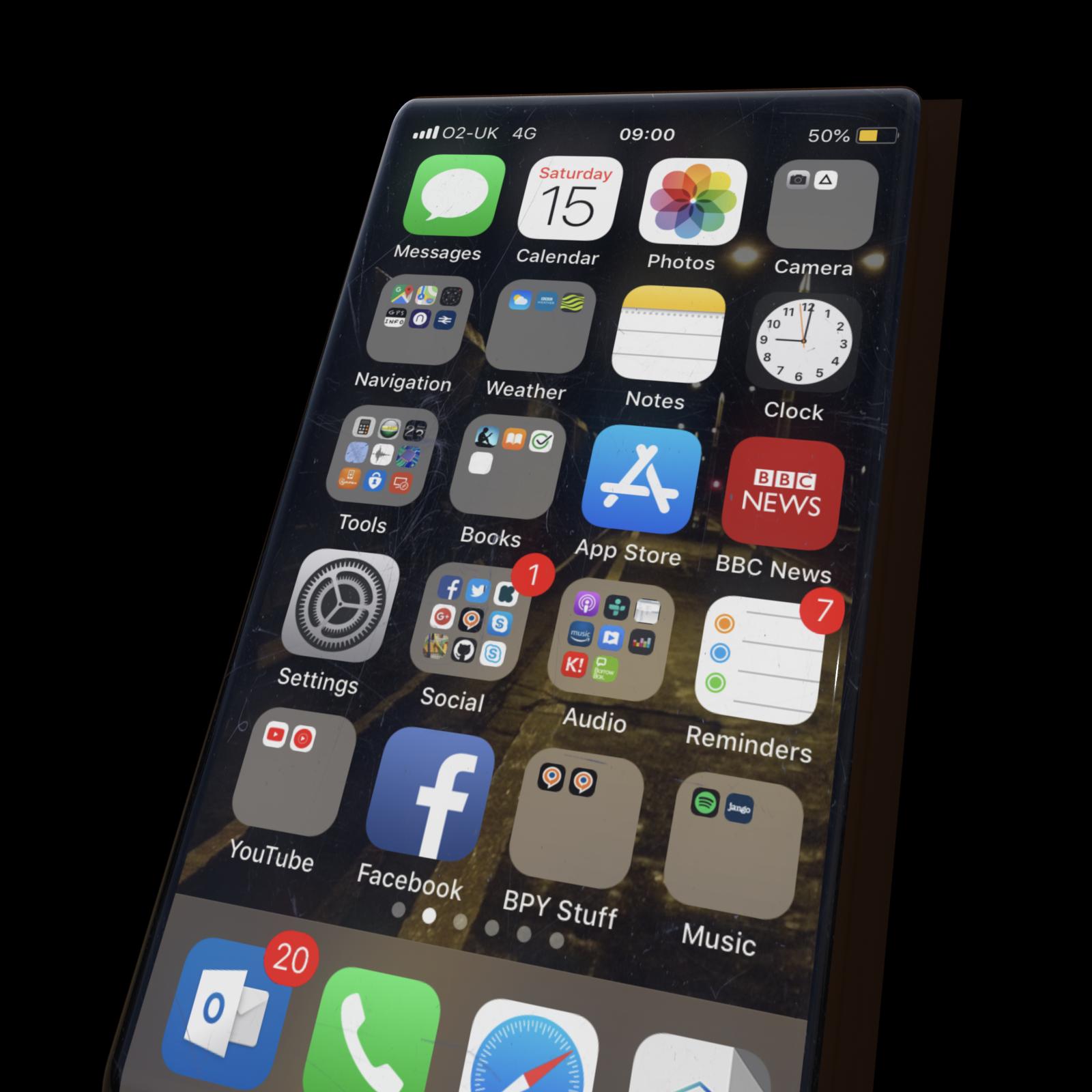 I would go with a separately modelled glass. Maybe it's just a taste question. At least there is this small thickness that indicates there's something on top of the screen object. 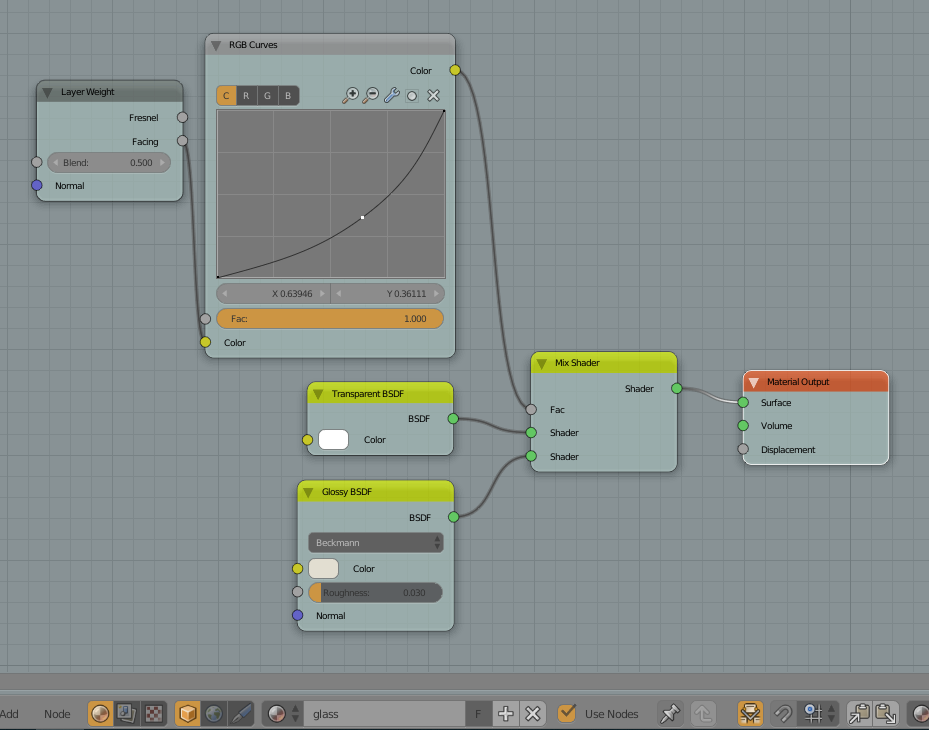 Not the answer you're looking for? Browse other questions tagged cycles-render-engine texturing materials nodes or ask your own question.

0
What's the physically correct way to mix an emission shader with a non-emissive cover material?
11
Is there a way to add fake thickness to an alpha image texture?
0
How do I pixelize this light screen?
2
How to create a false depth effect
0
Trying to find a way to make a true pixel screen
1
Led light through material
0
Simulate Monitor Backround light & wallpaper