I've been exporting animations from Blender to Unity for a while and I've never had any problems so far. Recently, I tried Mixamo, a free library of animations which uses a specific armature system. The auto rigger they have isn't very good, so I decided to download a model with their own armature in order to use those bones as a base for a better rigging.

The issue comes when I'm finished rigging the mesh and I export it along the armature in an FBX file. Blender adds the armature object itself as a Node in the hierarchy which, seems to break everything. I'm not using custom animations, but instead Mixamo's animations with a different skinned mesh. Therefore, I need the same hierarchy of nodes(as well as the same names) in the armature tree. 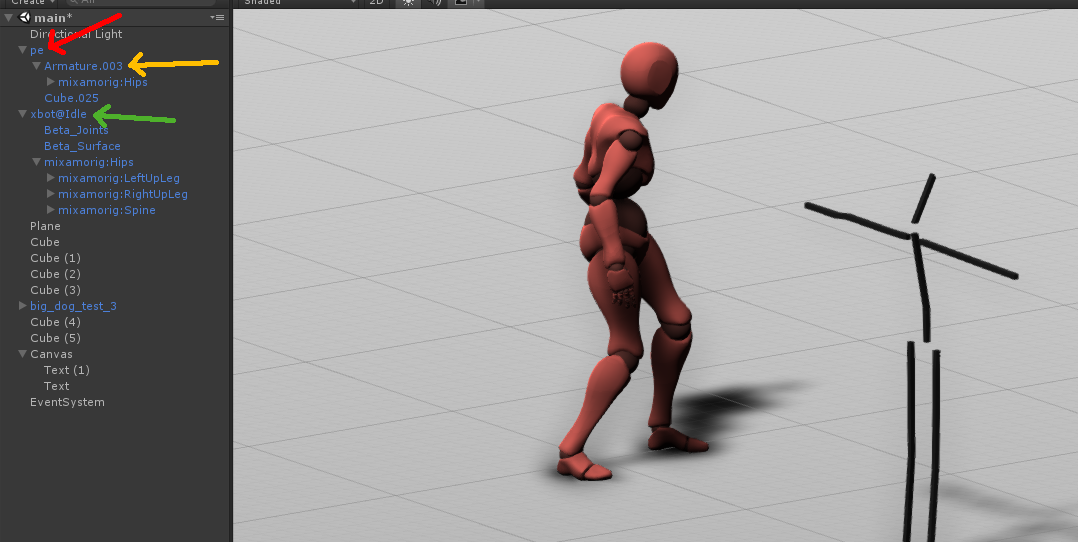 The exported custom object is marked in red and Mixamo's model in green. As it can be seen in the picture, the yellow arrow shows the extra armature node (which is the armature object in the Blender scene).

Does anyone knows a way to avoid this addition ?

Disabling leaf bones as seen here : FBX export adding extra bone doesn't seem to solve the problem either. I've also seen a few posts with a similar issue but happening with Unreal Engine, but I couldn't find anything that helped me.

I know it's a year late, but I've just had this same exact issue, so I would like to answer it here in case anyone else comes by this post.

The way to fix this in Unity is, after dragging the model into your scene, right clicking it and selecting 'unpack prefab'. Then, drag your hip object, that is parented by the unwanted armature node, up one level. You can then safely delete the armature node, and the animations should now work as normal.

Hope this will help some people, this behaviour isn't documented well enough for how annoying it is.

Not the answer you're looking for? Browse other questions tagged armature unity or ask your own question.

1
Can you apply an action to an armature that has more bones than the one that created the action?
2
Mixamo FBX and animation to blender
0
Eyes and rig problems when exporting to .fbx
0
Imported animation from mixamo to unity causes left hand to act unusual
0
Missing bone rotation when exporting FBX animation to Unity
3
Exporting armature without adding leaf bones - bone size change