I have these balls with Soft Body on, when the cylinders are still, they interact with them without issue and bounce off of them. But I animated the cylinders to move side to side (sort of like an obstacle course) and after baking it, it properly interacts with the collision objects like 80%, but somewhat intersect with the cylinders (the cylinders are moving at a fairly fast speed). Is there a setting I need to change to make sure the balls bounce around properly although the bars are going back and forth quickly? I have provided a link to the blend file. 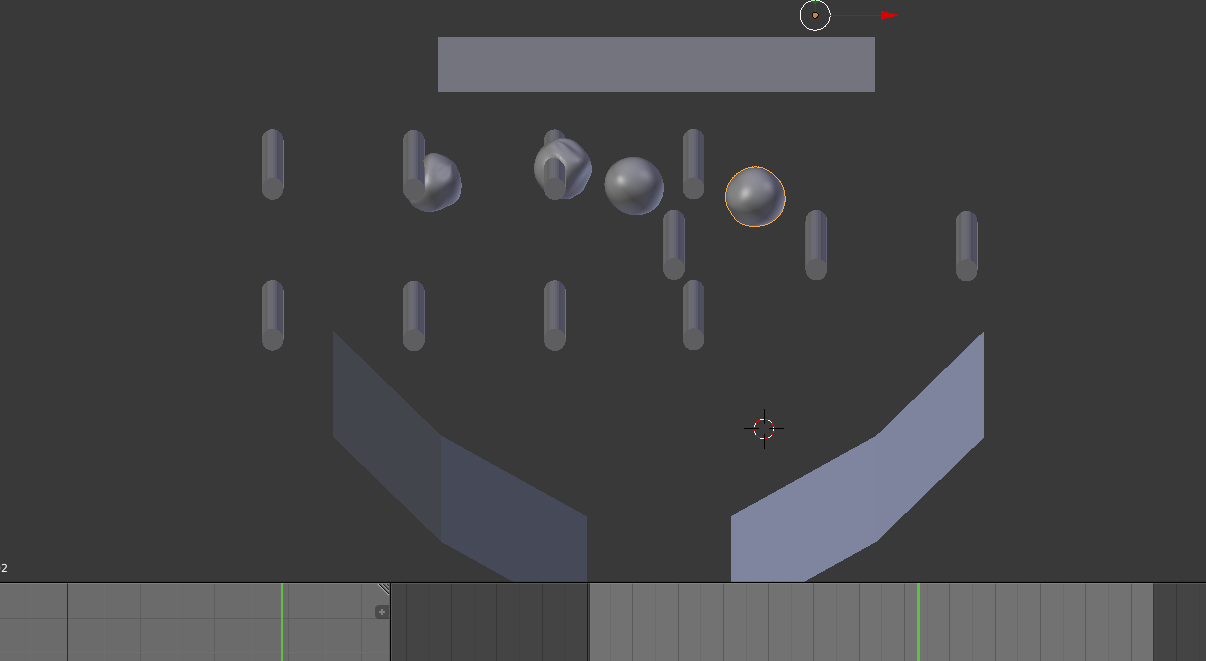 This isn't perfect but does improve the behaviour somewhat. I believe there are some limitations to the Soft Body simulation that make it very difficult to get consistent behaviour in your situation (where soft bodies are being 'hit' at relatively high speed by solid collision meshes). There also appear to be issues with baking the simulation - if the 'bake' is attempted while the timeline is at Frame 1 then performance seems to be fine. However, if the timeline is part way through the animation then the bake takes orders of magnitude longer to complete.... I suspect this is a bug but will need to do more work to pin this down. Anyway, regardless of that...

There are a few things you can do to improve your simulation.

For starters, you should always run your simulation with objects which have had their scale applied (so their scale is 1.0,1.0,1.0). The reason for this is that the simulation will assume they are at their natural scale and any physical properties will be base on that scale. In your scene the 'pins' have been scaled - but there are also keyframes on the scale to set it back again. Therefore, select each 'pin' in turn and remove the keyframes on the Scale properties. Once done, select them all and Ctrl+A and Apply Scale.

Once you have applied the scale you can adjust your collision properties to set each of the 'pins' Soft Body 'Inner' zone to 0.35 (from the default of 0.2). This value is chosen to be around half the minimum size of the pin - so that the collision zones are as large as they can be without opposing faces' zones overlapping. This should result in more chance of the soft body vertices being repelled in the correct direction.

Freeing all baked dynamics and then re-baking them all (after first rewinding the timeline to the start) should now produce better results - although it's still not perfect.

The next stage would normally be to increase the Step sizes so that smaller steps are used when calculating the simulation and reduce the Error Limit. This does seem to help to a point but beyond certain values the collision appears to get worse again - as far as I can tell there is a bug in the soft body calculation with very large number of steps, to the point where using a very large number (eg, 30000) results in very odd results where the soft bodies appear to be sometimes repelled and at others completely ignore the pins moving through them. I'll attempt to pin this down further and, perhaps, report this as a bug if I can.

Anyway, I hope this gives you some pointers. My best simularion was using about 100 soft body steps (100 for Min and for Max) and reducing the Error Limit to 0.01. This produced the following result :

One further point I noticed is that your scene is at a rather non-realistic scale - the balls are around 2BU in diameter which equates to 2 metres in the 'real' world. I don't know if this is intentional. This means that the 'pins' are about 0.75 metres thick and are travelling at around 12 metres per second! It's hard to imagine how a 75cm thick bar hitting a 2m soft ball at nearly 30mph would behave but it probably wouldn't be pretty!

To get more of an idea of a more realistic scale I scaled the scene down so that the balls are a more reasonable scale and produced the following :

Your "collider" meshes cannot be a plane. They must have solidness. Try adding solidify (from the modifiers) on them. They need to be solid at least by 1 cm.

14
Soft body to Soft body collision
4
Soft bodies bouncing with collision
5
Soft body and collision don't work
1
Soft Body Object-Collision Object Interaction Not Working
0
Modify Boid collision distance with hard boundary - v2.80
0
How to prevent 2 seperate meshes that have soft-body modifiers from clipping into each other and glitching, even if collision is turned on?
8
How can I make string tighten around a soft object