How to append .L and .R to my vertex groups with script - AND maybe how to duplicate

I'm trying to create a simple script that appends '.L' and '.R' to my existing vertex groups respectively. They already have an existing naming convention that begins with 'b__R' and 'b__L' and I don't want to change that, you can see that's actually an important part of my 'if'.

The mirror modifier does not recognise the L and R in its current format, so I just want to append the .L and .R then be able to remove it when I'm ready to import to my game. I want it to ignore central groups I have that do not have b__R/b__L in the name so that those just mirrors themselves into their existing groups.

Here's what I currently have, and it's not working:

I am COMPLETELY unfamiliar with Python just keep that in mind, I'm just taking guesses here. I'm really just using Python as a means to an end and copied and edited the script from an answer to a similar question on here (linked below).

How to remove a common prefix from vertex-group names?

Also, importantly - your opinion. Is this the best way to do it? I already have an L and R with assigned weights and groups BEFORE deleting half of my mesh (in order to use the modifier). I'm working with a pre existing mesh here. Or should I delete the groups associated with the side of vertices I have deleted to use the modifier, then use the script to also CREATE the other side's groups again? I ask this because I'm not really sure how the data transfer works in the former case and whether those groups will be holding onto information from the deleted vertices.

If it turned out that the latter is the better way to do it (make the script create the other side's groups again), how would I do this?

Sorry for the load of questions, I've avoided this aspect of mirroring the weights in the past because I'm not too clear on its effects in my situation. I'm more than happy to answer any questions for clarification.

Here's the error I'm getting when I Run Script in Blender. 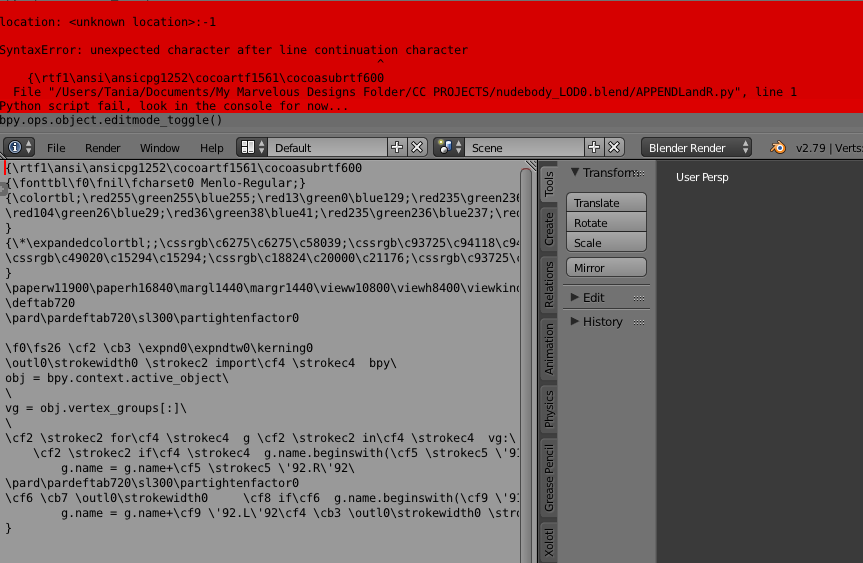 There are three problems currently.

Here is the corrected script.

However, I would suggest more changes.

These are a lot of obstacles for a beginner, here is the improved (changed) script, the benefit beeing to only need one.

Ultimately what was missing here was another look at the core issue. Only toggling a suffix on and off was not the answer. My groups had names that differed by one character to their counterpart and regardless of having the correct .L/.R suffix, meant they could not link to each other with the mirror modifier. Deleting the groups was not part of the answer as I had thought.

This is the code you're after if you need to achieve something similar.

In my case, remove the prefix that caused the group names to no longer be linked to their counterparts [4:]. Add the correct suffixes. Revert both of these changes when the script is run again for import back to game.

Thanks to my lovely sister for this script. Hope it can help someone else out there!

Not the answer you're looking for? Browse other questions tagged python vertex-groups or ask your own question.

6
How to view python error messages?
3
How to remove a common prefix from vertex-group names?