Using Python, how can I preset points in ShaderNode RGB Curves?

I have referred to https://blenderartists.org/t/how-to-modify-rgb-curve-nodes-in-compositor/503936 hoping the technique would be same or similar for shader nodes. I have also checked Is there a way of keyframing RGB curves? and How to make preset for RGB curves in compositor

But, although 'points[1]' is set correctly, the curve does not bend, and a straight line then goes from an existing end point through the new one -- having lost its 'other end' anchor (that presumably would have made it bend?). If I try and anchor both ends (0,0) and (1,1), then when adding the 3rd point so:

I get an 'index out of range' error.

Any help on properly adding and setting points would be much appreciated, thanks.

I spent the day looking for the same answer and had given up already because it's nowhere to be found, may it be in the documentation, StackExchange or specialized forums.

It was when I decided to replace the RGB Curves node with a ColorRamp that I figured it out, and it's ridiculously simple! If only it were documented anywhere.

In your case, I'd leave point 1 alone and add this at the end, removing the redundant update() line:

When you add a point update() is trigged, resetting the points' index based on their x location.

It makes easy to lose track of your points when you're also manipulating them. To avoid this, you can add all new points at (1,1), reposition them and do whatever you need; then execute update() at the end so they're reindexed in the new order.

This way your new points will always have a higher index than your existing points while you're working on them.

Here follows a sample script to add an RGB Curve node to the active material, add three new points and reposition them:

And the short version if you're sure you don't need to preserve indexes: 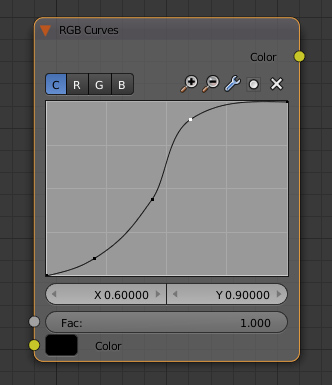 Not the answer you're looking for? Browse other questions tagged python cycles-render-engine scripting node-editor shaders or ask your own question.

4
Is there a way of keyframing RGB curves?
3
How to make preset for RGB curves in compositor

4
Is there a way of keyframing RGB curves?
8
More than 32 colours for gradients in Cycles?
4
Color Ramp vs RGB Curves in Cycles
1
Python: Store rotation / normal in bezier curve point?
3
How to make preset for RGB curves in compositor
2
How can you set Blender's Theme Preset with python
0
RGB Curves Displacement Symmetry