I have what most experienced Blender users would most likely consider to a minor problem, but to me, a nearly blind old man with numerous health issues who knows almost nothing about Blender, this is a real show stopper. All I about it is how to set up an Add-on named Blender2SCS, which sets up the program to allow importing, editing and exporting of SCS Software models from Euro Truck Simulator 2. In the game are various companies where the player gets jobs, picking up and delivering cargo in semi trailers. Once properly set up, the extent of my ability is to import company sign models and export them for use as other company signs.

Here's the problem I have. I'm getting very twitchy in my old age. I had just opened a sign model and I twitched, a particularly big one, and I hit the keyboard and the sign model I was preparing to export disappeared. I thought I must have closed it and went to re-open it. Everything seems normal when I open the program, select my Operator Preset, etc. But no matter what model I open, the work area in Blender is all text, which is so small I can't read it. Normally, I would copy it and put it in my text editor and see what it says, but it won't let me copy it. Looking at a zoomed in screenshot of it, I can see it is Python code.

I have no idea what changed or how to set it back to displaying models again. If anyone knows about whatever mode this is and could tell me how to set back the way it was before, I would greatly appreciate it. I know I could install the latest version and start over, but it's possible that Blender2SCS won't be supported in it (it's no longer in development) and I would have to revert back to 2.78c again, so I wanted to see if anyone could tell me what happened and how to undo it first.

PS; I did not know what kind of tag this required, and your page for listing them isn't available. So I chose "modeling", even though it may not apply. It wouldn't let me use "settings".

Well... Now I am really showing my ignorance about Blender. Last night I tried everything I could think of. I clicked on anything and everything that looked like it might be the right thing to change it back, and found nothing. But as I was making a screenshot, I saw a button I didn't see last night (my vision is clearer this morning) and I don't remember what the label said exactly, but "previous" was part of it, so I clicked on it and it changed it back to the model I had been trying to export last night.

But it's Murphy's Law of Seeking Help... As soon as you ask for help, you figure it out yourself!

It's likely you maximised the area for the Info pane, otherwise known as the error report window... Which tends to make for horrific reading.

Hidden under the topmost menu bar is the Info pane. 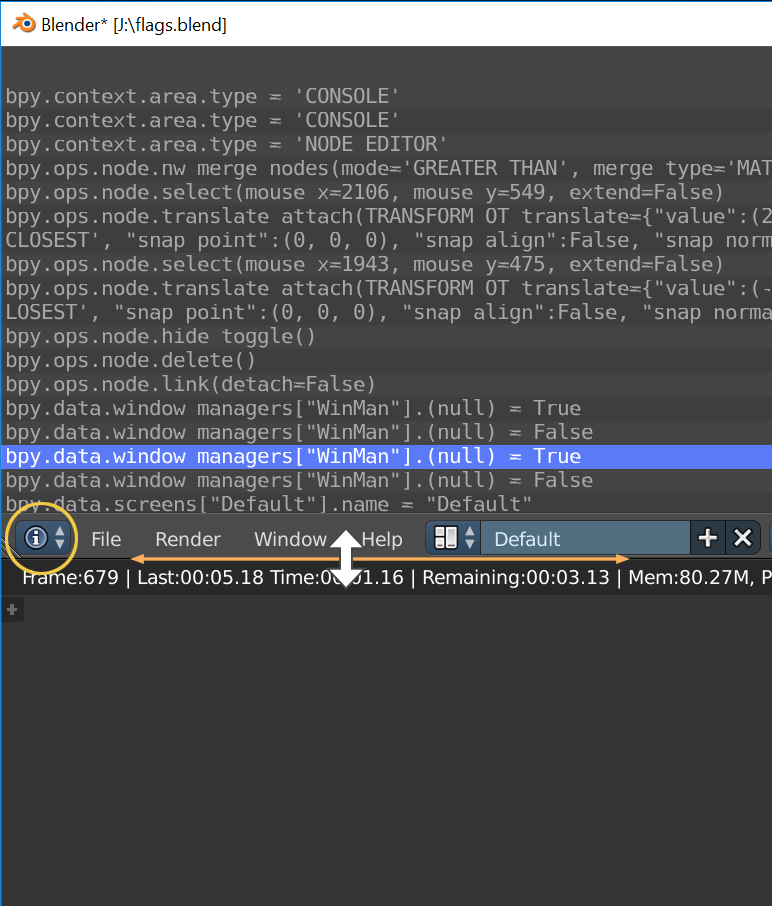 For a casual view of it, position your mouse on the menubar border (orange) and left-click-drag the border down. And drag it back up when sufficiently appalled.

It's likely you accidentally RMB-ed the Menu bar slightly off-target (or, hit CTRL-Up Arrow on the keyboard). The RMB pops up a short menu, inviting you to 'Maximize Area' (of the Info pane). CNTL-UpArrow does the same thing without the pop-up Either way, Bam: a screen full of Python Hell.

To Fix: Put the mouse in the window and hit CNTL-Up Arrow again. Or CNTL-Down Arrow. Or if you've just revealed a part of it, as you see in the image, drag the pane back up (but this is fiddly: I'd recommend the Arrow keys.)

Best way to think about the UI is like this: All windows have a menu bar UNDER it. So that top menu bar must have a window associated with it... We just can't see it.

Whatever the cause, using the "Back to Previous" button was useful, but the problem persisted. As it turned out, my solution was the best idea I've had since I started using Blender, which was to update to 2.79b. The first thing I always do when I update is increase the font since so I can see things better. That did not always work very well, as even though the text would get larger, the space for the text did not. But even though that put a limit on how large I can make the text before it became unreadable, I did what I could out of necessity.

When I went to do this time, I saw there is a new field under "Display" labeled "Scale". I set the Scale to 3.5 and for the first time, I can actually read all the labels and text in the program. To the developers, I say a great big Thank You for that! I might actually be able to learn something about Blender now, other than the few things I know how to do. I saw a video of a guy making a tire for an off road truck last night and I have to say it was very impressive. Now I need to find some tutorials for the Blender2SCS addon, as I can't figure out how to save a model if I modify it, such as moving or adding something to a model before I export it.

Thank you all for your kind assistance and suggestions.

3
Sub-models in scenes?
0
Going from an area of low information density to high density
0
How to animate a plane along a spherical area
0
Model Scaling Breaking Animation