I've been looking around on the internet (as well as in all the Blender settings) for solution, but nothing came up.

For whatever reason, since some recent point in time all the edge lengths in Blender show up in exponential form if they exceed 100 (i.e. 100 already becomes 1e+002). 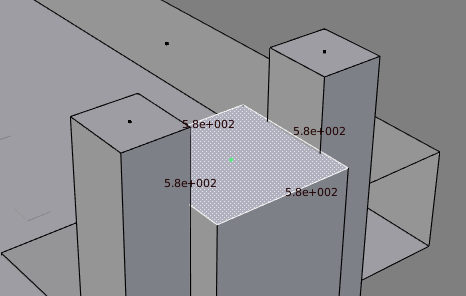 I'd rather have it show up in decimals.

Not only this is somewhat inconvenient to read, it also turns out to be imprecise, as smaller numbers are not represented in mantissa (1000 is shown as 1e+003, 1007 is also shown as 1e+003). Is there some hidden switch for this mode, or logic by which Blender selects it?

Alright... the cause of the problem is as asinine and unintuitive as it gets.

The scale of the Grid - even when it's not in use - affects the precision of any displayed measurment numbers. The relationship is inverse - the higher the scale, the less significant numbers you're shown.

Not the answer you're looking for? Browse other questions tagged mesh edges customization or ask your own question.

6
Is there a function to fix edge length in Blender?
8
Select edges by length?
1
How to create a plane about such dimensions as the length of other edge?
2
Creating a mesh cone with exponential radius
0
How to turn on vertex display while in edge/face selection mode?
2
Change edge information display in Blender 2.80 with python
2
Blender 2.8 edge length